See our Q4 forecasts to learn what will drive key asset prices through year-end!

Protectionist policies adopted by the administration of US President Donald Trump have created a trade war with China and caused significant volatility in the market. The outlook for future growth, multilateral trade relations and emerging markets looks bleak. Historically, protectionism and tariffs have produced political and economic instability and reduced global wealth by a substantial margin.

In the early 20th century, the United States implemented a set of protectionist measures that wreaked havoc on the domestic and global economy. Trade policies favored by the current White House are on a dangerously similar path, and therefore, warrant a look back to the Smoot-Hawley Tariff Act.

Following the “roaring”1920s, the United States entered into the Great Depression in 1929. As a response to the unprecedented economic downturn, Senator Reed Smoot and Representative Willis C. Hawley introduced a series of protectionist trade policies.

They were designed to shield the American worker – specifically those in the agricultural sector – from foreign competition. Trump imposed tariffs for the same reason, only this time it was steel workers he was trying to protect.

The proposal was strongly opposed by prominent politicians, economists and businessmen. They all approached President Herbert Hoover and urged him to veto the policy. The warnings fell on deaf ears, and the Smoot-Hawley Tariff Act was signed into law on June 17, 1930. Tariffs were raised on over 20,000 goods, with some reaching almost as high as 60 percent on particular imports. The Dow Jones Industrial Average fell 17% in June that year, the largest decline since the beginning of the Great Depression when the index fell by 20% in 1929.

Exports to Europe significantly shrank and deepened the depression in the region. Some historians claim that it contributed to the rise of political extremism. Global trade shrunk by approximately 66% between 1929 and 1934. It wasn’t until the latter year that the Reciprocal Tariff Act was introduced that allowed for bilateral negotiations between states.

See our study on the history of trade wars and their impact on markets!

EFFECT OF PROTECTIONISM ON MARKETS

This year’s imposition of US aluminum and steel tariffs, follow-on measures targeting China, and a stready stream of threatening rhetoric menacing allies with still more barriers is naturally causing a shiver to crawl up the spine of almost every economist and investor.

Global equity markets have experienced higher volatility, and risk-friendly currencies – such as the Australian and New Zealand Dollar – have gradually declined. Against the backdrop of a strengthening US Dollar and political turmoil, emerging markets have also suffered from the ongoing trade war. 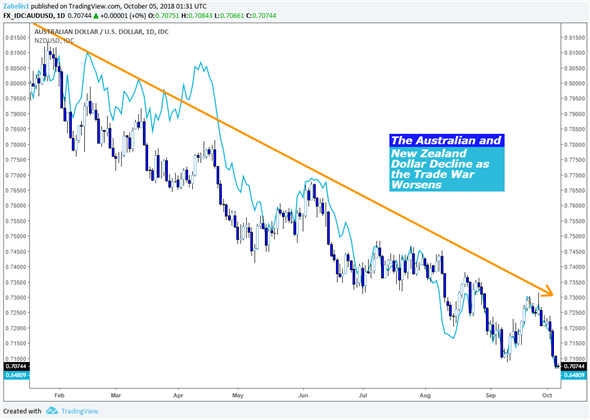 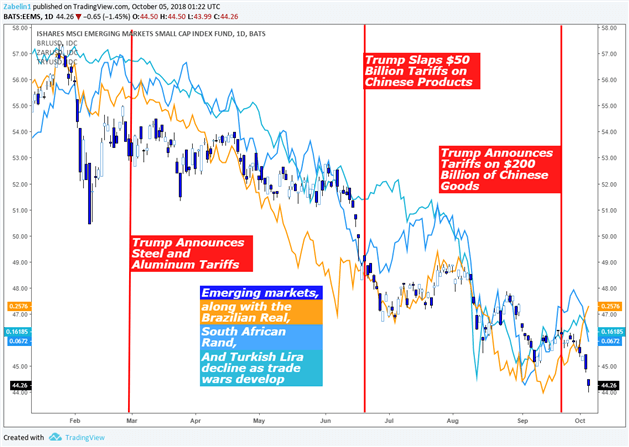 If Trump’s protectionism continues to be a central feature of his economic agenda, the outlook for future global growth and trade remain bleak. Pro-risk currencies and emerging markets are likely to experience a further decline along with greater volatility in equity markets.