Can Volatility Push NZD/USD Above Key Resistance as US CPI Looms?

The New Zealand Dollar is priced in for what could be intense price action in the near-term, and NZD/USD could soon face a critical resistance level. One-day implied volatility for the pair stands at 11.86% which is not only the highest of the majors, but it is also near a two-month high. The similar one-week reading is also the most elevated of the majors. Let’s take a look at what could drive price action.

Lately, the New Zealand Dollar has been left vulnerable to swings in sentiment as trade war fears waxed and waned. On Tuesday though there was a major break, both the Chinese and US president gave off relatively positive vibes for ongoing trade developments. Stocks rose and sentiment-linked currencies followed. As the threat of a trade war diminished on Tuesday, the NZ Dollar finds itself facing Wednesday’s economic calendar schedule.

On April 11th, we will get two top-tier US economic events. The first one is March’s US CPI report. The headline inflation rate is expected to tick up to 2.4% y/y from 2.2% while the core measurement climbs to 2.1% from 1.8%. Then, we will get the FOMC meeting minutes from Fed’s March rate hike. Both may have an impact on the US Dollar depending on how they impact central bank policy expectations.

For the New Zealand Dollar, this is critical as currently, it is essentially tied with the greenback in terms of associated yield. The RBNZ has shown us that they are in no rush to raise rates which means that it won’t be long until the US Dollar has the advantage over its New Zealand counterpart in terms of yield. This could make the greenback more attractive and NZD may suffer as a result.

Still, the markets have shown us that they are more interested in returns outside of the world’s largest economy. With that in mind, keep an eye out for a speech from RBNZ’s Assistant Governor John McDermott. He is scheduled to talk about inflation targeting during the early hours of Thursday’s trading session. Given the recent regime change from the central bank, perhaps he may offer a clue as to what is to come. We haven’t had a major announcement from them since March’s monetary policy announcement.

On a daily chart, the New Zealand Dollar has pushed above a falling wedge bullish reversal pattern. This suggests that prices may keep pushing higher in the near-term. If they do, NZD/USD may soon find itself once again testing the September 2017 horizontal resistance line around 0.7436. But to get there, it faces a couple of obstacles.

Standing in the way as immediate resistance is the 38.2% Fibonacci extension at 0.7404. A push above that exposes the “day range high” at 0.7416 which was derived using the table above. Statistically speaking, there is a 68% chance that prices may remain within this boundary over the next 24 hours. After that, NZD/USD faces the 2017 line. 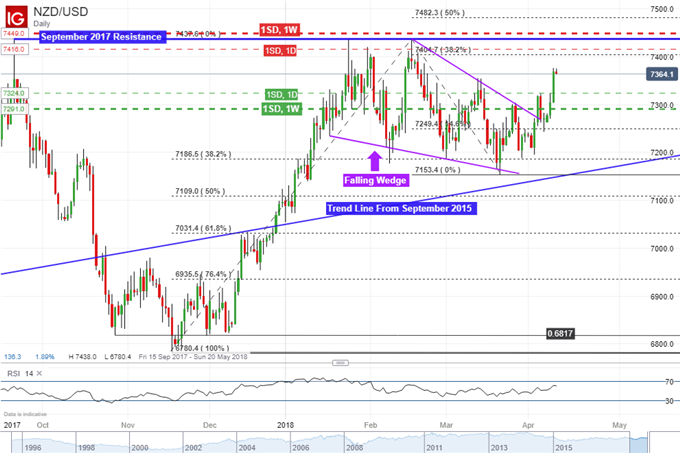