See how Australian Dollar sentiment is viewed by the trading community!

Since the beginning of February, the sentiment-linked Australian Dollar has been a rather active currency. First, it was negatively impacted by a strong US jobs report that showed wage growth unexpectedly jumped to 2.9 percent. Then, it was hurt by a stock meltdown on higher US inflation fears. Since then, the currency has been regaining lost ground against its major peers as Wall Street rebounded and volatility cooled.

However, things may be heating up again for AUD/USD in the near-term. Looking at the chart above, 1-day (1D) and 1-week (1W) implied volatility for the pair show the highest readings across the FX majors spectrum. The 1W reading is tied with NZD/USD at 10.20%, and the 1D level is at 15.64%. An incoming jobs report on Thursday might help explain this.

Australia is expected to add 15k employed positions in January. This would be a downtick from the 34.7k net gain in December. All the while, the unemployment rate is estimated to stay the same at 5.5% as labor force participation shrinks to 65.6%.

Data out of the country has been underperforming relative to economists’ expectations since mid-January. This opens the door for a nasty surprise in the jobs data. With that in mind, even if there is a worse-than-expected net change in employment, the Australian Dollar could still appreciate. This might be the case if the country adds more full-time jobs while simultaneously shedding more part-time employees. Such was the case back in November 2017.

Still, the RBA has hinted in its February monetary policy statement that it is in no rush to raise rates. This could also mean that Aussie Dollar might return to tracking equities shortly after the jobs report. With that in mind, the priced in probability of volatility for this currency pair seems well founded.

On a daily chart, AUD/USD has put in a momentary recovery after declining since January 29th to the lowest point of this year so far. The turn lower was accompanied by a break below a near-term rising trend line from early December (thinner blue line on chart below). This occurred as negative RSI divergence built up. Now, let’s see where the boundaries of the ranges calculated above will take us.

If AUD/USD continues climbing, the “day range high” at 0.7983 might end up as near-term resistance. This is because this price almost perfectly lines up with the 23.6% Fibonacci level. A push above that will expose the “week range high” at 0.8030 which is just below the 14.6% minor Fib at 0.8043.

Should Aussie Dollar come crashing back down again, the “day range low” at 0.7853 might stand in the way as immediate support. A close below that price leaves a 68% probability that AUD/USD remains within the “week range low” of 0.7806 over the next five trading days. 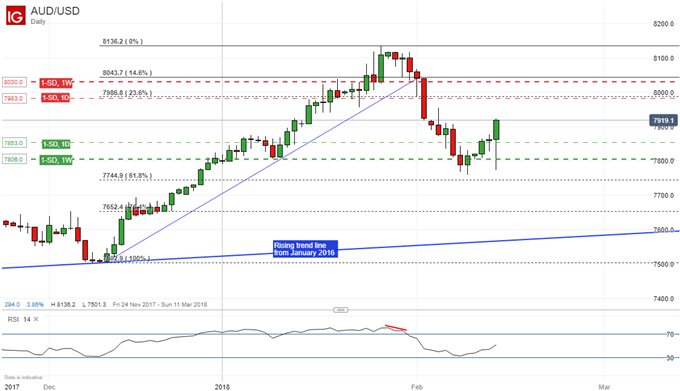 On a weekly chart, AUD/USD appears to be taking a break following the formation of a Bearish Engulfingcandlestick pattern. With Friday’s close still being a couple of days away, it remains to be seen whether this week’s recovery might negate last week’s continuation. 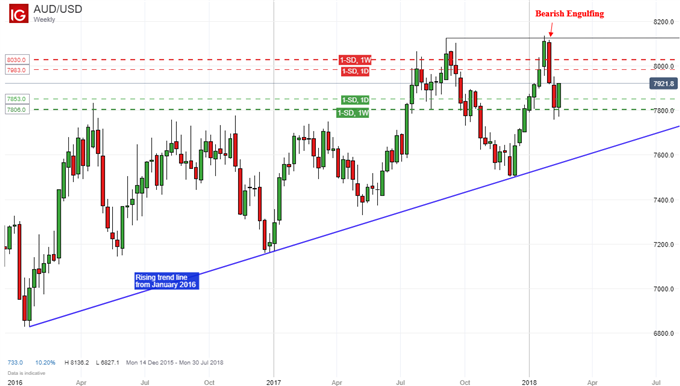