- Progress on tax reform legislation is the number one influence on the US Dollar through the end of the year, given the broader implications for deficit spending and inflation.

- The Federal Reserve can only be a negative influence on the US Dollar for the rest of 2017, given that a rate hike is fully priced-in for December.

- While low inflation may be giving the Fed reason to pause, the combination of low inflation and strong earnings growth has made US equities more appealing in recent weeks and months – a trend that should continue.

With only five full weeks left in the year, 2017 is nearly a relic of the past. The US Dollar will probably be thankful for the calendar to turn; it has been a disappointing year to say the least. After hitting its high on the first trading day of 2017, the DXY Index hit a yearly low on September 8 and has only rebounded marginally since then.

On the other hand, 2017 has been another great year for bonds and stocks: US Treasury yields at the long-end of the curve continue to fall, even as US equity markets pushed relentlessly higher. In fact, during the week of Thanksgiving in the United States, all three major US equity markets hit new intraday all-time highs.

These trading conditions that have been the hallmark of not only the first two months of the fourth quarter but 2017 in general appear to be destined to continue through the end of the year. As such, we’re watching three major themes as the next five weeks wind down into 2018:

1. The Disagreement Between the Fed and the Market Over the Path of Rate Hikes

The biggest threat to the US Dollar through the end of the year, and well into 2018, is the prospect that the Federal Reserve is wrong. Since December 2016, the FOMC has been projecting three rate hikes during the next calendar year. However, market participants disagree: only one 25-bps hike is being priced-in, currently for June 2018.

This dissonance between the Fed’s point of view and the market’s perception of Fed policy is the most considerable source of concern for the greenback. As we saw after the Fed kicked off the rate hike cycle in December 2015, the frequent habit of reducing the projected path of future interest rate hikes (the “glide path”) proved to undermine the US Dollar for nearly all of 2016. 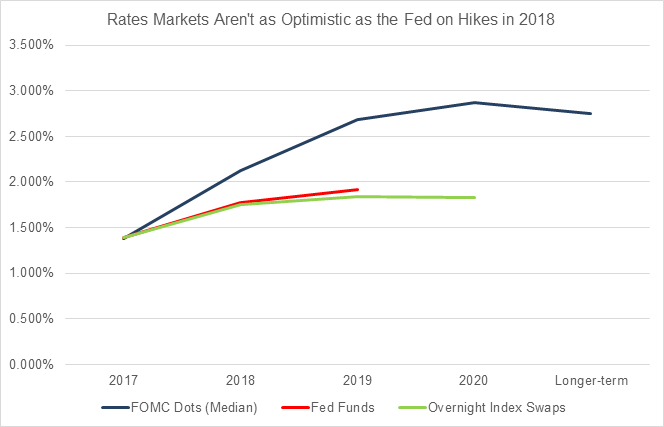 Now that inflation has seemingly started to peak again – disinflation is afoot in the September and October prints – it seems that the Fed poses asymmetric risk to the US Dollar. If they hike rates in December and outline three hikes for 2018, it will already be priced-in (100% chance of a 25-bps rate hike next month, per Fed funds futures contracts) and unconvincing to a market that has thus far been unwilling to acquiesce. But if the Fed doesn’t stick to its plan, even deviating slightly – say, only two hikes next year – it could be a quick trip lower for the US Dollar.

Stable, low inflation is an outcome that corporations can live with – and flourish under. Yes, costs are indeed rising. But they are rising at a predictable, manageable rate. Costs can be projected with confidence, meaning capital can be deployed into projects that generate revenue and earnings growth.

Something similar can be said about bonds. If inflation expectations are rapidly increasing, you would expect to see fixed income underperform: why would you want to have a fixed return when prices are increasing? On a real basis, your returns would be lower than otherwise intended. 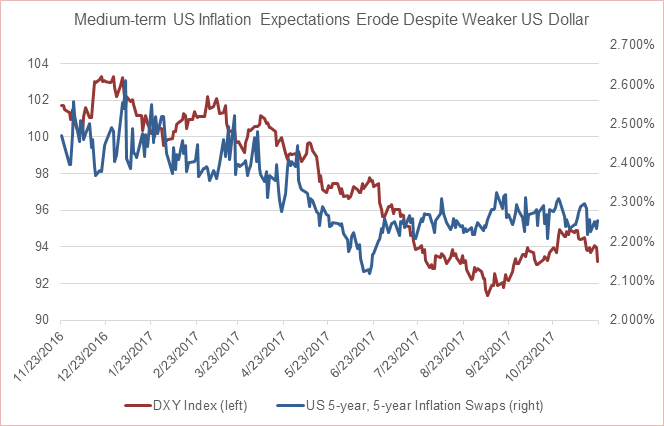 The backdrop of low inflation is exactly where US bonds and stocks find themselves positioned right now. Throw in the fact that global growth is performing stronger, with North America, Europe, and Asia growing in concert, and the fact that corporate earnings growth has stayed strong for almost a year now, and you have a mix of factors that means stocks can keep climbing (pencil in that Santa Claus rally) and bond yields can stay low (barring unforeseen event risk, of course).

3. Tax Reform Should be a Positive, but It Doesn’t Feel That Way

Since 1965, there have only been 18 years in which one party has controlled both Congress and the White House. Regardless of ideology, whichever singular party has tended to be in control after a wave election has pursued fiscal easing strategies: the US budget deficit grew by an average of 0.4% of GDP during those 18 years. Historically, it's been observed that when the US government runs larger deficits, inflation tends to increase.

Enter the current tax reform plan: it is expected to grow the deficit by $1.5 trillion over the next decade. Accordingly, the implication is that passage of tax reform legislation will lead to a rise in expected as well as realized inflation, forcing the Fed into a more hawkish monetary stance (i.e. keeping up the three hike per year pace of rate increases), and ultimately, forcing the market to believe the Fed (Fed has said three hikes are coming in 2018; market is only pricing in one for June 2018).

The simple reality is that the tax reform bill should be a boon for corporate earnings - which are already moving in the right direction - but not necessarily for jobs growth explicitly. In general, most of the funds repatriated or earned via higher revenue (thanks to lower taxes) will be given back to shareholders via dividends or share buybacks; raises for workers (wage growth), hiring (jobs growth), or jobs training (productivity increases) are not top priorities for most US corporations. Without the prospect for wage growth, the follow-through impact on inflation expectations will be limited and thus the appetite for US Dollar longs diminished.