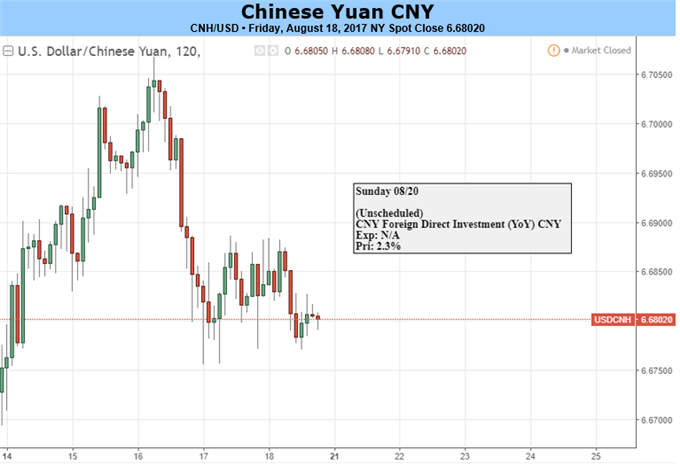 The Chinese Yuan lost against the U.S. Dollar this week, following five consecutive gains. The USD/CNH remained the bearish trend (bullish for the Yuan) amid the Dollar weakness and was testing the top 50% line of a parallel. Next week, China’s economic calendar is light; the primary external risk will come from the Jackson Hole Economic Symposium. In terms of risks from home, policies from China’s central bank as well as the development of China’s relationship with its counterparts will be top drivers for Yuan pairs.

In the onshore Chinese market, speculation on the PBOC to cut the reserve requirement ratio (RRR) has risen over the past week due to the severe liquidity shortage. Despite that the central bank injected 110 billion Yuan through open market operations and added 399.5 billion Yuan through Medium-term Lending Facility this week, banks and non-bank financial institutions found it quite challenging to meet their liquidity need; interbank borrowing rates, such as SHIBOR and pledged repo rates, were all soaring.

Yet, the temporary liquidity shortage is less likely to lead to a major change in the policymaker’s prudent monetary policy, as long as the risks of high leverage and price bubbles are not fully eased. Only, there will be a cost of curbing these risks - the economic growth could slow down: when companies cannot borrow from banks which are often lack of cash themselves, investment in expanding existing business or initiating new business will drop. For instance, the growth rates for total investment fixed assets and private investment in fixed assets fell to 8.3% and 6.9% respectively in July.

The dilemma between domestic growth and risks is not the only issue that China faces; unstable global environment and hostile tones from counterparties add more challenges for the country. After spending efforts to ease tensions between the U.S. and North Korea, China took the hit directly this week: the U.S. launched a trade investigation on China, which viewed by White House adviser Steve Bannon as an “economic war”. The investigation may not see any immediate result on existing trade deals, but it could make both the U.S. and Chinese exporters and importers worried, and dampen the outlook of the trade between the two countries.

In addition to the internal and external pressures, Chinese regulators can impact the Yuan in other different ways. The PBOC may continue to use the reference rate to guide short-term Yuan moves. This week, the regulator has lowered the Yuan fix from an 11-month high level. Also, the FX regulator has strengthened oversight on capital flows to crack down illegal fund transfers. The Chair of SAFE, Pan Gongsheng, said on the past Thursday that the regulator will curb the risk of cross-border capital flows and maintain the stability of the FX market.