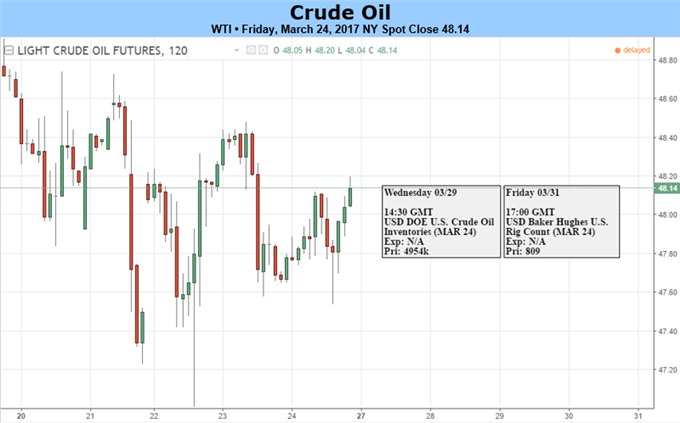 Here is one way to get a sense of the oversupply in the market due to US Oversupply. Look to see how much Gulf Tanker rates are rising. Gulf Tanker rates can show you how much money is being requested from Tanker’s in the Gulf Coast to store Oil, which is presumably being used as storage space on lands reaches capacity. 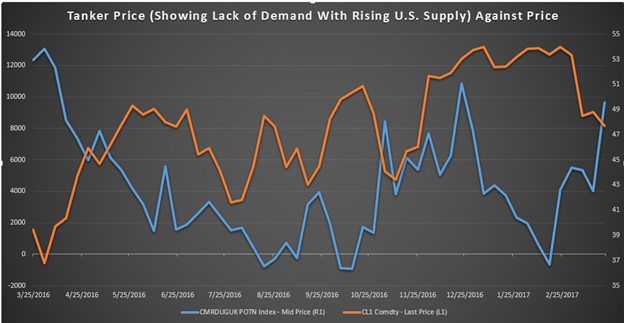 The chart above aligns with a familiar story, which is the oversupply in the US from shale producers are threatening the price recovery in Oil. The chart shows the price of Tanker rates rising sharply as Oil price topped out and began its ~12% decline. In May, OPEC is expected to make a decision as to whether or not the cuts will be extended. It will be important to watch how they will act given that the US Shale Producers have a hand in unbalancing the market that OPEC is actively trying to fix.

On Friday, we got word from Baker Hughes International that the U.S. Oil Rig Count Report had risen 21 rigs to 652 active rigs. This number is over double the number of active rigs from last summer at around 330. As you would expect, the majority of rigs being reinitiated are in the cheaper to produce shale regions.

Technical View: The price action of Crude Oil is continuing to trade below the all-important 200-DMA at $48.62. Over the last year, recent price tests of the 200-DMA have been met with large buying volume that subsequently lifted prices to multi-month highs over the following months. 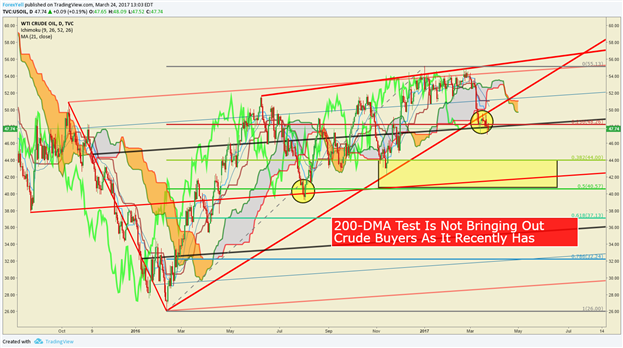 The focal points for the energy market next week will remain Wednesday’s EIA Petroleum Supply Report at 10:30 AM ET and Friday’s Baker-Hughes Rig Count at 1:00 PM ET followed by the 3:30 PM ET release of the CFTC Commitment of Traders report. This weekend, Kuwait will host OPEC leaders to discuss the progress of the production cuts on balancing the markets. One optimistic view from Energy Aspects, Chief Oil Analyst Amrita Sen is that "OPEC pushed an extra 1.5 million barrels a day of exports and production really late into last year, that’s the effect we’re seeing now. You're going to start seeing the effects of the cuts pretty much from next week onwards." 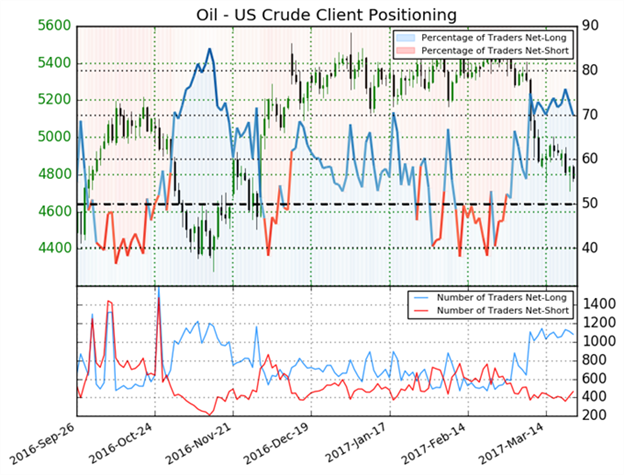 We typically take a contrarian view to crowd sentiment, and the fact traders are net-long suggests Oil - US Crude prices may continue to fall. Traders are less net-long than yesterday and compared with last week. Recent changes in sentiment warn that the current Oil - US Crude price trend may soon reverse higher despite the fact traders remain net-long. (Emphasis Mine)