Yuan at a Crossroads, Risk Trends Next? 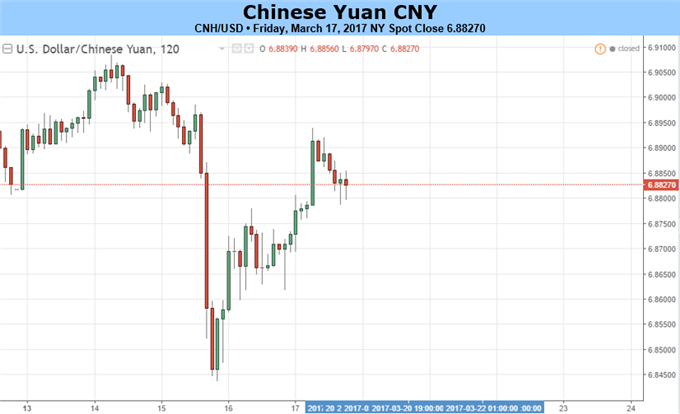 The USD/CNH failed to hold a sustainable break below 6.8560 (December low), nor to climb above 6.9088 (61.8% retracement of the January drop). Looking forward, the economic calendar is light. This may give markets some time to react to moves in the past week: following a highly anticipated rate hike and a more dovish plan than expected for the future, the U.S. Dollar sank against its counterparts including the Yuan. There are still some event risks next week: The G-20 ministers meetings on March 17 to 18 may add volatility to the open of the week. On Thursday, Fed’s Chairwoman Yellen will give a speech at Community Development Conference. On China’s side, PBOC’s policies are back to spot light, as the regulator may introduce detailed measures after the annual National People’s Congress (NPC) meetings.

The surprising weakness in the Dollar following Fed’s rate decision is likely led by the fact that the Fed did not raise the long-term target rate, while markets have priced-in three rate hikes this year. Without a new stimulus, the strength in the Dollar faded after Fed’s announcement. However, a bearish setup for the USD/CNH (bullish for the Yuan) will need further validation. The pair touched below a long-term trend line but failed to set a lower low this week. Also, the offshore pair remains below the PBOC’s guided level, meaning the Chinese regulator seeing a weaker Yuan. A bullish setup will need additional evidence as well. The pair hit 6.9088 this past week but did not break the key level. The U.S. Secretary of Treasury Mnuchin is attending the G20 ministers meetings; his comments on the outlook of trade deals with China (if any) could highly impact Dollar/Yuan rates.

In China, curbing financial risks, especially the risk of price bubbles, become the PBOC’s main focus after NPC. This may not add much direct volatility to the Yuan but will weigh a lot on China’s monetary policy: when the economic growth slows down, more dovish policy is normally preferable as it will better support the economy. However, rising prices in property, commodities and other financial products have become major obstacles for China to introduce easing measures. On March 17th, the PBOC issued a joint announcement with other regulators to further tighten regulations on home purchases: The down payment for buying a home in Beijing, the capital city where soaring prices were seen frequently, has been lifted to 60% for either a second-home purchaser or a purchaser who has already applied for mortgage before. This means that despite home loans dropped in February, regulators still see significant risk of housing price bubble. Before this concern is fully eased, China’s monetary policy will most likely stay neutral.