The ongoing depreciation in the USD/JPY exchange rate may continue to fuel speculation for a currency-intervention, but the Federal Open Market Committee (FOMC) and the Bank of Japan (BoJ) may have little choice but to endorse a wait-and-see approach over the coming months amid the growing uncertainties surrounding the world economy.

Beyond Japan’s House of Councillors’ election in July, the disintegration in Europe may have a larger impact on the currency market and spur a material shift in trader sentiment as the rising threat for contagion drags on risk appetite. With Japan moving back to its historic role as a net-lender to the rest of the world, the improvement in the Balance of Payments (BoP) may spur greater demand for the Yen as the outlook for the global economy becomes increasing clouded with uncertainty. That being said, Japanese officials may find it increasingly difficult to talk-down the local currency as carry-trade interest deteriorates, and efforts to jawbone the Yen may fail to bear fruit especially as the BoJ continues to monitor the impact of the negative interest-rate policy (NIRP). Even though the central bank remains under pressure to further support the real economy, Governor Haruhiko Kuroda may preserve the current policy over the coming months as Prime Minister Shinzo Abe delays the sales-tax hike and pledges to take ‘bold’ measures to encourage a stronger recovery.

At the same time, the Federal Reserve may stick to the sidelines and further delay its normalization cycle as the central bank remains concerned about the low-inflationary environment accompanied by the external risks surrounding the real economy. Even though the U.S. approaches ‘full-employment,’ the FOMC may look to buy more time as ‘the Committee expects that economic conditions will evolve in a manner that will warrant only gradual increases in the federal funds rate,’ and Fed Chair Janet Yellen may sounds increasingly dovish over the coming months as market-based measures of inflation compensation remain weak while ‘survey-based measures of longer-term inflation expectations are little changed.’ With the Fed in no rush to implement higher borrowing-costs, waning interest-rate expectations may ultimately spur USD weakness over the near to medium-term as market participants adjust their outlook for monetary policy.

As a result, the dollar-yen may depreciate further over the coming months as market participants push out bets for the next Fed rate-hike, while efforts by Japanese officials to weaken the local currency may fail to have the intended impact as carry-trade interest falters.

The Japanese Yen’s ‘funding-currency’ status may continue to play a key role in dictating price ahead of the key interest rate decisions as USD/JPY broadly moves in tandem with the global benchmark equity indices.

Indeed, efforts by the community of global central bankers to avert a further slowdown in the world economy may prop up market sentiment, but fear of a ‘hard-landing’ in China paired with the weakened outlook for Emerging Markets may continue to sap investor confidence and spark a further unwinding of the ‘carry trade.’ In turn, shifts in risk trends may largely accompany turns in USD/JPY as market participants weigh the outlook for monetary policy. 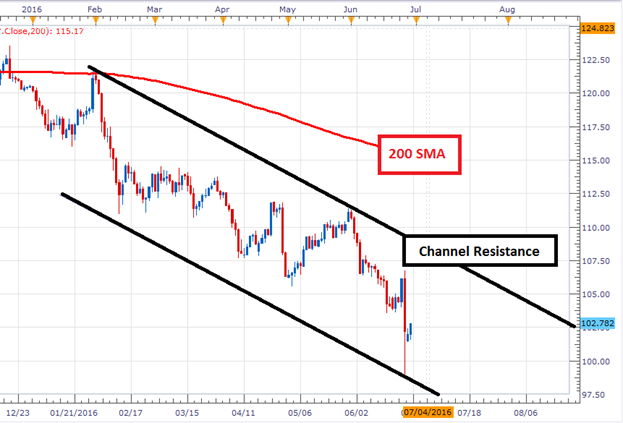 The technical outlook for the USD/JPY continues to be bearish, as the pair continues to trade below its 200 day SMA (Simple Moving Average). To date the pair has declined as much as 2489 pips for the 2016 trading year. Currently, the 200 day SMA resides at 115.27. As long as the USD/JPY trades below this value, its ongoing trend should be considered bearish.

The USD/JPY may be attempting to put in a new swing low, from the June 2016 low at 98.78. If prices continue to rise from this point, it may suggest that the USD/JPY is trading in an ongoing descending price channel. Resistance for this channel has been formed by connecting a series of highs, which include the February 2016 high at 121.68 and the June 2016 high at 111.44. If prices test this channel, traders should look for the USD/JPY to potentially turn back in the direction of its primary trend. Alternatively, if the USD/JPY ascends above this point of resistance, it opens the pair up for a further rally. In this scenario, traders should watch for prices to challenge the previously mentioned swing high at 111.44.

The 2016 low at 98.78 should remain in focus for a bearish continuation for the USD/JPY. First, if prices trade below this value that means that the USD/JPY will again be trading below the psychological 100.00 level. This value has historically been used as a point of support, and a decline below it will make 100.00 acting resistance in an ongoing downtrend. In this bearish scenario, traders should watch for the USD/JPY to not only test the

Trading foreign exchange on margin carries a high level of risk, and may not be suitable for all investors. The high degree of leverage can work against you as well as for you. Before deciding to trade foreign exchange you should carefully consider your investment objectives, level of experience, and risk appetite. The possibility exists that you could sustain losses in excess of your initialinvestment. You should be aware of all the risks associated with foreign exchange trading, and seek advice from an independent financial advisor if you have any doubts.