Data provided by
News
Euro Caught in the Range as US Dollar Sidelined Ahead of CPI. Will EUR/USD Breakout?
Swiss Franc Firming Against US Dollar and Euro. Will Momentum Take CHF Higher?
Oil - US Crude
Bullish
Low
High
of clients are net long.
of clients are net short.
Long Short

Data provided by
News
Euro Caught in the Range as US Dollar Sidelined Ahead of CPI. Will EUR/USD Breakout?
Crude Oil Prices Fall as Market Backwardation Weakens Ahead of OPEC Report, EIA Data
Wall Street
Bullish
Low
High
of clients are net long.
of clients are net short.
Long Short

Data provided by
News
Euro Caught in the Range as US Dollar Sidelined Ahead of CPI. Will EUR/USD Breakout?
Gold Price to Track 50-Day SMA on Failure to Clear August Opening Range
GBP/USD
Mixed
Low
High
of clients are net long.
of clients are net short.
Long Short

As I wrote in my guide on trading geopolitical risks, when macroeconomic fundamentals erode, the magnitude of a political shock is amplified. With the war in Ukraine and rising tension between China and the US amid the former’s regional-fortification strategy, financial markets are likely to become more sensitive. This seems especially so for growth-linked commodities like crude oil.

XI JINPING SPEECH - WHY IT MATTERS

Xi Jinping has consolidated power on a scale not seen since the ascent of Mao Zedong, the founder of the Chinese Communist Party (CCP). The current Chinese President’s approach to policy - both foreign and domestic - has become more nationalistic and bold, bordering on belligerent. Consequently, speeches at historically-heavy events frequently hold key insights.

For example, in his opening comments at this year’s BRICS summit, Xi indirectly accused the US of “weaponizing” the world economy to advance its own agenda. He was alluding to the sanctions levied by the US and the West against Russia in response to the Moscow’s “special military operation” in Ukraine.

This week, Xi will likely reappear on July 1 and give a speech in Hong Kong, commemorating 25 years since the UK returned it to China. The aggressive reintegration of the Special Administrative Region (SAR) – like the introduction of a controversial new national security law – has triggered international scrutiny, domestic unrest, and led to businesses fleeing amid uncertainty.

How the PRC President uses this opportunity to talk about Chinese sovereignty and the national agenda as a whole could put regional assets on the defensive. A more aggressive reinforcement of recent themes and an underlying message promoting the reunification of ‘Greater China’ – including Taiwan - could send a chill down investors’ and policymakers’ spines.

This week, NATO leaders will be convening in Madrid amid war in Ukraine. However, this meeting is unique in that for the first time, it will set out the military alliance’s joint positions with an address specifically on China. The rest of the meeting will be dedicated to agreeing to a “2022 Strategic Concept”.

An unnamed official emphasized that “...Ukraine is not causing us to take our eye off the ball on China. In fact, quite the opposite”. Part of the discussions will also include offering an alternative infrastructure program to counter China’s massive Belt and Road Initiative (BRI) which has over 70% of countries in the world signed on to it.

China has been said to have taken on a “Wolf Warrior” approach to policy - characterized by greater assertiveness and aggression. This combined with its rising economic strength has prompted Western allies to seek countermeasures. Beijing will likely respond and take further steps to entrench itself internationally. For investors, this that worries about instability and disruption in cross-border capital flows will likely calcify.

“Damned if you do, damned if you don’t” is a sentiment that is likely felt by Federal Reserve Chairman Jerome Powell. What was characterized as “transitory” for months has shown to be anything but. Inflation continues to hover at multi-decade highs with monetary authorities playing catch-up by implementing gargantuan rate hikes of 75 basis points at a clip.

Interest rate futures suggest traders are anticipating for the Fed to raise rates again in July, but the prospect of another 75bps rise is still not fully priced in. Investors may be setting themselves up for a negative surprise, potentially causing a big market uproar if Mr. Powell and the committee tighten rates by more than 50 basis points.

The negative shock to sentiment will not only bring equities and cycle-sensitive currencies like the Australian and New Zealand Dollars down, but crude oil as well. The black commodity has enjoyed a rosy ride on the back of pent-up demand and supply chain bottlenecks from COVID-19 that were subsequently amplified by the war in Ukraine.

However, as central banks all over the world continue to raise rates to fight price growth, the prospect of an economic downturn increases. The need for critical energy inputs - like crude oil - may subsequently lighten, thereby putting Brent on the defensive. As the tsunami of recessionary fears mounts, traders may pump oil out of their portfolio in anticipation of a pullback in demand. 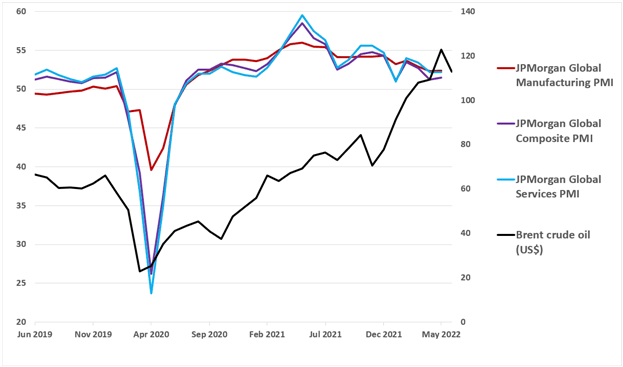 Crude oil prices recently broke below support at 114.79, shortly after traders threw in the proverbial towel when Brent was unable to shatter resistance at 123.71. The disappointment from several attempts resulted in a capitulation that led to an over-10 percent decline. However, the pain may just be starting. 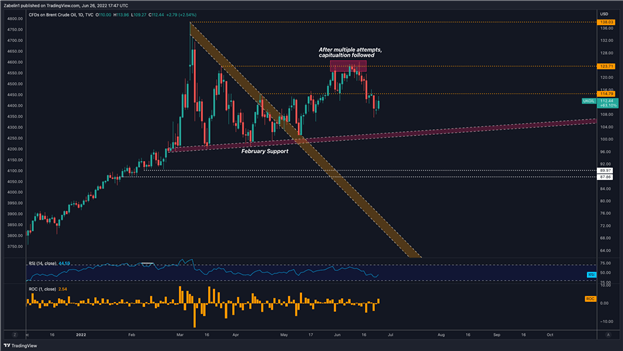 Crude oil prices may attempt to retest former support-turned-resistance at 114.79, though failure to clear it could further dampen sentiment. The next critical level will be the February rising support channel that has buttressed Brent since the floor was laid. What happens if traders rip up the floorboards?

If crude oil also pierces this key level, it could imply a far more bearish outlook. Consequently, traders may then quickly attempt to offload oil to mitigate losses as other investors do the same. The confluence of macroeconomic and technical elements could create a bearish cocktail that traders may not yet be ready to swallow. Brent may have a bitter end.