Are Capital Markets Ready To Come off A Cocaine High?

In 2016, former Fed President Dick Fisher stated on a CNBC interview that the Fed through QE basically, "we injected cocaine and heroin into the system, and now we're maintaining (the market) with ritalin." He also notes that predicted at the time and shared with his collegues to expect a 20-30% correction on a return to a liquidity norm in the market, which is appear to be just beginning.

The Liquidity Vacuum Is Beginning, And Markets Aren't Happy 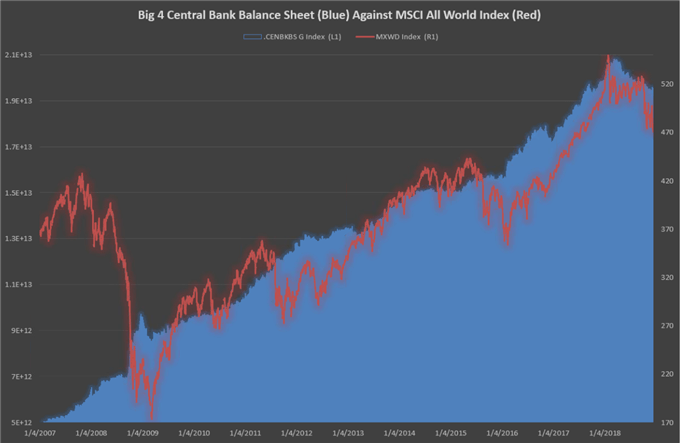 The central bank’s balance sheet has increased exponentially since 2008. As the chart illustrates, there was a 200% growth. This can be due partly by the Fed’s economic stimulation when it injected funds to increase asset prices. Therefore, the Fed’s actions had a positive effect in the past. What is worrisome is that the market is once again experiencing a decrease only this time, the central bank is reducing their assets on their balance sheet.

In 2008 when the market experienced a crash, it gradually recovered after the central bank increased their assets, which helped the overall economy. The market is now experiencing a decline once again only this time the central bank is reducing their assets. The balance sheet has experienced a decrease in assets by 6% so far. This has a negative effect on the equity market where it decreased by 14%.

The central banks are there to help the overall economy. For instance, when the economy is strong, they look at tightening monetary policies (i.e., selling assets). If they want to stimulate growth, then the opposite is done through expansionary policies (i.e., buying assets). By doing this, they are injecting confidence in the market and trying to avoid an economic crisis. The recent decrease in assets indicates that the Fed has taken a step back from adding liquidity, letting the market play out on its own resulting in the market potentially decreasing further. 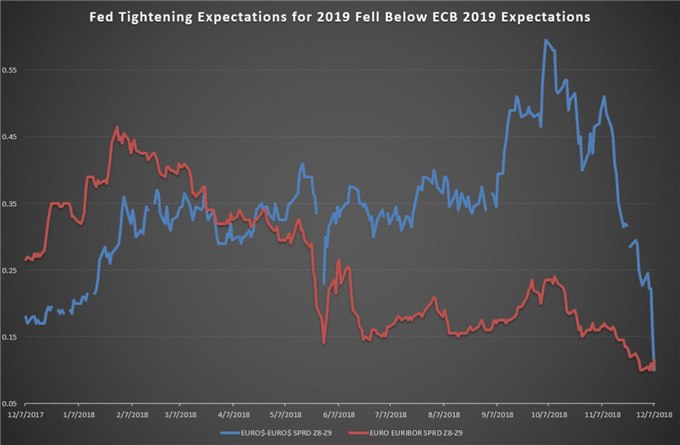 Wednesday’s meeting will determine whether the Fed will hike rates based on the economic projections.

The Fed's decision has an impact on the European economy. The ECB’s end of quantitative easing and the decrease in balance sheet assets signals that the economy is in a good position. However, the low inflation and the decrease in global trades does not support this. Therefore, if there is a hike, it will have a negative effect on the Euro resulting in depreciation against the USD.

The graph above illustrates that the dollar is near a year to date high and there seems to be an uptrend, which indicates a further increase in price.

The dollar is currently strong, and with Wednesday’s ECB meeting approaching, the dollar may go even higher depending on their decision. If the ECB decides that they will increase rates, then we can expect the dollar to appreciate against the Euro.

The USD and commodity prices are inversely related. If the USD further appreciates, this will decrease commodity prices. In addition, this may decrease exports and increase imports as the currency will be more expensive. This, in turn, will lead to an increase in U.S trade deficit.

Sr. Analyst, Tyler Yell, CMT covers this indicator and more in the DailyFX podcast; Trading Global Markets Decoded that you can access here.