Join me on Monday, July 19 for the next FX Week Ahead session
Cross-Market Weekly Outlook
Register for Webinar
Join Now
Webinar Has Ended

While hot inflation readings should theoretically spill into higher US Treasury yields, the fact that the Federal Reserve continues to resolutely insist that inflation is “largely transitory” may prevent significant topside move in yields. Accordingly, there is asymmetric risk for the US Dollar: a hot inflation report may not do anything to push yields higher; a softer inflation reading could justify another leg lower in yields.

The interim period since the May RBNZ policy meeting has produced several strong economic data reports, and when viewed in context of the shift in the RBNZ’s remit (to include house prices), it appears that the ‘steady as she goes’ attitude that emerged from the prior meeting will be more aggressive this time around. Even though the July meeting will not see any new forecasts from the RBNZ, a simple acknowledgement that the New Zealand economy has progressed far enough to warrant discussions around a rate hike could be enough for markets to keep the Kiwi bid. 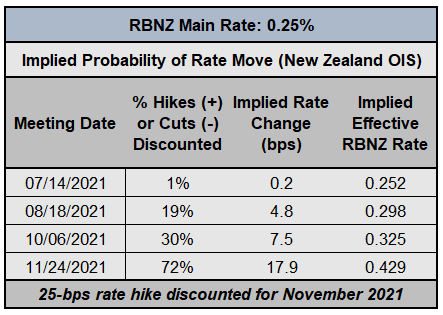 While it’s was noted in May that the “RBNZ may make overtures to signal removal of stimulus plans eventually, but not vis-à-vis the interest rate channel in the near-future,” this is no longer the case. Whereas two months ago there was roughly a 30% chance of a 25-bps rate hike by the end of the year, New Zealand overnight index swaps are now pricing in a 72% chance of such an event.

It’s important to note that Andy Haldane is now the former Chief Economist of the Bank of England. What makes this noteworthy is that he was the most hawkish voice among the policymakers on Threadneedle Street. Even though asset purchases are being tapered, the removal of Haldane’s voice from the conversation may make the BOE’s Monetary Policy Committee less sensitive to elevated inflation readings.

The first inflation report in the post-Haldane era is due out this week. According to a Bloomberg News survey, the headline JuneUK inflation rate is due in at +0.2% from +0.6% (m/m) and +2.2% from +2.1% (y/y), with the core inflation rate (ex energy and food) due in unchanged at +2% (y/y). Seeing as how upside price pressures are due to fade, the June UK inflation report may not prove to be helpful to the British Pound.

A strong labor market and persistent inflation readings above the BOC’s mandate – as well as the fact that the BOC projects inflation above its mandate for the next several years – has increased the odds that the next step of stimulus withdrawal takes place at the July BOC policy meeting. It should not come as a surprise if the BOC announces a taper to its QE program of C$1 billion, bringing its asset purchases to C$2 billion per week. 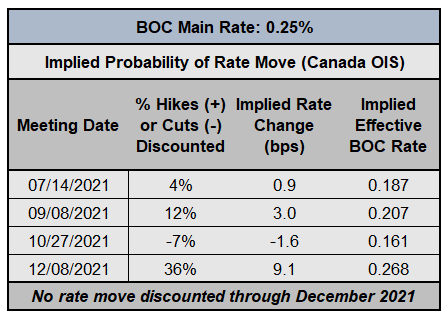 In line with previous efforts, the BOC has made clear it is content with its decision to taper, but it remains the case that further action along the interest rate channel remains highly unlikely. According to Canada overnight index swaps, there is a 4% chance of a 25-bps rate hike at the July meeting, and those odds only rise to a meager 36% by year end.

Australia’s labor market is improving in fits and starts, without much consistency in recent months. According to a Bloomberg News survey, the Australian economy added +30K jobs in June, a significant downshift from the +115.2K jobs added in May. The unemployment rate is expected to drop slightly from 5.1% to 5.0%. But with lockdowns descending upon Australia anew, it may be the case that a strong labor market report is overlooked as the expectation would be for weaker jobs data to arrive in the coming months; a good labor report may be duly dismissed.