Since the last Reserve Bank of Australia rate decision on May 7, economic data trends have proved disappointing. The Citi Economic Surprise Index for Australia, a gauge of economic data momentum, fell from 43.9 on May 7 to 26.9 on May 31. While there was neither a GDP nor an inflation report released, the data that did come out proved middling at best. March Australia retail sales grew by 0.3% after adding 0.9% in February (m/m), while the April Australia jobs report showed a strong topline figure that was undercut by a surprise rise in the unemployment rate.

Given that market pricing is very tight as is –there is a 70% chance of a second 25-bps rate cut by September (overall, a 79% chance of two cuts in 2019) – it will take a lot for the RBA to not disappoint steep dovish expectations. When a policy decision is priced-in this far in advance, it shouldn’t be a surprise if the corresponding currency (in this case, the Australian Dollar) doesn’t respond with a significant price reaction. 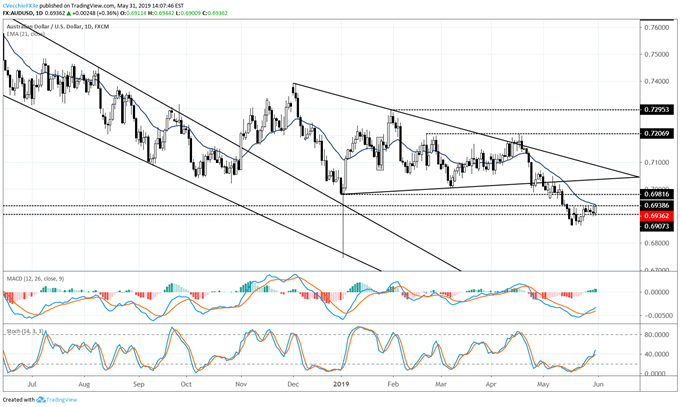 A technical analysis overview of AUDUSD prices showcases a currency pair that may be attempting to bottom. Price is currently enmeshed in the daily 8-, 13-, and 21-EMA envelope; AUDUSD has closed below the daily 21-EMA since April 22. But with the daily 21-EMA being tested for the first time in five-weeks, there is tangible technical evidence that a turn may be in the midst of its early stages (helped by broad US Dollar weakness).

A move back above the daily 21-EMA at 0.6944 would increase the likelihood of a return back to the former 2019 closing low established in January at 0.6982. Otherwise, if AUDUSD were to fall below 0.6899 (the low during the last week of May), then traders may want to rethink the perspective that prices are bottoming out. 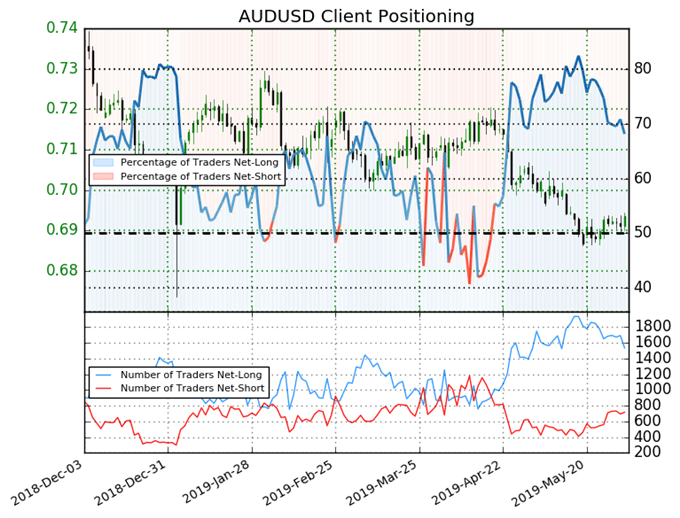