Beware the Ides of March; Dow Jones at Risk of Topping

Dow Jones Industrial Average finished strong on Friday closing near its highs at 17,213. We believe the move higher is pressing into technical resistance that opens the door to a meaningful sell off.

Since February 25, the case was made for a buy the dip strategy while targeting 17,000-17,350. Friday’s move is deep enough into the target zone that we’ll “call in the dogs” and see if a turn down develops.

This target zone was identified using the equal wave pattern. A common technical pattern is when alternating waves are equal in length. Red wave (c) is equal to red wave (a) near 17,231 which is really close to Friday’s price action. Therefore, we are on alert that the trend is mature to the upside. 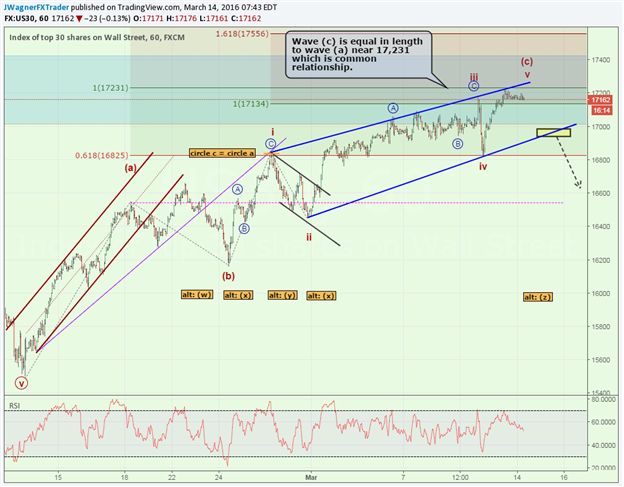 Shorter term the US30, a CFD which tracks the Dow Jones Industrial Average, appears to be finalizing an ending diagonal pattern. This pattern does allow for one more pop higher. However, the risk to reward ratios are not great at these levels for longs to continue. Therefore, we’ll watch the ii-iv trend line and a break below will be symptomatic the near term top is in place.

The ii-iv trend line is just below 17,000. A break below here would allow a shorter term trader the opportunity to position for a sell off while targeting 16,200 and possibly 15,500.

Though the Ides of March occur on March 15, we are not insinuating the DJIA must reverse or that a reversal will take place on the 15th. Our analysis is driven by the patterns and the patterns are mature to the upside. Naturally, our analysis of the patterns could be incorrect in that the pattern we think we see, isn't playing out.

For those interested in trade, we’ve studied the behavior of traders and found this one little tweak on risk to reward ratios increased the pool of traders who were profitable from 17% to 53%. Learn more about that tweak in pages 7-9 of the Traits of Successful Traders Guide. Keep that tweak in mind as you assess the US30 (residents outside of the United States can trade this CFD through FXCM.)