Meshing the Fundamentals and Technicals to Trade the RBA Rate Decision 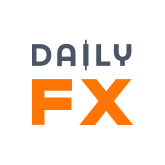 Meshing the Fundamentals and Technicals to Trade the RBA Rate Decision

By James B. Stanley

One of the more important drivers of currency prices, over the long-term, are interest rates.

This relationship between price and interest rates is compelling, as it goes so much deeper than just “XYZ economy has rates at 5, ZYX has rates at 2; so this is definitely going to happen.” Most of the time, the intermediate term oscillations that take place in currencies are around interest rate EXPECTATIONS.

If an inflation report comes out of Germany, that could potentially change the future rate picture of the entire ECB, and we could see the Euro getting price accordingly.

Last Thursday evening was a great example of this. Nothing itself changed with the Central Bank Rate set by the ECB last Thursday; that stayed at the same at 1.5%. No, what happened instead is that an inflation number – far beyond expectations – was released.

Inflation, in general, can be handled with Interest Rates. To stem inflation, or to temper inflation down, and economy can usually increase rates. However, the situation in the Euro-Zone, with 5 nation-states facing difficulty, 2 of which could conceivably default, one of which is fairly close (hinging on the hope of receiving its next ‘tranche,’ of bailout); is not exactly an environment in which this tool is available.

Raising rates in that economic situation could add kerosene to the fire that has become Greek Debt, and potentially Portugal as well.

To many traders, this is just emblematic of an even larg

er problem that could be looming. And that is the prospect of global recession, which – if happening, could entail losses in many economies outside of Europe.

Australia, for many intents and purposes, has been one of the more ‘bullish,’ markets over the past couple years. As prices for Gold and Silver surged, both of which key exports of Australia, the ‘Aussie,’ hit an all-time high against the US Dollar at the end of July at 1.1079. Australia, at the time, had one of the highest central bank rates of developed economies, with a rate set by the RBA at 4.75%.

Combine that with the fact that we’ve seen double-digit growth in China (until recently that is) and we can understand why the Australian Dollar had climbed to all-time highs.

But as fault lines appeared as risk sentiment has change; the Australian Dollar looks as though it is in a position to give up some of those gains with a potential reversal on the horizon.

The chart below can illustrate this picture for us: 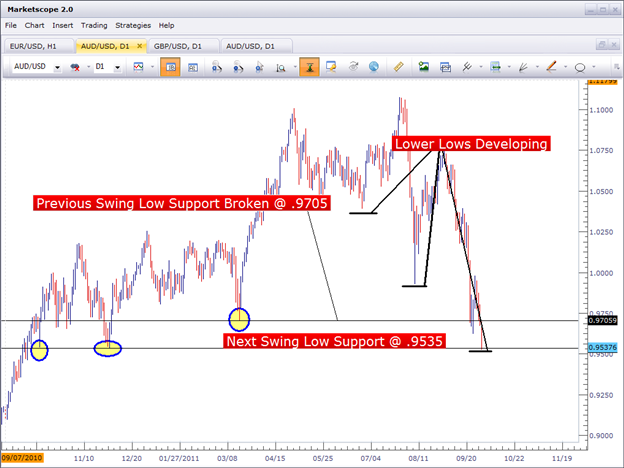 On the above Daily chart of AUD/USD, there are a few elements of interest.

First and foremost are the ‘lower-lows,’ that have been developing since the peak of the trend (on 7/27/2011). After Aussie hit this all-time high, the pair has been caught in a nasty downtrend that has dissipated almost 1500 pips of value. Notice that lower-highs are accompanying these lower lows, indicating we may have the formation of a new trend (to the downside).

Also of note, is that previous swing low support (at .9701) has been decisively broken. Notice that it took a few tests for this level to be broken, but price action brought on the early portion of trading on Monday drove the pair deeper.

So taking into account all these potential events, how can I look to play the Aussie?

Well, one thing should be clear before we get into an in-depth discussion. Despite all the writing that may appear to be on the wall, nobody knows what is going to happen from here. If it was a sure thing that the Aussie would be going down, price would already reflect that.

A major point of emphasis is that we don’t know what will be said at the RBA meeting tonight. Despite what we may see in economic indicators, or fundamental data – until an announcement is made, nobody knows what rate stance the RBA will take.

There is a good chance that no decision is made tonight, but the verbiage around the announcement could still be construed by traders for future rate movements.

So risk management is still an important element of this, or any trade, because nobody knows for certain what will happen next.

But considering that I only want to play Aussie to the downside (in current climate), I can take the recent break of support – looking to potentially take the pair further to the downside. 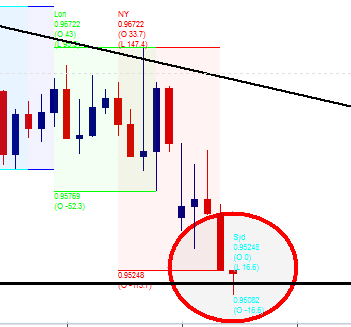 Trade management can be extremely important in this scenario, as these moves could potentially play out very quickly. If I’m able to get in the trade, and momentum is able to drive the pair lower – I will look to manage the trade by ‘locking up,’ additional profit as the position moves deeper in my favor.

The chart below illustrates the ‘trailing stop,’ mechanism that I teach in my webinars in the Live Classroom of DailyFX+.