- The impact of the US/China trade conflict on market sentiment has highlighted how FX rates and other asset prices can be moved by international trade news.

- For long-term traders, there are ways to take advantage and pitfalls to avoid.

The Impact of International Trade News on Forex

The current conflict between the US and China over international trade has serious consequences for foreign exchange rates and the prices of other assets such as stocks, bonds and precious metals. For long-term market investors and even day traders this opens up opportunities, so here’s a look at how to take advantage of them.

First, and most obviously, market sentiment can suffer when two major nations, such as the US and China, become embroiled in a trade war. Generally speaking, that can lead to a flow of money out of riskier assets such as stocks and commodities into those seen as safe havens, such as the Japanese Yen, the Swiss Franc, gold, US Treasuries and German Bunds.

Second, trade disputes can turn quickly into arguments about whether some countries are deliberately weakening their currencies to gain a competitive advantage; currenty a particular concern for Japan, which is seen as having a soft-Yen policy.

Here, the openness of individual countries to international trade is very important. Those that are most open have potentially the most to lose; those that are less open have less to lose. With that in mind, here is a ranking by the World Economic Forum of the top 10 economies best set up for trade. 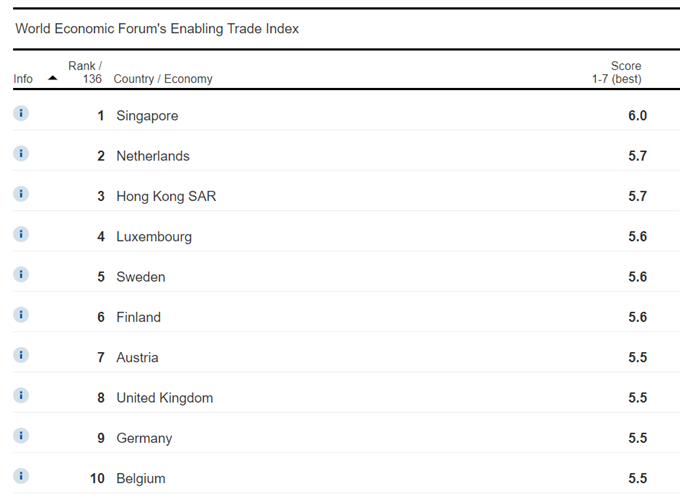 Note here that countries not among the top 10 include Japan at number 16, the US at 22 and China at 61. In theory, therefore, currencies such as the US Dollar and the Japanese Yen would be affected less by trade restrictions than those such as the Singapore Dollar, the Euro, the Hong Kong Dollar and the British Pound.

In practice, though, it is US Dollar weakness that is center-stage, both because it is the US that is currently involved and because it is the world’s most-traded currency. The Yen is benefitting, not just because of its haven status but also because, according to the Reuters newsagency, Japanese government officials are bracing for US President Donald Trump to get tough in trade talks, and are particularly anxious that the US could target Japanese Prime Minister Shinzo Abe’s weak-yen policy.

One opportunity, therefore, is to move into safe havens, especially the Yen. One pitfall is to think that because the US is a relatively closed economy the US Dollar should benefit.

The Euro and the Pound are also potential beneficiaries despite the openness of the Euro-Zone and UK economies because, for now at least, they are less involved. At the other end of the scale, Wall Street stocks have come under severe pressure because US companies have much to lose if their exports are blocked. European shares and commodity prices have suffered too, while government bond prices have risen.

The benefits of global trade

Another concern is that tariffs and other restrictions on international trade could affect economic growth more generally and therefore lead to lower interest rates. An analysis by the International Monetary Fund notes that nations are almost always better off when they buy and sell from one another.

There are wider advantages too. “In a difficult global context, trade remains a vector of prosperity, opportunity and peace, as has been the case throughout history,” argues the WEF. “Peace is the natural effect of trade. Two nations who traffic with each other become reciprocally dependent,” it quotes Montesquieu as saying in hisThe Spirit of Laws in 1748.