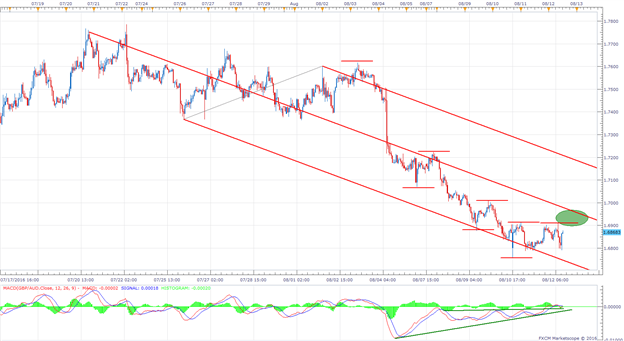 Is the downside around GBP/AUD dictaded by the slope?

Since the decision of the United Kingdom to remove themselves from the European Union, GBP/AUD has traded on the negative side for the last 3 months. In addition, on a weekly basis, these last 3 weeks have taken the cross to levels not seen since 2013. Currently, GBP/AUD accounts for a negative drop of 2.05% for the week.

As depicted in the chart above, it can be observed that since the beginning of August, GBP/AUD has been registering a series of lower highs and lower lows. Price action denotes that the current downward trend is still valid. But this short term trend could be coming to an end given that if we pay attention at the distance between the lower highs, it has been decreasing as they have been occurring and today’s trading price action almost invalidates the series.

As a complementary analysis, MACD lines and histogram are showing a divergent behavior with price action. Therefore, trader’s attention should on the lower high registered on August 12 for a breakout to the upside targeting the central and upper line of the depicted pitchfork channel.

Depicted in the chart below can be observed that price action since a year ago has been captured within the boundaries of the identical drawn slope lines. The slope at which GBP/AUD has been trading around is determined by the August low of 2015 and the low of October of 2015. Currently, prices are hovering above one of the inside slope lines, a line that has proven to be of good support in the search of lower lows for the cross during the last year. Therefore, traders should consider that a retracement is likely in the upcoming sessions.

If a continuation of the current donward trend were to happen after the hypothetical retracement on current support of the slope line, the next target to have in mind for traders would be the 100% expansion of the August 2015 High, April 2016 Low and the May 2016 retracement at 1.6464. 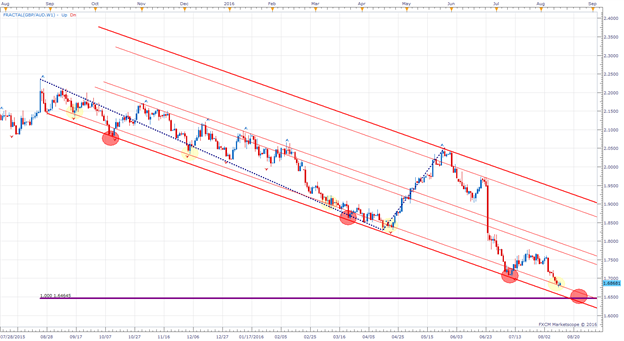 Short term downward price action seems to be exhausting. Lower lows and higher highs appear to be struggling to register meaningful advance and negative divergences exist between MACD and price action. On a bigger picture we are sitting on key support line. Therefore, GBP strength should be anticipated for the cross in the upcoming sessions.

As a contrary perspective, AUD continues strengthening despite negative divergences and GBP/AUD embarks on the search of the lower slope line support.

Are you a short-term trader? Then GSI is a must have tool for your trading! Check it out HERE