Article Summary:The GBP has been in a state of decline for 2013. With CPI being released on Tuesday, traders will await the announcement to determine market direction.

One fundamental new release that should be included on every trader’s calendar is the Consumer Price Index (CPI). Released on a monthly basis, CPI records the changes in price of a basket of goods and services for a specific economy. Tomorrow the UK is set to releaseCPI data, at 9:30 GMT, as noted on the DailyFX economic calendar.

Below we can see past CPI releases for the UK. Inflation has been declining steadily from a high of 5.2% in 2011 to current levels. The previous four readings have held steady at 2.7%, and expectations are set to come in slightly higher for this report. While an increase to a consensus of 2.8% may not have drastic effects immediately on the market, the results may clue us in to the future direction of the GBPUSD.

CPI numbers also have the ability to affect exchange rates, because as a direct measure of inflation they can affect central bank policy. As growth stalls and the inflation rate decreases, central banks may consider taking action through monetary policy by adjusting interest rates or increasing open market operations. Curerntly, interest rates are residing at a multi year low at .50% in order to spur the growth fo the UK economy. A rise in inflation may signal a need to revise this policy, or a surprise to the downside may encourage more central banking interverntion. Regardless of the outcome this even may have a direct relationship to price movements. 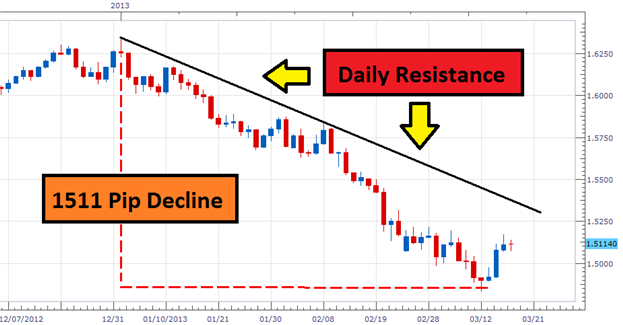 Above, we can see the current decline in the GBPUSD for the 2013 trading year. Price has already declined as much as 1511 pips and is entrenched in a strong downtrend. Traders should be mindful fo the markets current direction and consider the declining trendline for the pair. Currently this trendline has beenformed by connecting the January 2nd and February 8th highs. As CPI is released traders can use these pricing levels as an area of resistance. If price remains below these levels there is a strong chance of further GBPUSD weakness. While a positive CPI release and a break above 1.5250 would be a bullish signal for the currency pair.

To be added to Walker’s e-mail distribution list,CLICK HEREand enter in your email information

Are you looking for a scalping strategy for the FOREX market? Sign up for our free CCI trading course! CCI Training Course