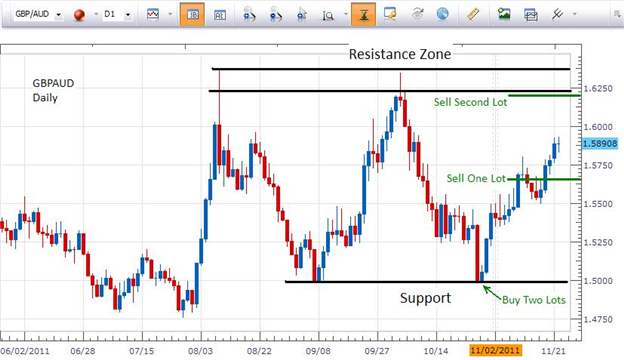 Locking in Profit when Trading a Range

When trading ranges that comprise many hundreds of pips and larger, I believe that it is prudent to employ a strategy that can “lock in profit” along the way as the trade moves in your favor.

This can be achieved by trading multiple lots.

In a range we want to buy at support and sell at resistance. So, in this case, at the support line, we would buy two (multiple) lots and set our stop just below the support line.

Then, approximately half way through the range, we would close out (sell) one of the lots, thereby locking in that amount of profit. At that point, we would also move our stop to breakeven on the remaining lot.

We would then let the remaining second lot trade up to resistance (the top of the range) and close it out at that level or just before. That would be the ideal scenario. However, if the trade does not make it to the top of the range and simply retraces all the way back down to support, we would be stopped out with a breakeven stop…in other words, no loss/no gain on the second position. But we would still have the profit from closing out the first position at the halfway point.

This strategy allows a trader to lock in at least a moderate level of profit (assuming of course that the trade has moved in their favor to a certain degree) even if the trade does not make it all the way to the desired target level or limit.

(A variation on this strategy would be to buy three lots, for example, and then close the first one out one-third of the way up the range, close out the second two-thirds of the way, etc.)

Conversely, if the trader is shorting the pair at resistance, the above strategy would be implemented in the same manner as the pair moves down in the range.