When using Slow Stochastics in a downtrend, the optimum sell signal given by the indicator occurs when the two moving averages comprising the indicator have been above 80 and then move below 80. 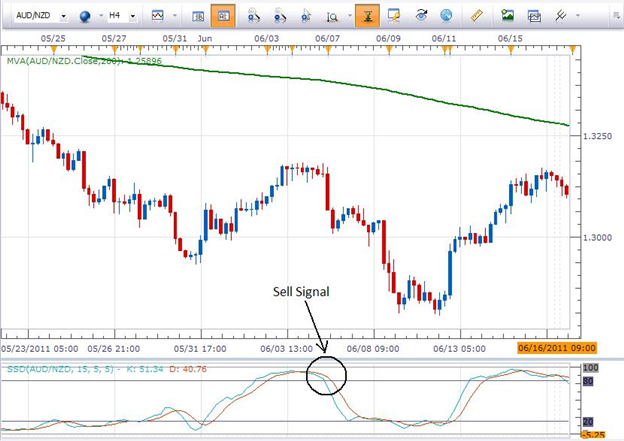 When using Slow Stochastics in an uptrend, the optimum buy signal given by the indicator occurs when the two moving averages comprising the indicator have been below 20 and then move above 20. 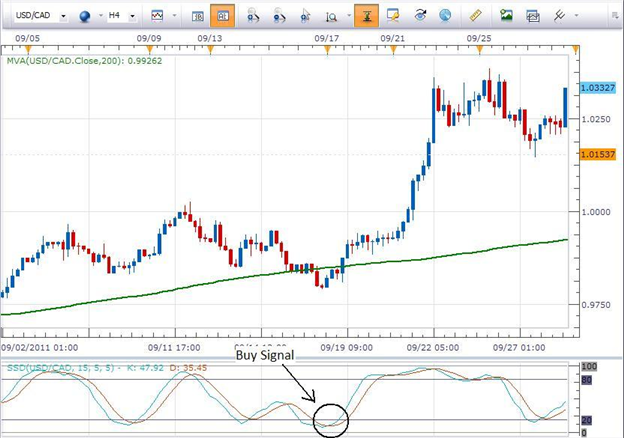 Since the above signals are the optimum signals, not as much attention is paid to crossovers that occur between the levels of 20 and 80. How should a trader react to those?

While “mid-level” crossovers are valid technical trading signals, in my opinion, they do not offer as much “pip potential” as do crossovers occurring at the 80/20 levels. 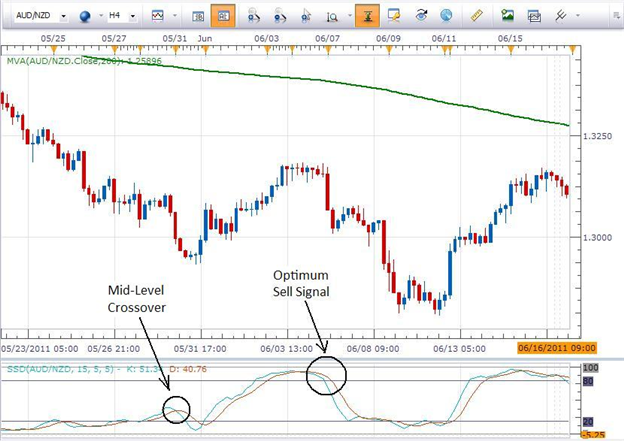 Allow me to create an analogy…

Think of the lines (moving averages) that comprise Slow Stochastics as a string on a bow that is used to shoot an arrow. The farther that the bowstring is pulled back, the more power it has behind it and the farther the arrow will go. With this in mind, look at the Optimum Sell Signal on the chart above and compare it to the Mid-Level Crossover. The crossover that takes place above 80 will have more downside momentum associated with it than will the mid-level crossover that takes place between 20 and 80. The bowstring is not pulled back nearly as far.

While both are valid signals to short the pair, the signal with the most pip potential behind it is the one that has the greater amount of momentum. In this case the pullback to above the 80 level would present trade with the greater pip potential. While this is not an absolute and will not prove to be true each and every time the condition presents itself, it does present a “trading edge” that I believe is worth taking.

For the above reason, I do not take mid-level crossovers as entry signals in my own trading. Rather, I exercise patience and discipline and wait for the higher probability signal to set up.