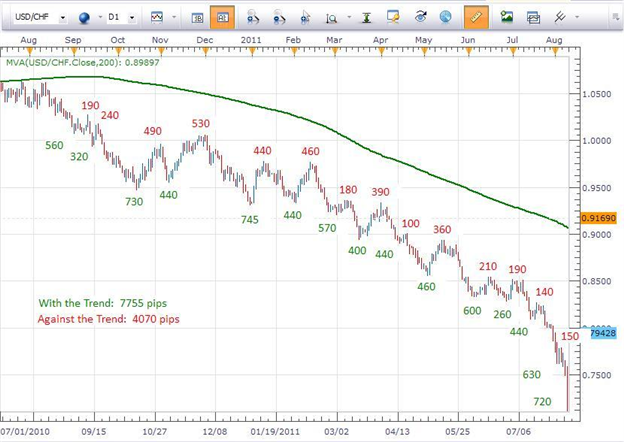 In our LIVE webinars each day, we always advocate taking trades in the direction of the overall trend as those will be the ones with the greater probability of success. That being said, there are two questions that are always asked: Why is that true? And, if that is true, is there really that much of a difference in the potential pips?

While pips can be made trading counter trend, they will come with a greater amount of risk. Essentially, when taking trades in the direction of the trend, the trader has the momentum, the “push” of the market behind them.

When trading countertrend there is less momentum pushing in that direction and the dominant trend can kick back in at any time negating some/all profits which may have been gained by trading against the trend.

Also, when a trader knows that they essentially have the “market behind their trade” when trading with the trend, they have more confidence to stick with the trade and let it mature as opposed to closing out the trade too early.

Lastly, counter trend entries need to be much more precise since you are trying to time an entry while it is moving in the opposite direction. On the other hand, entries with the trend can be more forgiving.

While we can definitely see that pips can be made trading counter trend, 4070 in this example, there is a significant difference in the number of pips earned by the trader who only took trades in the direction of the trend.

Based on this chart, trading with the trend in this example would have accumulated 3685 more pips, roughly 47% more, than a trader who only took counter trend trades.