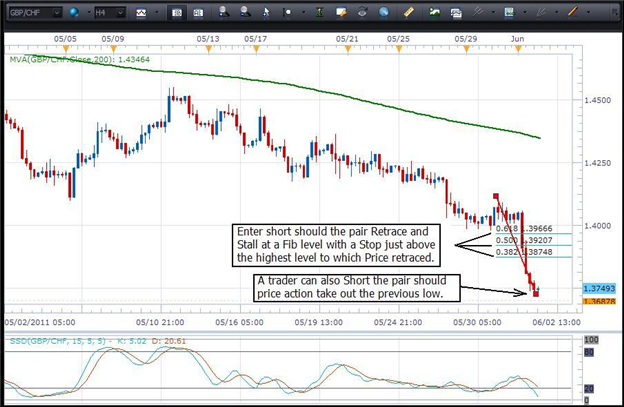 Should a Trader Enter a Trade That Has Just Made a Strong Move?

With the continuing strength of the CHF lately, many traders are frustrated because they missed the initial move and want to know how they can still take advantage of the situation.

First of all, a trader must be aware that these conditions can change at any time. Second, entering a trade out of frustration is not a good strategy.

The above being said, there are two ways a trader can contemplate shorting this pair…

The first and most desirable in my opinion would be to sell (short) the pair back in the direction of the Daily trend after it retraces and stalls at a Fib level. After a strong move to the downside such as this one, a retracement at some point is inevitable. Waiting for the retracement to occur BEFORE shorting the pair would be a prudent entry.

Should the pair retrace and stall at a Fib level, for “evidence” that the pair is stalling a trader would look for long wicks above the candle bodies along the Fib level. Dojis, Spinning Tops and/or Evening Star candle patterns forming at the Fib level would be additional confirmation that the retracement is potentially coming to an end.

Another entry plan would be taking a short position if/when the pair trades below its previous low. When price action can move below the previous low, which in this case happens to be an all-time historic low, it shows that the sellers are back in control on this pair.

If a pair is moving strongly to the upside, our trading plan simply would be reversed.