- The state of UK monetary policy and its impact on Sterling

- Global recession and the inverted US yield curve

Dr Andrew Sentance is a a noted policy hawk, business economist and former member of the Bank of England’s Monetary Policy Committee (MPC). In this edition of our podcast Trading Global Markets Decoded, our host Martin Essex talks to Andrew about the UK economic outlook, including UK monetary policy and GBP, negative interest rates, and the emerging economies traders should consider following.

Benefit from our discussion with Andrew Sentance and listen to the podcast by clicking on the link.

The podcast begins on the subject of UK monetary policy, and particularly how the MPC has failed to ‘normalize’ it. ‘I don’t mean hike interest rates to 5% but getting them up to around 2%, as the US has, seems to be more appropriate for the UK economy than sub 1% rates as enforced by the MPC,’ Andrew says.

‘Raising interest rates shows courage and [the MPC] has not risen to the challenge.’

Accordingly, Andrew also criticizes Governor of the Bank of England Mark Carney, identifying two mistakes on his part – signaling a rates rise that didn’t materialize, and not having a strategy for ‘normalized’ rates.

‘The Fed has [implemented a strategy] and are in a better position for it. They actually have the scope to reduce rates now but we don’t really have that in the UK.’

In Andrew’s view, the UK had the best prospects of the G7 economies – until 2016 and the EU referendum. ‘That sent the economy off-kilter and undermined our economic prospects. Any UK government now will struggle to deliver respectable economic growth.’

He says that 1 to 1 ½% growth is a realistic expectation over the next five years or so. But he adds, ‘One of the things I learnt through being on the MPC is how resilient the UK economy is.

‘Yes, a no-deal Brexit would be bad, but some of the figures put out by the Bank of England and the Treasury have been totally over the top.’ 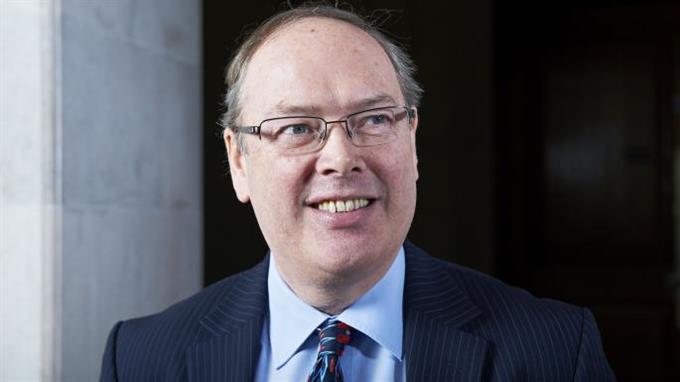 So where now for Sterling? ‘It will continue to decline,’ Andrew predicts. ‘I’m waiting for it to go down to 1.2000 against the US Dollar, 1.1000 against the euro and possibly below, because the political environment is not supportive of GBP.

‘Sterling is the major victim of the Brexit process, and it’s not good for the UK consumer, as it pushes up import prices, and hits UK spending power abroad.’

However, while the Pound may continue to fall, Andrew points out that UK stocks may actually benefit, as a weaker pound translates into higher value from foreign earnings, which are key for many FTSE stocks. As for bonds? ‘A Boris Johnson government will probably err towards more borrowing, more spending, cutting taxes and would likely not be helpful for bond values.’

Sterling has clearly reacted adversely to Brexit but is the euro also vulnerable?

What does Andrew make of negative interest rates, as seen in the likes of Switzerland and Japan? ‘It’s a bad direction for monetary policy,’ he says. ‘Look back to the 1930s when, even in the depths of recession, interest rates were kept at 2%. Once you push interest rates into negative you’re creating an artificial situation.

‘[That said], as a short term measure it’s not done too much damage. Many have gone that route for FX reasons; the Swedes and Swiss just wanted to keep their currency down against the euro.’

Talk moves to the possibility of global recession. How much stock should be put in the US yield curve inversion? ‘You can’t just look at that,’ Andrew warns. ‘This cycle started in 2009 and if we get through to 2025 without any really major correction we’ll have had the longest cycle in post-war history.

‘Market cycles are always with us. If we have a cycle that goes from 2009 to 2025 that would be quite a long one. If it got through to 2030 we would definitely be worrying about a collapse. So some time in the 2020s there should be a correction.’

Any specific trends to look out for in the markets? ‘I’ve always been a fan of Asian markets,’ Andrew says. ‘The center of gravity in the world economy has moved towards Asia. There remain concerns about China, and whether the Chinese economy will be politically stable, but the progression since the 1990s is such that Asian economies performed very well.

‘Smaller economies such as Indonesia, joined the ‘one trillion club’ of world economies in recent years, and other successful developing economies like Mexico should be a consideration for investors.’