Trading with the Stars

The evening star and morning star formations can be some of the most powerful reversal setups available to traders. In our last article, we looked at the Harami formation, and in this article we’re going to take this a step further with three-candle formations.

As we discussed in our last article, trading reversals can be a dangerous prospect given that we’re looking to go ‘against the grain’ by expecting near-term price movements to reverse.

But as we also shared, traders can use a combination of multiple time frame analysis and risk-reward to proactively trade in these types of conditions; so that when they’re wrong, they lose small…but if they’re right, they can look to win big.

The Harami is a two-candle formation that looks to trade market reversals at the very early stage of the move. The image below, taken directly from our last article, looks at a recent bearish harami on the EURUSD daily chart. 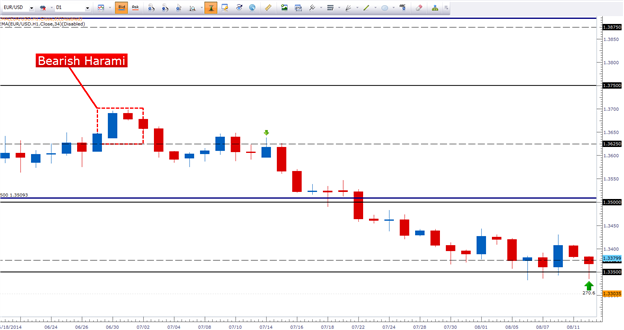 As we discussed in our last article, the harami is an early-stage reversal formation. We can take this type of formation a step further by looking for further confirmation in the setup.

The Evening Star is a three-candle formation that looks to trade bearish reversals. The formation is comprised of an initial bullish candle, followed by an indecision candlestick, which is then followed by a follow-through movement that sees the third candle close at least half-way below the body of the first candle. The image below shows the evening star formation in action in EURUSD: 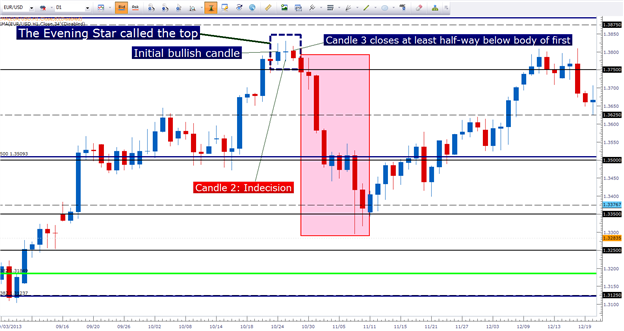 Notice how the evening star took place immediately in-front of a sizable move of over 500-pips. Let’s take a closer look at the formation itself in the image below: 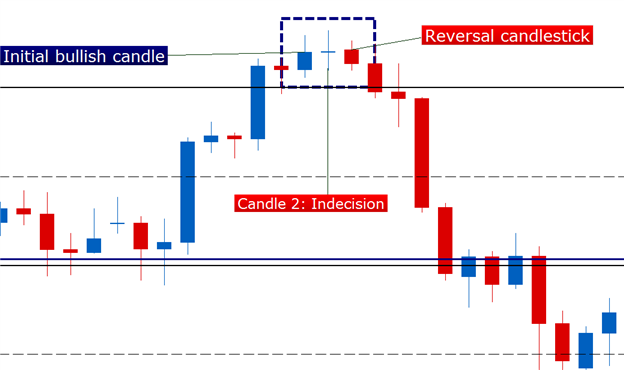 Think about the message that these candlesticks are telling you as this formation takes place… Buyers push prices higher in the first candle; and in the second sellers enter to take advantage of the new higher prices – seeing buying and selling pressure roughly offsetting. This balance of buying and selling pressure is indicative of dojis, spinning tops, and other ‘indecision’ candlesticks that can often be accented with long wicks and small bodies.

If the reversal pans out, excellent – the trader can look for three, or four times their initial risk amount. If the reversal doesn’t pan out, then the loss can be mitigated as new highs are made.

The Morning Star formation is the exact opposite of the evening star; and is a bullish reversal formation. The image below shows a recent morning star in GBPUSD before the most recent high came into the market. 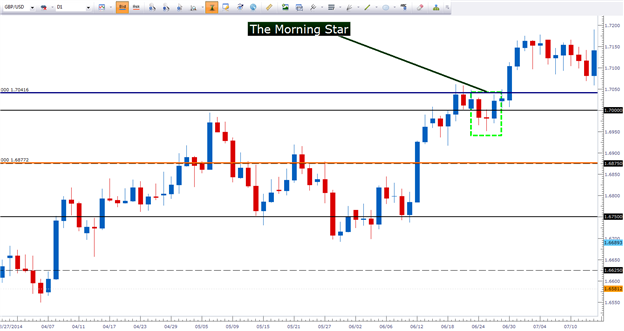 Let’s take a closer look at the formation in the below image:

The Key for Trading Reversals

As we had discussed earlier in this article and in the previous piece on reversals, what can make the reversal work for traders is risk-reward. Going against the grain isn’t an easy way of trading in a market, and if movements against the trader are left unchecked (with a protective stop) it only takes one or two really bad trades to wipe away everything from that trader’s account.

So with the evening star and morning star formations, the built in risk management from the formation can be extremely helpful. When looking to buy a morning star, traders should investigate stops underneath the low of the formation, and if confluent support is around that price level – even better.

Stops for evening star entries should go above the high of the formation, so that if the down-trend doesn’t materialize the trader can exit the position before the loss becomes unbearable.