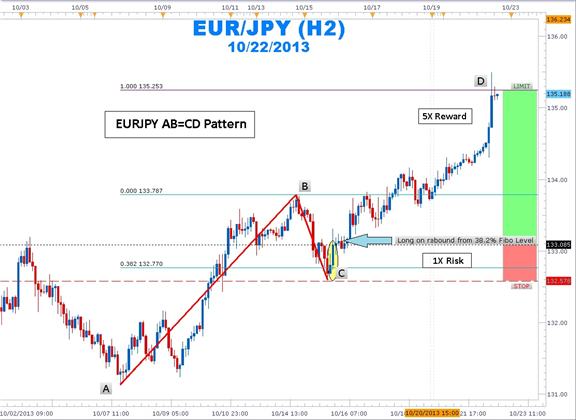 How to Trade the Forex Bullish AB=CD Pattern

- AB=CD Pattern is easy to identify on the charts

- The AB=CD Pattern must happen at specific Fibonacci points

Would you pay $1500.00 to learn this pattern? If you answered “No!” then would not have purchased the book with the first appearance of this pattern in 1935 written by none other than H.M Gartley, the father of harmonic patterns.

The Forex AB=CD Pattern or equal wave pattern is an impulsive move in the market. It is part of Elliott Wave theory, but you don’t have to know Elliott Wave in order to make use of this easy pattern.

The BC leg usually retraces to the 0.618 Level of AB but it should not retrace beyond the 0.786 retracement. If leg BC moves lower than the 0.786 Fibonacci retracement level then the pattern is invalid.

In addition, a shallow retracement to the 0.236 or 0.382 level shows traders are eager to end the correction and resume the uptrend as they are unwilling to wait for the 0.618 level

A sharp rebound from point C could have been entered on October 16th at 133.08 with five range bound candles before EUR/JPY really started moving. After entering long at 133.08, a protective stop could have been placed at 132.57 just below point C at 132.60.From there, a 264 pip limit could have been set at 135.25 which was handily hit on October 22nd.

In the above example the distance from point A and B was fairly equal to the distance from points C and D. However, an expansion of volume can lead to the D target point to move higher to other Fibonacci expansion ratios of 1.272, 1.382, 1.618 and even 2.618. Taking part of a trade off at the 1.00 expansion target and using a trailing stop for the rest of the position will allow a trader to participate in more of the move.

As you can see, the AB=CD is a useful pattern to add to your tool kit as it can provide trades with small amounts of risk in relation to the possible reward. Now you know your ABCD’s to finding good trades!