The Lifeblood of the US Economy: The Consumer

One of the best aspects of the Forex market is that is so accurately reflects how globalization has changed the world. If you view economics solely from the position of an equity trader, you’re bound to view the world through rose-colored glasses; focusing on just one of the many economies that make up the world financial system.

But in the forex market, a data print in one continent can send a currency across the world flying to the moon, or dropping through the floor. Price action can tell us where prices have moved in the past, but fundamental analysis is what molds future price movements.

The reason for this is rational. In the Forex market, everything is traded in pairs, unless a system like a currency basket is being used. But, more to that point is the fact that what benefits one economy may benefit another.

Nowhere are these impacts more evident than during the release of Non-Farm Payrolls each month. This is simply the number of jobs added to American payrolls in the previous month. There is a litany of criticisms of the statistic, but this is often the first glimpse the marketplace receives of employment data for the month prior. NFP is usually issued on the first Friday of every month, and the data pertains to the most recent month.

But volatility can be seen all over the place, not just in USD-related pairings. Take, for example, the EURJPY during the release of the August 2013 NFP report.

Data Releases from the United States can have far-ranging consequences 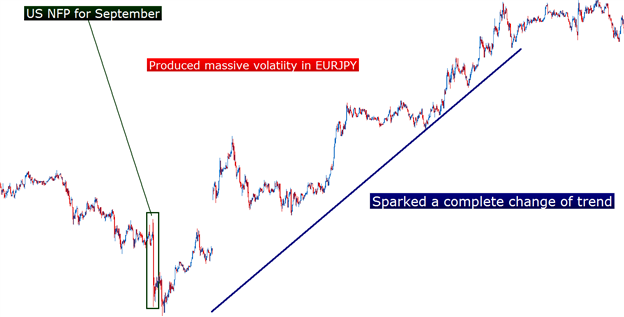 You can probably tell from this relationship, that there is another important factor in the function of economics: The consumer.

While employment can be a great gauge of economic health and a fantastic pre-cursor of future economic growth - consumer activity plays an equally vital role in the global economy. Consumer spending makes up over 2/3rds of all US economic activity!

And this is a good thing, because consumers spending money means that business make more profits; profits which can be re-invested in the business by hiring more workers, expanding operations, and increasing investments; all of which serve to create a synergistic effect of more consumer activity, more spending, and more growth.

Much like the number of jobs added in the largest national economy in the world can be used to gauge global economic health, consumer activity in the United States can tell economists quite a bit about what might be expected in quarters to come.

More active consumers and increasing consumer activity mean more of that economic synergy leading to even more growth throughout the economy. And more growth in the US economy means more growth for the rest of the world.

This is the report probably closest to Non-Farm Payrolls regarding amount of volatility that it may produce, and impact that it may have.

Like NFP, Advance Retail Sales is an early look at the most recent month passed, and this is both a blessing and a curse for the indicator. On the upside, the timeliness of this information is what makes it so important, and so widely awaited for by traders. However, because it is so timely, that leads to the one downside: volatility. This number is often met with numerous revisions in future months (also like NFP), and those revisions could potentially be massive. In some cases, revisions can cause a firmly positive number to become a negative number.

Advance Retail Sales can be powerful enough to reverse trends

This is a figure that is produced by the independent economic research organization, The Conference Board. The data is produced through mail-in surveys of 5,000 respondents, and asks for opinions on current business conditions, as well as expectations for future economic outlook.

The survey asks respondents to rate ‘positive,’ ‘neutral,’ or ‘negative,’ regarding their outlooks on 5 topics. And like Advance Retail Sales, releases of the Consumer Confidence Index can see massive volatility enter markets. For example, during the release of last month’s Consumer Confidence number, the GBPJPY saw movement of 50 pips right after the release, only to see a 120 pip retracement shortly in its wake. 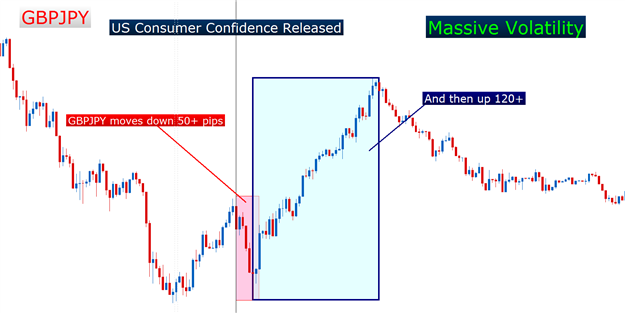 The prevailing thought is that the Consumer Confidence Index could be used to help project GDP growth. However, Consumer Confidence has seen some criticisms from economists as being too volatile, and for having perhaps a weak connection to overall household expenditures. This has led many economists and traders to focus more intently on the next data release...

This figure takes in fewer opinions into the data than Consumer Confidence, but has much more depth in the questions being asked. The University of Michigan Consumer Sentiment Survey will ask fifty questions of at least 500 respondents each month via telephone surveys, and this has helped to make this statistic very valuable to traders and economists attempting to gauge US Consumer Activity.

Because this number is so widely awaited for, the volatility ensuing after its release can be massive, just as the two previous releases that we investigated.

A little bit more about this news release: The preliminary report is usually the more volatile release, and is issued on or around the 10th of each month. This includes 60% of answers from respondents. You’ll see this noted in the economic calendar of DailyFX as below:

The final release is usually issued towards the last business day of the month, and can also move markets albeit not usually as much as the preliminary report due to the fact that multiple weeks have passed, and many other indicators of consumer activity for the observed period have made their way into the market. The final release will show in the economic calendar such as this: