The Consequences of Currency Devaluation

Article Summary: This article will take an in-depth look into the primary consequence of Currency devaluation policies: Inflation. Moderate inflation is generally considered to be a good thing, but too much inflation can be difficult to contain and become a catastrophic force to an economy.

I still remember the first day of Microeconomics 101, being flummoxed by the prospect of inflation being a ‘good’ thing. After all, if prices are increasing – that means you can buy less stuff with the same amount of money, right? This surely sounded like a destructive force to me.

It was only after that first class, in speaking with the professor that I learned about the important relationship between interest rates and inflation. The professor explained: “Inflation is like a byproduct of growth… as salaries increase and costs go up, companies have to charge higher prices for their goods. The higher prices on those goods could potentially scare customers away, so too much inflation can be a bad thing. When inflation looks to be getting too high, The Federal Reserve can increase interest rates to bring inflation back down.”

My professor continued, “inflation could be a good thing in moderation, as it is a sign and byproduct of growth in an economy.”

This stuck with me, the fact that we have a ‘sweet spot’ for inflation, and that too much or too little can wreak havoc on financial markets.

But to see what a destructive force inflation can be, it might help to look at an example of an economy that was absolutely ravaged by rising prices in the face of currency devaluation.

A Case Study of Inflation

The nation of Zimbabwe is a small country located in the southern portion of the African continent. The nation was under British Colonial rule until 1965, when a fight for independence began, and this came to fruition in 1979 with elections to be held the following year. In those elections, Robert Mugabe won in a landslide, and has taken on a primary role as a ‘leader’ of the country ever since.

Since then, the country has faced indomitable hardship. A ‘land reform’ program was initiated shortly after those elections, in which land was ‘redistributed.’ Given that the country was under British rule for nearly 70 years, there was a lot of land taken from farmers and given to Mugabe supporters in the ‘redistribution.’

Unhappy with the results of his ‘land reform’ program not redistributing arable farm land fast enough, which up to that point had been defined by a ‘willing-buyer, willing-seller’ rule, Robert Mugabe began to forcibly redistribute property in the year 2000. This is often called a ‘fast-track land reform’ program.

This was a major turning point for their economy. Agriculture was a major export of Zimbabwe, and many of the farms that were previously producing and exporting crops outside of the country were now in the hands of someone else; in many cases, those farms were in the hands of government officials that didn't know how to farm. Inflation in the year 2000 in Zimbabwe was over 55%, but only one year later in 2001 inflation had reached over 112%. As reference, this is a picture of a note denominated in Zimbabwe dollars at the time:

As land was continuing to be redistributed, capital was flying out of the country. Investors were losing confidence in being invested in Zimbabwe, and didn’t want to take on the risk of having their capital tied to a Mugabe-led regime. Inflation in 2003 was 598%.

As capital flew out of the country, the Zimbabwe dollar started to crumble. Sanctions were later placed on the nation by The United States, and this made the future of Zimbabwe even more opaque.

With many essential goods being imported into Zimbabwe, and with their currency weakening – these products became even more expensive and it became even more challenging to purchase basic life necessities like food and shelter.

In 2006, Dr. Gideon Gono, then the head of The Reserve Bank of Zimbabwe, embarked on a currency ‘re-evaluation,’ in which a new currency would be printed. The ‘new’ dollars were to be worth approximately 1000 ‘old’ dollars. Inflation in 2006 was 1,281%

All told, there were four different variations of Zimbabwe Dollars in use over a 3-year period.

Inflation in 2007 was 66,212%, and in 2008 reached unmanageable levels before use of Zimbabwean currency was suspended. In one of the latter prints, this note gained international attention (and is still a collector’s item today): 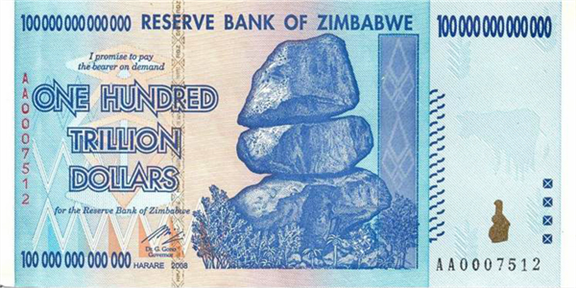 Each redenomination was another blow to investor confidence in Zimbabwe, and only saw more capital leave the country.

By the third ‘redenomination,’ the economy of Zimbabwe had already become ‘dollarized,’ that is – using the US Dollar as the primary currency. This was the beginning of the downward spiral that engulfed Zimbabwe, and saw the eventual abandonment of their currency.

Once inflation became uncontrollable, it took on a life of its own and few actions could slow its impact to the Zimbabwean economy.

This is precisely what the Federal Reserve fears, and the reason that the Bank of Japan did not embark on a more aggressive policy of easing earlier in their economic recession.

Inflation can be a good thing, but only in moderation – and artificially weakening a currency in an effort to propel inflation which may, in-turn, promote growth runs the very real risk of eroding investor confidence.