The Fuel of a Currency War, Part 3

Article Summary: In an effort to prevent another Financial Collapse, the world’s largest Central Bank has taken on massive intervention efforts in an effort to stimulate their economies. This environment has been dubbed ‘The Global Currency War.’ In this article, we examine the center of the Currency War in The United States, and the impact previous interventions have had on risk assets like the S&P 500.

After the Troubled Asset Relief Program (TARP) failed to provide lasting support to markets in 2008, the first round of Quantitative Easing was enacted in an effort to provide liquidity to a financial system that was in massive distress. The economic environment was so uncertain and many of the largest banks around the world were in such a difficult spot as the housing bubble was blowing up that lending slowed to a glacial pace.

This is what really worried economists and Central Bankers, because if lending continued to slow even further – more pressure would be added to an already fragile financial system and the possibility of additional catastrophe continues to grow. After all, this fear of lending and hoarding of cash is often one of the primary attributable causes of The Great Depression.

This is where Quantitative Easing came in; a process by which The Treasury Department in the United States printed new US Dollars to buy bonds. This had the side-effect of providing massive weakness to the currency, as these new dollars being printed did not bring any new value into the system – it merely created more units for the same amount of value. The chart below is the ICE Dollar Index in response to TARP and the first round of Quantitative Easing. 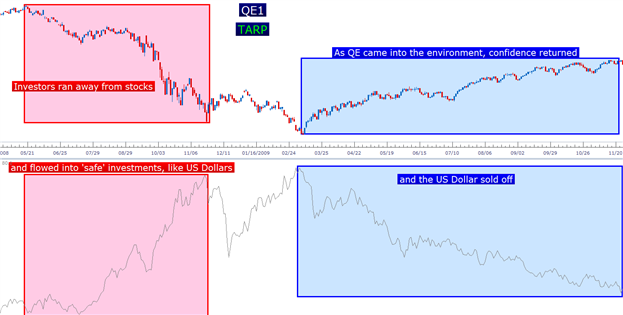 Unfortunately, the effects of TARP and QE1 were short lived, as investors began to grow fearful and more worried when economic data didn’t appear to improve in light of the more accommodative conditions provided by The Fed. And with the Financial Collapse so fresh in the memories of money managers around the world, this introduced even more concern into the environment. This led to another round of Quantitative Easing enacted in the 4th quarter of 2010, called QE2, in an effort to further prop up The United States economy. And for a time, this worked.

QE2 provided additional support to the S&P 500, and the US Dollar sold off massively 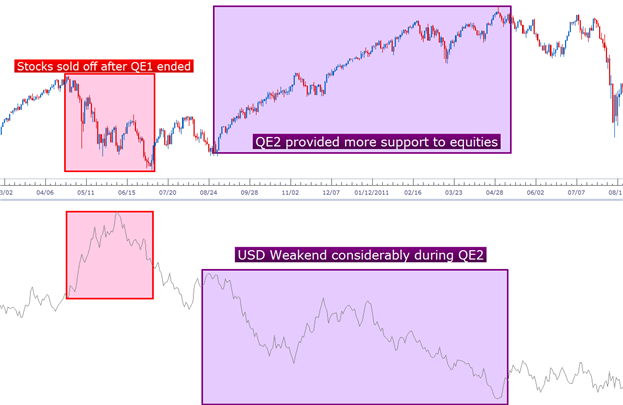 The Federal Reserve had hoped that QE rounds one and two would provide enough satiety to the economy for economic data to pick up.

Unfortunately, many of those data points did not improve to the level of stock valuations at the time. When QE2 ended, stocks faced another massive sell-off. This time, The Federal Reserve was concerned about doing another round of Easing, as all of the additional dollars being put into the economy ran the risk of bringing in extreme inflation. So after QE2, the Fed embarked on Operation Twist; a program designed to sell short-term bonds (with maturities less than 3 years), and buy long-term Treasury bonds (maturities of 6-30 years).

This differs quite a bit from QE, in which new dollars are being printed and introduced into the environment. As such, the impact from Operation Twist was far different from that of the first two round of Quantitative Easing, and the US Dollar was not expected to see the same element of weakness since the currency was not being mathematically devalued by the printing press. The chart below will show the differing effect on the US Dollar, while providing a similar stimulus to stocks.

Operation Twist helped support the S&P, but the US Dollar strengthened 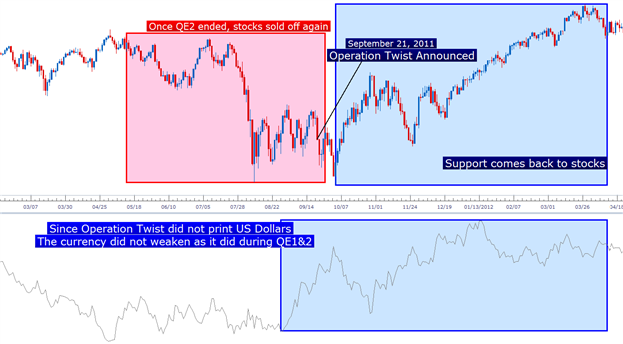 This is where things start to get interesting…

As Operation Twist was appearing to near its end, The Federal Reserve wanted to take a patient approach to evaluate the economy and how the previous rounds of stimulus may have helped. Unfortunately, the results were far from what was hoped for. Markets begin selling off and economic data began to take a turn for a worse. The month of May 2012 was especially brutal, as the S&P 500 lost 8% between May 1st and June 1st of last year, and much of the financial world was running for safety. The US Dollar saw strong in-flows as cautious investors became more willing to accept the meager yields on US Government Debt simply for the safety of their funds. The chart below will illustrate this climactic period:

The S&P faced turbulence in the absence of stimulus; US Dollar saw strength on a ‘flight-to-quality’ 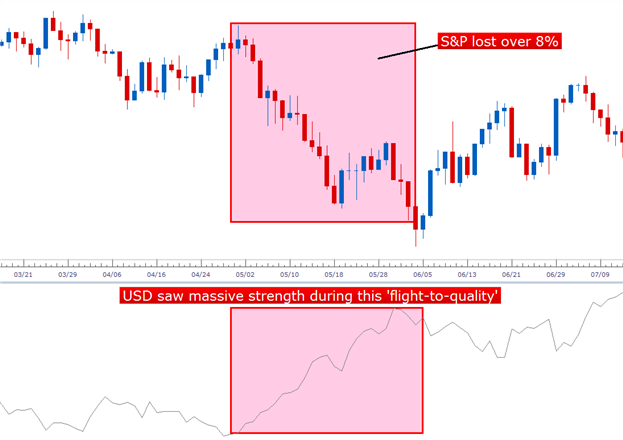 June 1st of 2012 was an important day for markets. Non-Farm Payrolls were released for the month of May, and a massive miss initially hastened the decline on many stock indices. But during the trading day, markets began to rally.

Investors had become conditioned to expect The Federal Reserve to take action to shore up the economy. Later in June, The Fed announced an extension of QE2 to extend the program through 2012. And despite the fact that economic data was continuing to come in softer than expected, risk assets continued to increase in value; illustrating the markets hopes for another round of QE. Stocks rallied all the way into the September meeting of the Federal Reserve, and at that meeting the much awaited 3rd round of Quantitative Easing was announced.

On September 17th, not two full weeks after The Fed announcement of QE3; the S&P 500 had made its high for the year. A strong sell-off ensued as investors began to look at the next potential problem in the US economy: The Fiscal Cliff.

The interesting part about the market’s reaction to QE3 is noticing that the US Dollar did not weaken nearly as dramatically as it had for previous round of Easing. And not only that, the rally after the intervention was much shorter than had been seen previous. Notice on the chart below, keeping QE3 in relative scope of previous round of intervention, the waning impact on the US Dollar and the shorter life-span of rallied taking place thereafter:

A market dependent on stimulus; each dip attacked with more intervention 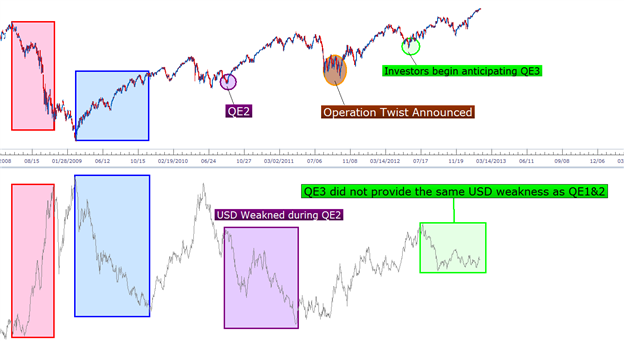 With twist set to come to an end at the close of 2012, The Fed announced another extension of the program, albeit with a slightly different design, authorizing the purchase of up to $85 Billion per month (but just like Operation Twist, this is done without printing new US Dollars).

At this point, the Fed is aggressively continuing with their easing policies moving into 2013, and this time QE has an unlimited scope that they can continue to utilize until employment numbers begin to improve.

But as evidenced from the most recent rounds of stimulus, it appears as though The Fed’s ability to weaken the dollar is beginning to wane as competing economies around the world have begun to embark on similar action.