Article Summary: Price Action is the study of technical analysis using the most important indicator available to traders: Price itself. This article will walk through a current trade setup as outlined in The Forex Traders Guide to Price Action.

Central Bank commentary continues to be a primary driver in not only the currency markets, but equity and fixed income markets across the globe.

With a potentially contentious G20 meeting set for the latter portion of the week, accented by speculation that Japan may come under fire for their recently instituted policy of driving additional weakness into the Yen; markets can continue to see heightened volatility on the back of Central Banker commentary.

With few signs of significant growth in Japan, or the United States – the largest national economies in the world have embarked on massive intervention programs with the goal of weakening their currencies; which can lead to an improvement in import-export balances that can hopefully amount to economic strength. We looked at this very premise in our article, The Fuel of a Currency War, Part 2.

As we looked at in the article, a weaker currency can bring enormous benefits to an export-based economy like Japan. This type of action also comes at the cost of other economies, such as Europe, which can, in-turn, see an increasing value on their currency. This increasing cost of currency can make it more expensive to sell goods overseas, and this can add much more additional pressure to an economy. We examined the challenge that a strengthening currency can present in the The Fuel of a Currency War, Part 1.

So, if a currency is too strong – the economy risks seeing smaller exports and greater imports (since imported goods are now cheaper), and this can present a multitude of challenges to companies based in that economy.

This is precisely what is being felt in Europe right now. An economy that is facing double-digit unemployment, while still teetering on the brink of disaster is seeing their huge moves higher in the value of their currency. This increase in the value of Euros can make a European recovery even more daunting. Without the ability to increase exports, many troubled nations in Europe (such as Spain, Italy, and Ireland) could face continued headwinds.

The fears of a currency war have filtered in to the market, and Central Bankers and politicians are on high-alert as the global economy sits in a tenuous state. Bankers are standing by appearing vigilant to defend their currencies, and economies.

And while all of this may sound like it could spell doom and gloom for the Euro zone, the pair continues to show its bullish up-trend as indicated by higher-highs, and higher-lows on the Daily chart.

Despite a spate of bad news, EURUSD uptrend has remained in-tact 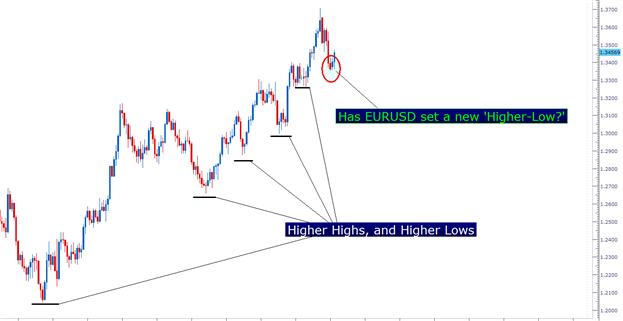 This can lead to exceptional volatility across markets in the coming weeks, and traders will likely be best served by continuing to focus on risk management as a primary goal in any strategy utilized.

The next candle on a chart is always going to be unpredictable, but in a volatile market – the cost of being wrong increases. So while it always behooves traders to utilize strong risk management, volatile or fast markets make it perhaps even more important.

Traders can look to be more patient or selective with entries, or perhaps even demanding more aggressive risk-reward ratios on any setup taken.

Below is a setup that could offer traders advantageous risk-reward ratios, in accordance with the DailyFX Traits of Successful Traders research.

Traders can look to play a continuation of the up-trend in EURUSD by placing a stop under the most recent swing-low presented on the daily chart, with the goal of taking profits just inside of the recent high that was hit.

With this setup, if the recent swing-low holds the trader could see upside. If the swing-low does not hold, and the trend does not continue – this stop allows the trader to exit the position before further lows are faced.