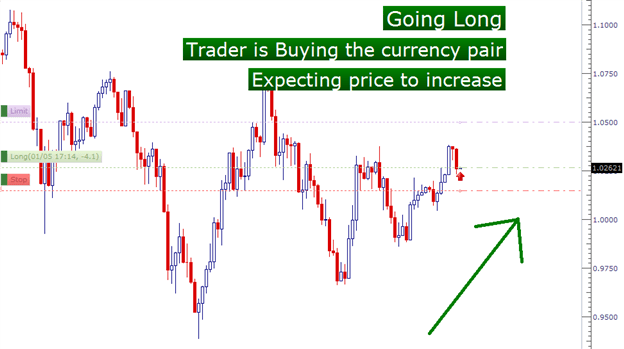 The Long and Short of it

Aspiring traders will often be familiar with the concept of buying to initiate a trade. After all, since many of us are children we are taught the basic premise of ‘buying low, and selling high.’

In financial markets, jargon often plays a key role. Jargon helps show familiarity and comfort with a particular subject matter, and nowhere is this jargon more apparent than when discussing the ‘position,’ of a trade.

When a trader is buying with the prospect of closing the trade at a higher price later, the trader is said to be going ‘Long,’ in the trade. The following graphic will illustrate the dynamic of a long position:

While this premise may seem easy enough, the next may be slightly more unconventional to new traders.

The concept of selling something that isn’t already owned may prove as a confusing concept, but in their ever-evolving pragmatism traders created a mannerism for doing so.

When a trader is going ‘Short,’ in a trade, they are selling with the goal of buying back (to cover the trade) at a lower price. The difference between the initial selling price, and the price at which the trade was ‘covered,’ is the traders profit to keep less any fees, commissions, or selling expenses. The chart below illustrates a ‘Short,’ position. 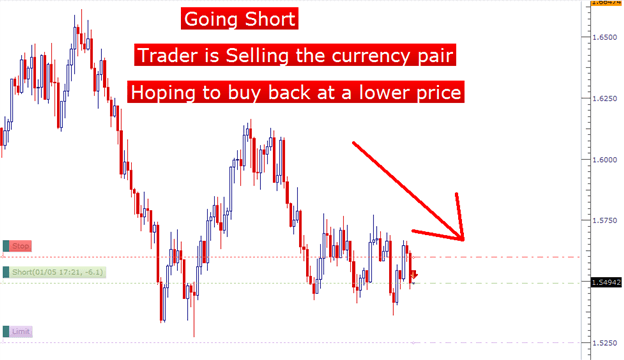 It’s important to note the interesting distinction between currencies and other markets. Because currencies are quoted with two sides (each quote references 2 different currencies taking opposing positions), each trade offers the trader long and short exposure in varying currencies.

Next: Profit in Falling Markets "Short Selling Basics" (23 of 48)