How Trailing Stops can assist with Trade Management

How Trailing Stops can assist with Trade Management

I want to start by stating that I believe there isn’t one perfect way to exit a trade. Never has been, probably never will be. While we are in a trade, much like before we enter – we have no control over price nor is there any way of predicting what will happen next.

Traders are faced with the age-old conundrum: “Should I risk my gains in an attempt to get more, or should I take the money and run?”

In both scenarios there is opportunity cost. If we leave the position open in an attempt to get additional gains, and the trade reverses against us – well we’ve just given up our profit. If the trader didn’t adjust the stop to breakeven while being up in the trade, the trader very-well may end up taking a loss; allowing a winner to become a loser, which can be a painful psychological experience.

On the other hand, if we decide to take our profit off the table and the position continues moving in our favor – well, we’ve just given up potential profit, which in the case of an extended trend, can be significant.

The question of whether or not to take profits is confounded by the issue that as traders, we will likely never know definitively what will happen next.

One option for combating this conundrum is the ‘Trailing Stop.’ The stop, as many traders know, is a mechanism by which we can manage risk. By placing a stop on the trade, we are drawing our line in the sand, attempting to limit the risk of the position moving against us. Many traders associate stops with losing their trades.

But it doesn’t have to be that way. Stops can close out profitable trades too.

The ‘Trailing Stop,’ is a stop that is adjusted as the trade moves in your favor.

Trailing Stops come in many different shapes, and this can be customized to the traders’ goals in the trade. The below graphic illustrates the mechanism of a trailing stop:

As you can see from the above illustration, as the position continues moving in the trader’s favor the stop is continually adjusted higher; locking up additional gain as the stop is progressively moved higher.

If the currency pair retraces beyond the stop value, the trade will be ‘activated,’ and the position closed. The hope of using the trailing stop is that the move will be strong enough to adjust the stop far beyond where I may have initially looked to take profits; allowing me to garner an additional gain.

The Dynamic Trailing stop will adjust the requested stop value higher for each 1/10th of a pip movement in the trades’ direction.

The Fixed Trailing stop will adjust when the pre-determined pip-move takes place. For instance, in the below graphic while opening a market order, I’ve added a ‘Fixed trailing stop,’ of 10 pips, set at 3500 on my short position. 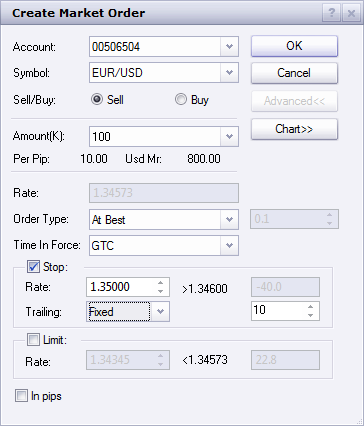