Silver prices are trading up this morning, as the US Dollar continues to sell off this week. If silver closes higher, this will be the sixth higher close in the last 7 trading sessions. Fundamentally, commodities traders will be looking at US ISM Non-Manufacturing figures this morning, which are expected to be released at 56.7. However, larger event risk looms with tomorrows US NFP figures expected to be released at 178k.

Technically, silver is rallying along with other metals, but the daily trend remains bearish under its 200 day SMA (simple moving average) at $17.79. In the short term, the commodity is showing a bullish bounce with the creation of a series of higher highs. Intraday the next key point of resistance for silver prices is found at $16.77. A rally beyond this point of resistance opens the pair to test the December 15 2016 high at $17.21 However, a rejection at present values suggests that silver may return to previous daily lows at $15.64. 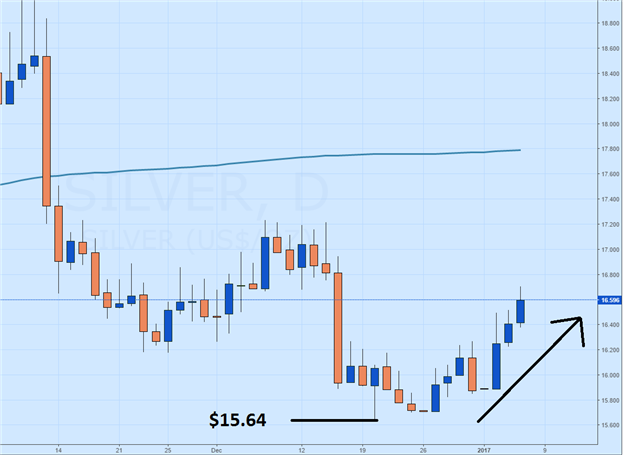 Intraday trading values to watch for the US Dollar (Ticker: DXY) includes support found at 102.23. If the Index bounces at this value, it may suggest that silver may continue to decline for the remainder of the session. In this bullish US Dollar scenario, traders may look for the DXY to test the next value of intraday resistance found at 102.81, followed by resistance found at the R4 pivot at 103.10.

However if the US Dollar continues its decline, the next support for the DXY is found at the S4 pivot at 101.94. A move below this value may be interpreted as a bearish breakout. In this scenario, traders may begin looking for a lower low in the US Dollar coupled with a higher high in commodities such as silver. It should be noted here that the DXY has attempted to break below this point once today, and has so far failed to create a lower low.

US Dollar, 30 Minute with Support & Resistance. 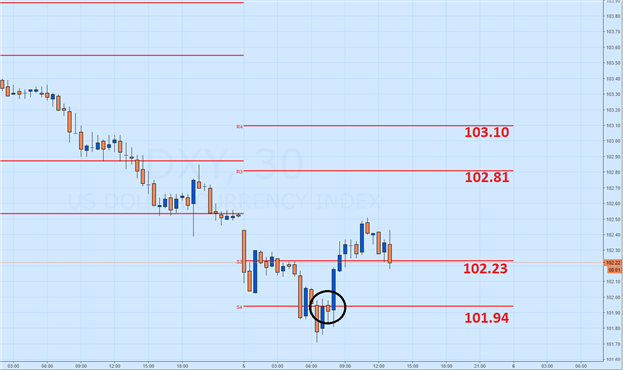