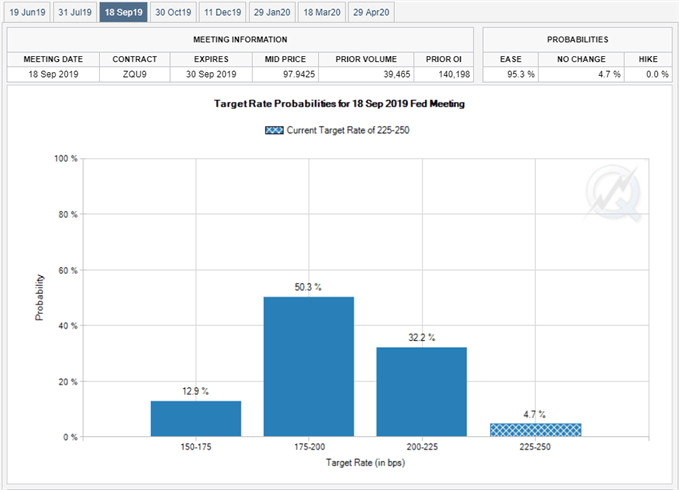 EURUSD struggles to retain the advance following the European Central Bank (ECB) meeting, but recent price action raises the risk for a larger correction as the exchange rate breaks out of the bearish trend from earlier this year.

It seems as though the ECB will keep monetary policy on auto-pilot as the central bank prepares to launch another round of Targeted Long-Term Refinance Operations (TLTRO), and the Governing Council may largely endorse a wait-and-see approach at the next meeting on July 25 as President Mario Draghi is scheduled to step down at the end of October.

In turn, attention turns to the Federal Reserve as the central bank is slated to update the Summary of Economic Projections (SEP), and a material adjustment in the forward guidance for monetary policy is likely to influence the near-term outlook for EURUSD as market participants prepare for a change in regime.

The Federal Open Market Committee (FOMC) faces a growing dilemma as President Donald Trump tweets that “the Fed interest rate way too high,” and the central bank may ultimately show a greater willingness to switch gears later this year as the Trump administration relies on tariffs to push its agenda.

In response, Chairman Jerome Powell and Co. may project a lower trajectory for the benchmark interest rate, with the US Dollar at risk of facing a more bearish fate over the near-term as Fed Fund futures may continue to show a greater than 90% probability for a September rate cut.

The broader outlook for EURUSD is no longer tilted to the downside as both price and the Relative Strength Index (RSI) break out of the bearish formations from earlier this year.

With that said, EURUSD stands at risk for a larger correction as the exchange rate breaks out of the range-bound price action from May and holds above the Fibonacci overlap around 1.1270 (50% expansion) to 1.1290 (61.8% expansion).