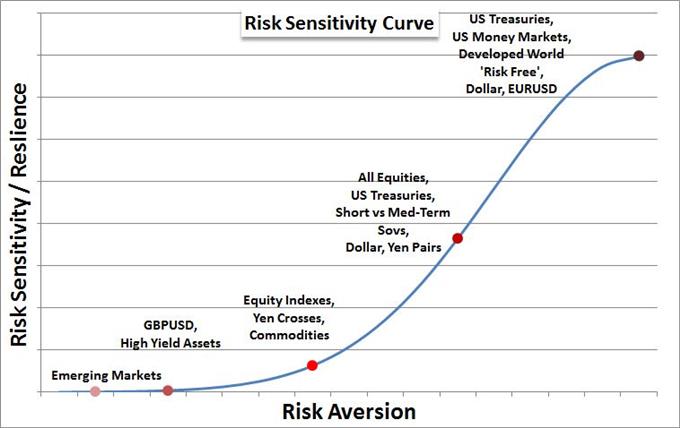 If Equities Tear Down Risk Trends, Don't Expect the Dollar to Immediately Surge

The markets are once again flirting with the idea of toppling risk trends and in turn causing a systemic tidal wave of capital that generates strong bouts of volatility and perhaps even sustainable trends. When the markets are rocking and rolling, the Dollar is typically a prime benefactor. Given the credit quality and liquidity the US currency represents, a history of investors fleeing to its safe harbor in the past has earned the Greenback the stature of a primary safe haven for the broader financial system. That life-line role has not changed given the structural elements underlying it. However, the currency doesn't play the safe haven in every shift in the fundamental wind.

In the past three years, the Dollar has found itself in a position that mirrors the course of other risky assets like US equities or emerging market currencies. The Federal Reserve's ambitious pursuit of a hawkish monetary policy course despite the deep accommodation its global counterparts continued to pursue won the US currency the appeal normally reserved for carry currencies. While the hope of a slow lift off from near-zero rates does little to provide a meaningful yield income, the broader market was in a mind set where any advantage would be chased down. And opportunist speculators were eager to jump in front of capital waves that followed more mundane investment courses. A 30 percent advance from the low to high from the DXY Dollar Index since 2014 built up a significant amount of speculative interest. That has benefit the currency on the way up, but it threatens it should the wave crest - a reality that will trouble those that expect USD to snap back to its haven status at any sign of trouble.

Just as the Dollar does not climb at any waver in traditional assets during 'normal' conditions, we should not expect a pip-for-pip response to marginal change in confidence. In general, buoyant sentiment (often considered 'risk on') looks to either steady or rally the currency. Moderate optimism will leave the markets to debate how far or short the prevailing rate forecast is relative to the Fed's actual intentions. Full-blown speculative reach would likely translate into growth and true inflation that in turn spurs the central bank to action. Alternatively, a collapse in confidence market-wide would shed all concern about competitive yield and put the focus on liquidity - a view which would certainly benefit the Dollar. Yet, what happens in more temperate periods of risk aversion? The risk-reward balance is still a comprehensive concern, and the Dollar has a lot to lose as its hawkish future dims against the leveraged expectations. And so, USD bulls find themselves dependent on complacency or a market crash. Anything in between would usher in a bear trend. We revisit this important fundamental attribute for the world's most liquid currency at the cusp of another sentiment shift in today's Strategy Video.