If you are a keen observer of macro fundamental event risk, you will readily notice the sticky situation we currently face in the global financial markets. On the one hand, last week’s tumble in benchmark risk measures like the US and Chinese indices puts us at serious risk of a systemic shift. Then again, the principal driver of fear – monetary policy and particularly US policy – has taken a back seat this week in the lead up to the official May 4th FOMC rate decision. Can factors that are often considered secondary like the tech-sector’s earnings season or a renewed pressure in the world’s second largest economy (China) really take up the mantel of directing global sentiment? We will find out this week. As for a reliable weathervane to otherwise difficult-to-read sentiment, I will be watching USDJPY at the cross roads of yield appetite and risk sensitive. That said, the ebb and flow of more traditional assets still matters. For the US equity markets, the S&P 500 kicked off the trading week with a gap lower that was a modest effort to close the gap to the Nasdaq 100’s remarkably close in ‘bear market’ territory through Friday’s end. Yet, despite the jump lower and subsequent morning selloff, a recovery through the day would end us in the green and with the sharpest intraday reversal (highlighted in a technical ‘lower wick) since late January. I don’t consider this a definitive reversal with conviction behind bullish interests, but it an unmistakable move. 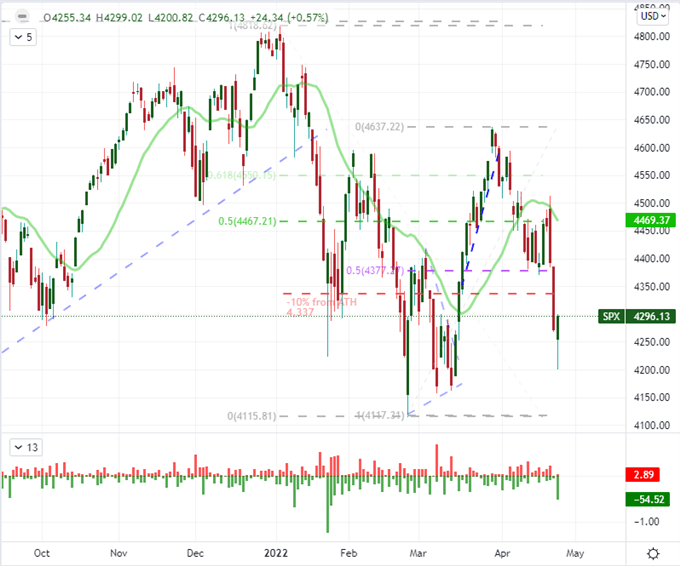 If you were looking for fundamental leads for the activity this past session, there are a few themes that should be tracked for their ability to strong arm the market in one direction or the other. The focus on global monetary policy – and particularly US policy – will be on the backburner as we are in the self-imposed phase of quiet that the FOMC observes before its official policy meeting. That will be a stark contrast to what we have seen over past weeks where the hawkish bearing of the group has defied the odds and managed to feed an ever more-aggressive view of what lies ahead. That is not to mean that there is no rate speculation in the US or elsewhere, just that there are other matters that can take up the lead. Earnings is one such matter. We will start the run of FANG+ corporate reporting after today’s close with the scheduled updates from Google and Microsoft. How market-moving could these reports be? Consider the sway of Netflix last week along with the recognition that that FAANG member has a sharply smaller market cap than either of the aforementioned tech firms. And, as for the headline smashing news that Tesla Elon Musk has lead a successful buyout of social media company Twitter: there are some very remarkable, big picture implications to the news. That said, the market spill over is likely to be less systemic and slow in the making given perspective of the deal (a $44 billion deal against Apple’s $2.63 trillion market cap for comparison) and the health fundamental competition with which we are dealing. 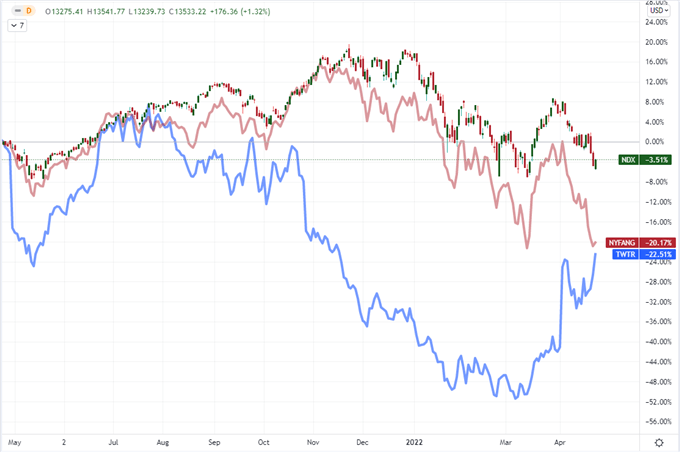 What Should We Be Watching for Tuesday Trade?

While I’m not going to be writing off the dominant fundamental themes from the past weeks and months, there at least seems a break in their dominance over the market’s immediate guidance. Monetary policy is perhaps the most frequent guide to speculative bearing for the entire financial system over the past two months, but the wait for the FOMC’s rate decision next Wednesday has a disproportionate influence over our course for this otherwise global matter. In its place, we have some more targeted fodder to contemplate. On the US docket, the run of: durable goods orders; new home sales; housing prices and (top billing) consumer confidence from the Conference Board presents a very comprehensive growth potential perspective. That said, the macro run will be important course correction for the US capital markets through the active Tuesday session; but the score changes significantly after the close. Shortly after the NYSE squares off for the day, we are due earnings updates from Microsoft, Google and General Motors. The auto manufacturer – with its implications for consumer spending, financing and supply chain issues aside – the third and fourth largest market cap (MSFT and GOOG respectively) are more than just tech sector leaders. They are indicative of investor confidence. 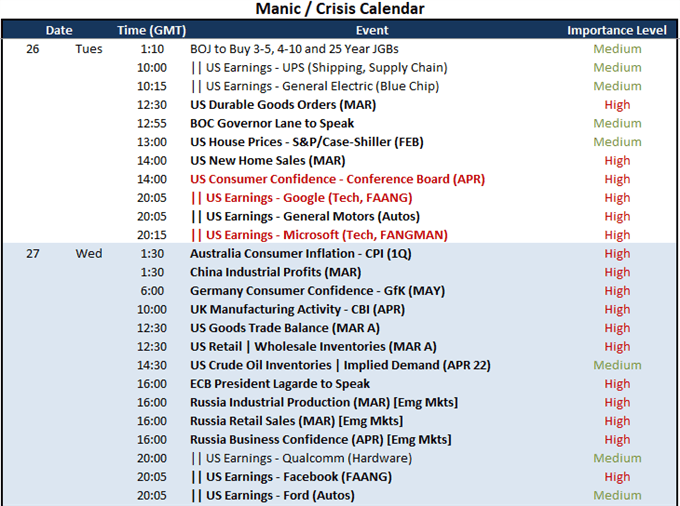 From scheduled theme to open-ended threat, any self-respective macro observer will be keeping close tabs on the bearings for the Chinese financial system. The Shanghai Composite dropped an incredible -5.1 percent Monday spurred on by the covid lockdown, blowback for sanctions related to supporting Russia and the natural ebb in global health. You can’t have the world’s second largest economy show signs of struggle and it not have serious ramifications for the global activity. For the Chinese Yuan, the implications carry serious weight in my view. Not only is the five-day rally for USDCNH the strongest since August 2015, it referenced a period that draws serious attention for a market swoon caused by questions over intentions of Chinese officials to draw competitive advantage via their exchange rate. This is far from a market-determined exchange rate, so authorities are letting the Chinese currency slide for a reason. It seems most probable that that reason is to offer some economic relief via cheap exports. But, how far will they ‘let’ this adjustment go? We will watch that debate unfold in real time, but we will be looking back on the decision and its impact. 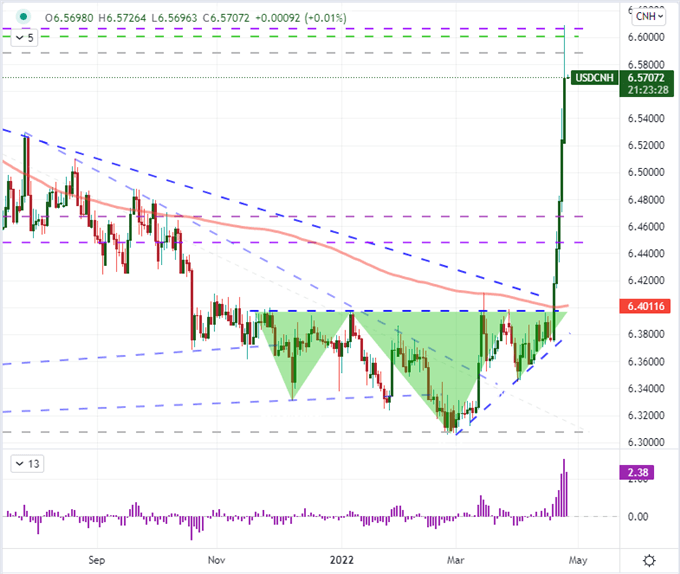 The Dollar Pairs that Punch Above Their Weight

Given the competing fundamental themes between risk trends, growth forecasts, interest rate differentials and more specific factors; it can be difficult to establish a bead a specific much less establish a perspective of risk appetite market-wide. That said, I will be looking to a particular market to help sort out the prioritization of speculative positioning itself. USDJPY is once again at the crossroads of so many prolific elements. The rate contrast between the Fed and BOJ could not be any more distinct – and the Bank of Japan is expected to update its policy mix and forecasts later this week. Another factor of importance is the sensitivity to risk appetite trends. Notably, most major Yen crosses have took a hit over the past two to four active trading session; but USDJPY has refused to mark a technical turn. That is likely in part due to relative monetary policy influence, but I believe the Dollar’s appeal as a haven-of-last-resort has helped it keep the hordes at the gates. That said, if we find risk trends unrelenting moving forward, a breakdown for USDJPY seems as reasonable as its major counterparts over the past week.

Chart of USDJPY Overlaid with EURJPY and GBPJPY (Daily) 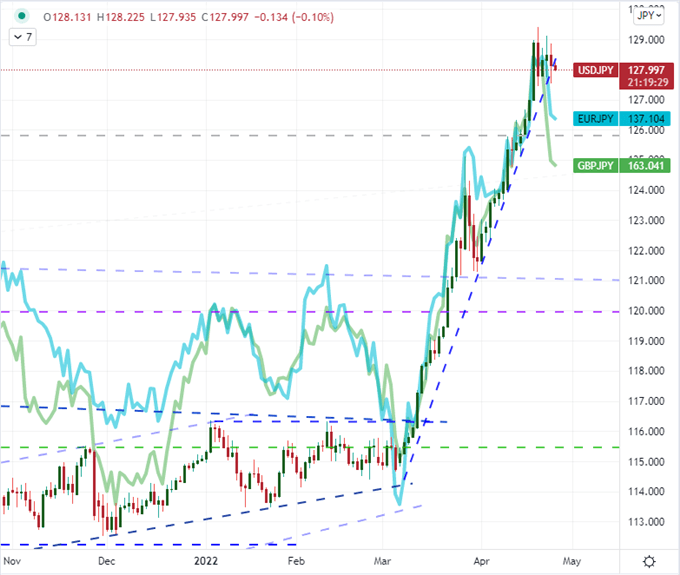 Another fundamental outlet that should not be overlook for its fundamental weight in the discussion moving forward is EURUSD. The -0.8 percent slide for the pair was a meaningful one given the liquidity of the cross. We have left the 1.08 break behind us, but there are further technical floors to trip up any hurdles that may throw themselves in the path of a bearish build up. First I will be watching the previous pandemic lows of March 2020; and below that, the January 2017 low will be a next objective. To see such a prominent player of the FX market progressing while the dominant themes (eg rate speculation) are on hiatus, I’m aware of the risk to volatility should the unexpected result. 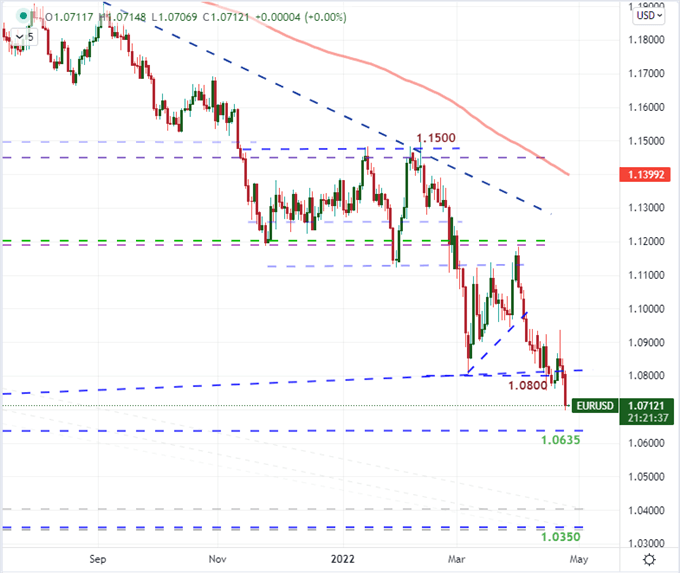