The ‘Risk’ Sentiment Heading Into the New Trading Week

The economic docket over the coming week has a few high profile offerings, but it isn’t a particularly-deep bench of top market movers. That said, there are a number of high profile and unresolved themes that can readily take over the speculative steering wheel with little advanced warning – from Fed rate speculation to seemingly all-but-ignored Chinese financial problems. I will maintain a ‘tactical’ perspective as conviction will likely remain an elusive perspective with so many overlapping and unpredictable charges for which we need to keep track. As we start to project the possible landmines ahead, it is worth taking stock of the risk appetite lean which we are sporting into the new period. This past week ended with the biggest two-day rally from the S&P 500 in five months, which carried the ‘market’ benchmark above its 50-day moving average. From this same benchmark, it looks like a return to a prevailing trend; but I am skeptical of the market’s willingness to entertain the skewed risk-reward of our current circumstances. As early warning signs of the ‘quality’ of risk trends, I’ll be monitoring: the Nasdaq-Dow ratio; junk bonds and carry trade. 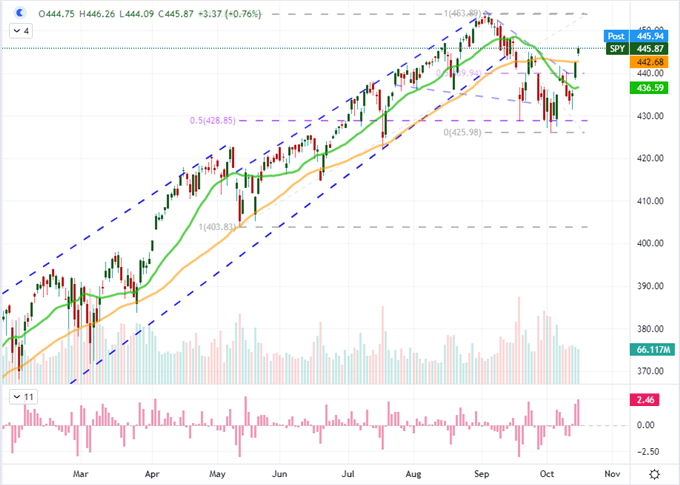 Interest Rate Speculation: A Systemic and US Theme

Among the various fundamental themes that are likely to be hashed out in the financial markets in the week ahead, the course of monetary policy will be a top concern of mine. From a broader perspective, there has been a notable shift in general monetary policy expectations through these past weeks. While much of the recent attention has been (deservedly) on the Fed forecast, there has been an unmistakable firming of rate expectations further across the spectrum. For event risk over the coming week, I’ll be watching the UK and Canadian inflation data due on Wednesday. Swaps have pushed up the expectations for the first Bank of England (BOE) rate hike from February to a possible December lift off. That would be an aggressive shift and a few officials (one of which is due to speak again this week) have attempted to cool the speculation. Yet, if inflation steps on the accelerator, the market may make its own calls. As for the Canadian Dollar and inflation views, the once top hawk a few months ago is in a better position to shake the market back into recognition. 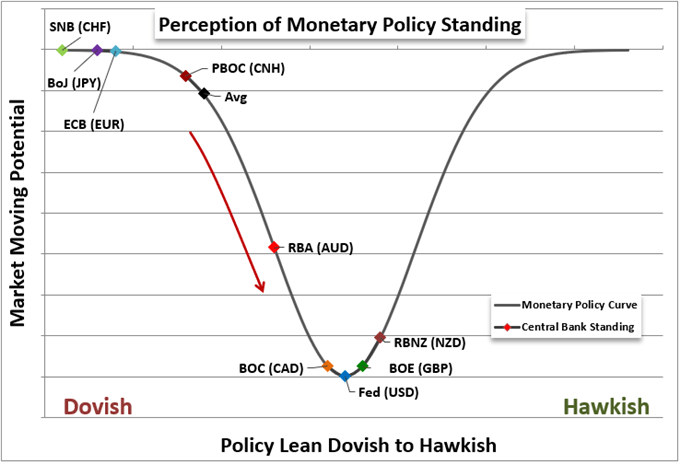 Though there are a few major central banks that I would consider more hawkish than the US-based Federal Reserve, there is little denying that the rate forecast for this group has seen the sharpest hawkish turn among the majors of late. Looking to Fed Funds futures, we find that the market is pricing in (hedging) 39 basis points worth of hikes through the coming year. From related swaps, we find the market is now confident of a September lift off from the FOMC and a June launch is considered a 50/50 proposition. That is a problem. The US central bank has laid out its timeline clearly to align to its forward guidance dedication. According to different statements these past months, the Fed is still unclear when to star the taper, it has vowed to taper slowly (recent minutes said $15 billion per month) and has said there would be a gap between the taper end and first rate hike. As it currently stands, the most aggressive scenario to fit within these boundaries would suggest a hike in September. Yet, what happens if inflation is unrelenting? They will need to break from their schedule, and that would translate into a surprise – which is the root of volatility. There is a history of the market forcing the Fed’s hand. That said, it is remarkable that the Dollar is still reticent of its relative yield appeal. 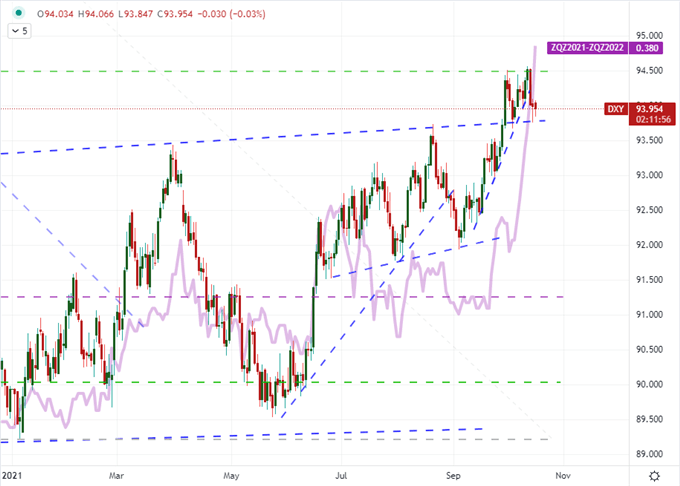 While the Greenback sorts out its sensitivity to interest rate forecasts, there remains other macro currents that can spillover to the broader sentiment causeway. One such fundamental theme that is still consumed more by the detached investors rather than the active traders is the unrelenting pressure from the energy market. US-based WTI crude extended its climb to fresh 7-year highs amid OPEC waffling on supplies, steady demand amid a ‘recovered’ global economy and a very prolific supply chain problem. While the future may be towards renewables, the world still runs on fossil fuels; so this advance is a distinct threat to the economic recovery so many entities contributed to in order to ward of the pandemic recession. What’s more, this is a very tangible inflation pressure. Though energy costs are considered a ‘volatile’ item in consumer and factory price measures, there is no denying its downstream pressure and subsequent rate hike contributions. 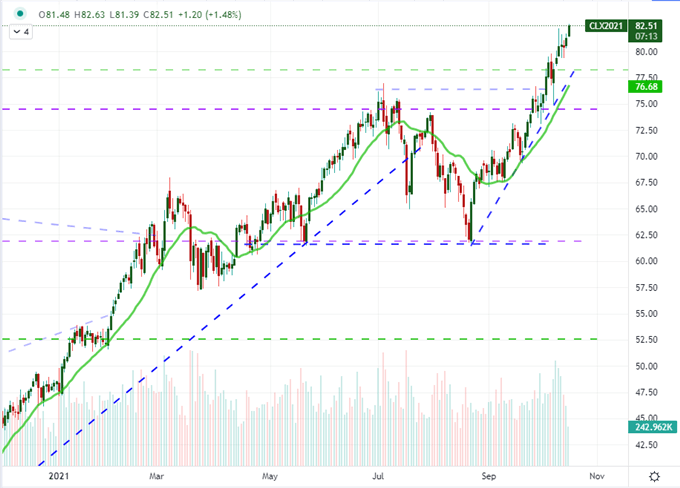 While the term ‘energy crisis’ is a common one of late, the systemic threat from China’s own localized troubles have all but receded to the backdrop. For many, it would seem that the situation was quietly resolved as there is no coverage to suggest otherwise. However, that ‘out of site, out of mind’ situation is a manufactured effort to sort out issues in the background so they don’t worsen in the meantime. That effort, however, is not exactly bullet proof. This past week, we were reminded about Evergrande’s predicament when the sale of its Hong Kong headquarters – attempting to raise $1.7 billion – fell through. What would the property developer’s shares be doing now if they were still trading on exchanges? What’s more, China is struggling under the rising commodity price pressures and growing pressure from the West over trade and Taiwan among other issues. Take note, the China 3Q GDP release is the first major event risk on tap this week. 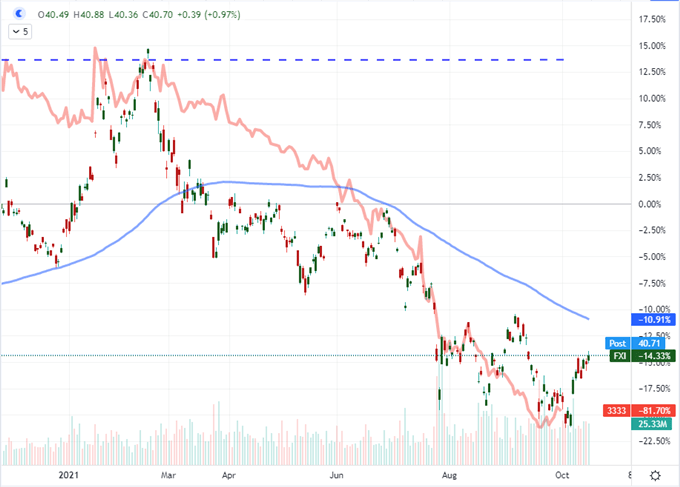 Top Events to Watch For the Coming Week

For those that live markets 24/7, Bitcoin’s buoyancy will be a matter to monitor over weekend trade - crypto markets are one of the very that see meaningful trade Saturday and Sunday. The impressive rally through Friday was a response to reports that the SEC (US Securities Exchange Commission) was likely to allow the first Bitcoin-backed ETF to begin trade Monday without issuing an objection. That would go a long way to further legitimize this still new asset type that has been increasingly battered by calls to regulate by the likes of the IMF and US Treasury. There is still a chance that the regulator pulls the plug on these derivatives which could find loaded ‘buy the rumor, sell the news’ scenario, but we could also see a record high as BITO starts to price on Monday. 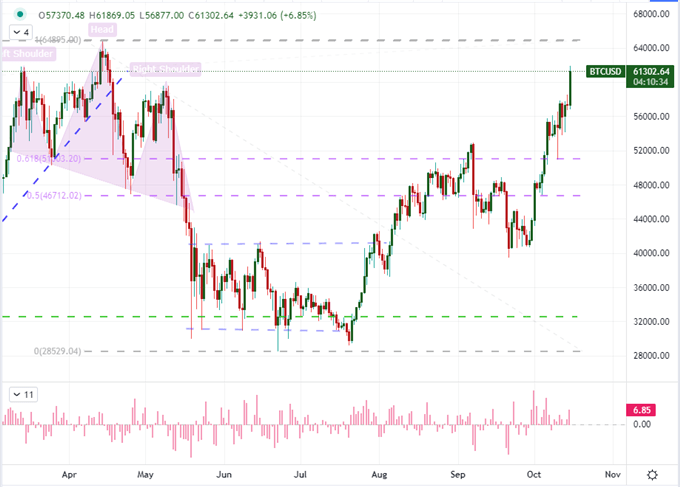 For scheduled event risk over the coming week, there are two lanes which fundamental traders can track: macro data and earnings. For the former, the New Zealand CPI reading can put the Kiwi back into the conversation with the Dollar and Sterling for rate speculation – the RBNZ has actually hiked its rate… Thematically, the Friday October PMIs from the major Western economies will give an important update on growth potential, while the targeted Turkish Central Bank rate decision will be consumed by global watchers who are mindful of the quickly deteriorating credibility of policy authorities. For earnings, Netflix is a dimming top lister as its FAANG star continues to fade. I will instead leverage my attention on Tesla and CSX reporting afterhours Wednesday. The EV maker is a more consistent favorite among the Millennial set while CSX speaks to growth and supply chain issues.

Calendar of Major Event Risk for the Week Ahead 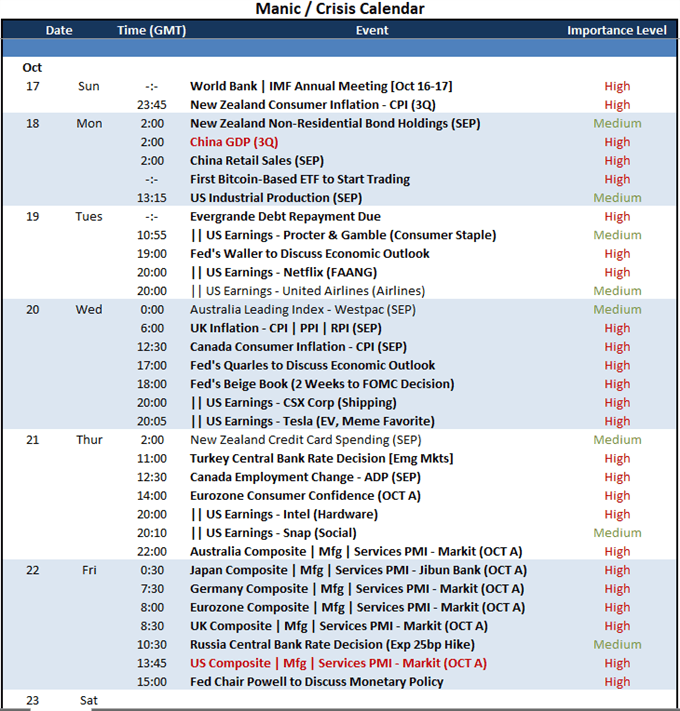