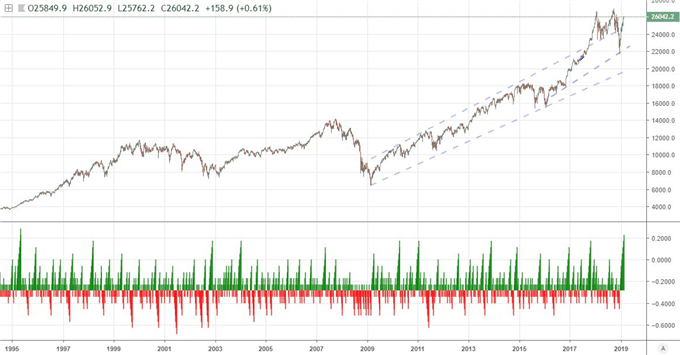 After a fairly quiet fundamental week, the markets were delivered a jolt of enthusiasm in the twilight hours of Friday's trading session. We have seen sentiment around the US-China trade war negotiations thaw slowly for the past few weeks, but genuine enthusiasm wasn't really proffered until the second half of the week. The suggestion that the restart of high level discussions on Thursday resulted in five MOUs (memorandums of understanding) spoke to progress through details that we simply have not seen at any other time over the past year. Friday afternoon, officials on both sides of the table went on a charm offensive with Trump and his trade team members voicing confidence that the favorable compromise was in sight with their Chinese counterparts reflecting the same.

If that is indeed the case, we would expect that next Friday's (March 1st) deadline to reach an agreement - or otherwise automatically increase tariffs on $200 billion in Chinese imports from 10 to 25 percent - will be obviated or pushed back. Though we are still lacking for clear details on the relationship, the confidence alone from officials should encourage speculators to stretch their climb...if they are indeed willing to continue on the basis of 'buying on a dip' rather than necessitating a true upgrade to the economic and financial outlook.

If markets are locked into a bullish setting, I would expect to see a strong charge in benchmarks like the Dow (closing out its longest stretch of weekly gains since 1995), emerging markets, carry trade and related assets through the opening session. If it fails to materialize despite the inspiring headlines, questions will start to rise as to why good news cannot promote follow through on an established trend.

Dollar and Pound Face the Heaviest Fundamental Winds This Week

A casual look at the economic docket for the coming week would indicate that we are in for a downpour of important economic event risk. There are a slew of key data prints, speeches, votes and deadlines on tap. While there is a wide range of locations from which these updates will come from, there are two regions for which the run is particularly heavy: the US and the UK. For the Dollar, the high level data is evenly distributed throughout the week. It starts with a nationwide activity reading from the Chicago Fed, shifts focus to consumer sentiment from Conference Board, touches upon a few important housing reports, includes the Fed's favorite PCE inflation update, but is anchored by Thursday's 4Q GDP. The broad growth reading has been delayed by the government shutdown and it will act as the crucial developed world and global baseline for a period that has clearly wavered in other areas across the globe.

While that particular indicator awaits us towards the end of the week, the first half of the period will find FX traders watching headlines from Fed Chairman Jerome Powell's testimony before Congress. This can shape growth expectations, monetary-fiscal policy beliefs and rate forecasts which have all deteriorated over the past months. As for the British Pound we have a similar cross-current mix of indicators, monetary policy and unique fundamental focus. The data on tap is the lowest concern. Even the scheduled Bank of England (BOE) members' remarks Monday and Tuesday will play an obvious second fiddle.

The focus is Wednesday's 'meaningful vote' in Parliament. This is the vote that is supposed to be one of the last few opportunities to settle on a Brexit deal before the March 29th split date. Headlines caused a stir Friday when it was reported some of the most senior members of Prime Minister May's government were calling for her to step down in May. Political instability is rarely encouraging, but this pressure may be a sign that the step down could be traded for support on a deal or delay. We will soon find out. 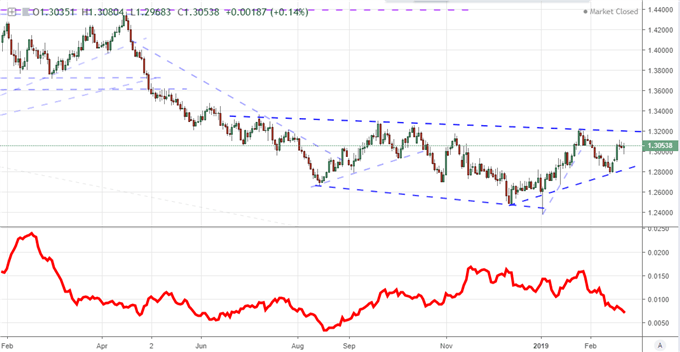 Outside of the US and British economic calendars, there is plenty more event risk to keep tabs on for targeted volatility in certain regions/assets; but traders should remain mindful of more systemic issues still on tap. Growth for example is a matter that runs far deeper than just the United States' delayed report. There are official 4Q figures due from some of the largest emerging market economies as well as Switzerland. Beyond that, more timely inference through sentiment surveys, PMIs and other details figures should be monitored closely because the market is highly attuned to developments.

Monetary policy is another traditional theme that is hitting a far deeper nerve. This past week, the Fed signaled its reaffirmed its shift to a dovish lean with discussions of capping its QE winddown, ECB members insinuated they were discussing the possibilities of more accommodation while Bank of Japan (BOJ) Governor Kuroda said further stimulus options would be investigated in the event they are necessary. There is relative FX influence here, but traders should also consider the implications for global speculative impact as stimulus has fueled much of the capital market reach over the past decade.

Further, we should weigh whether more stimulus will follow the equation of more speculation or whether it will instead spur concern over the forecast for the economy and efficacy of monetary policy as a prop. Gold in particular will be an important barometer in this important theme. We discuss all of this and more impacting the markets next week in this weekend Trading Video. 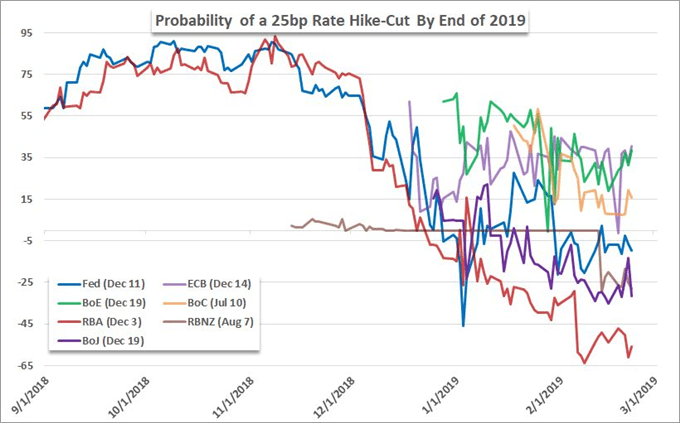