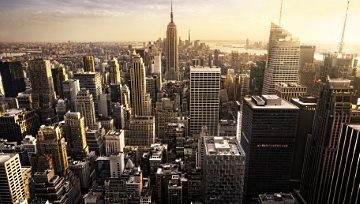 The Dollar, Yuan and Euro's Place at the Start of the Trade Wars

We have officially marked the start of a trade war. While we are still waiting for details on what countries fall under the United States' blanket tariff on steel and aluminum imports due Friday, President Trump decided to cue a fight on trade Thursday with the announcement of an explicit tariff on $60 billion (an aide said $50 billion before him) of Chinese goods. This move follows an investigation into the claims that China was stealing intellectual property for its own benefit. The President had also called on the country to make an immediate reduction of $100 billion in its own deficit with the trade partner. It is very likely that China will also be on the hook for the metal tariffs, or it will be used as a negotiation point. For those that would look for a silver lining on the day, it was announced by US Trade Representative Robert Lighthizer that a number of exemptions to the forthcoming steel and aluminum import taxes including the Euro-area, Australia, South Korea and of course Canada and Mexico among others. If the US imposed the tariff on the EU, we would have seen a more certain and immediate path to global crisis. However, this far from pulls us off course for a crash.

A trade war requires reciprocation. Should countries the target of burdensome trade restrictions not retaliate, the economic detriment is merely absorbed by the target of the taxes. When the countries trade sanctions and escalate along the way, the collective economic and financial impact grows exponentially large and destabilizing. The United States and China are the two largest individual economies in the world. There is little hope to avoiding being build into their fused orbits if they are engaging in policies that hurt one another. Some aspects of the spillover can be quite complicated through supply chain or ancillary relationships, but the most accessible fallout is the cinch in speculative capital flow. The amount of foreign capital that had poured into China seeking the recession-proof and high-yield return in the Asian giant would suddenly look very risk - especially with the shift back towards capital controls. Meanwhile, the sizable investment the world makes in the US will look much riskier than the near-record high equities market would suggest. It comes as little surprise that the Dow, S&P 500 and Nasdaq all gapped lower on the open. The move through the close was far more troubling, especially when it came with progress like that from the Dow 30 tentatively breaking critical support.

Where does capital flow in this specific version of risk aversion? That is crucial question if you are planning to evaluate your havens or generally take advantage of the redistribution of capital. It is worth noting that the tight congestion for USD/CNH leading up to Thursday's news has not been breached. That is because it is not exactly clear how capital will eventually move between these two superpowers. In part, it is a function of uncertainty over how retaliation will play out. Yet, it also generally not clear how capital will repatriate whether through speculative, economic of government channels. Further, the Dollar is not a clear safe haven when it is at the center of this most recent phase of global belligerence. If we get to full tilt liquidation, sure. However, in the meantime, USD/JPY clearly signals that there is risk in the Greenback. Where does capital go when there is a move away from the benchmark currency? Cryptocurrency adopters believe Bitcoin, but volatility and illiquidity of its scale are more risk than harbor - and we saw that reflected in its price action. Gold is arguably a better candidate, but we did not see it jump on the day. I would keep a close eye on it however. If there is a wide boycott of the Dollar by speculators, look to the Euro. As the second most liquid currency, its appeal is clear. I'm watching EUR/USD between 1.2600 and 1.2175. 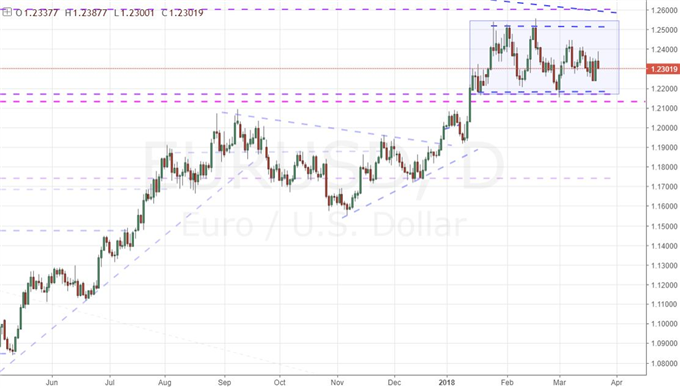 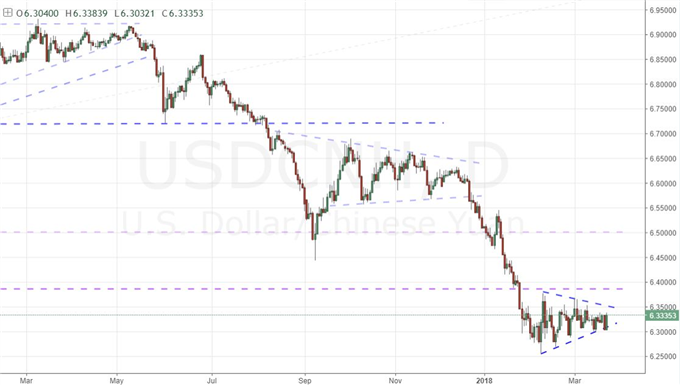 Pound and Brexit, Aussie and Trade, Loonie and Inflation

It will be difficult to escape the pull of the US-China standoff and its subsequent impact on broad risk trends. However, there are some areas of the market that can form unique moves until the current for global capital is more defined. From the Pound, we saw little reaction to the BoE rate decision this past session even though a split vote seems to rise the possibility of a hike as soon as the next meeting. Brexit is too overbearing hear; and against that them, the Pound is quite rich. The Aussie Dollar suffered a wide tumble this past session, which is remarkable given the generally good showing in jobs data as well as the exemption they received for the US metals tariffs. Yet, given its ties to China, there is more complexity here. We will see what that means for Aussie pairs that are stretched (AUD/JPY, EUR/AUD) or have appealing technicals (AUD/CAD and AUD/USD). Then there is the Canadian Dollar. Also with an exemption for the US, we may turn to other considerations like the upcoming inflation figure's impact on the BoC decisions moving forward. We discuss all of this and more in today's Trading Video.