The price of crude oil continues to inch higher as risk assets extend gains recorded so far this week owing to recent US-China trade war optimism. Top negotiators from Washington and Beijing have been discussing their ongoing trade spat this week and the latest headlines are pointing to substantial progress being made between the world’s two largest economies.

Speculation has swirled that the US and China could be inching closer toward a partial deal that may potentially include a currency pact between the nations. Ultimately, traders are likely hoping for President Trump to remove or further postpone a scheduled 5% additional tariff hike on $250 billion of Chinese goods set to take effect on October 15 with other goods also targeted for a tariff hike in December. 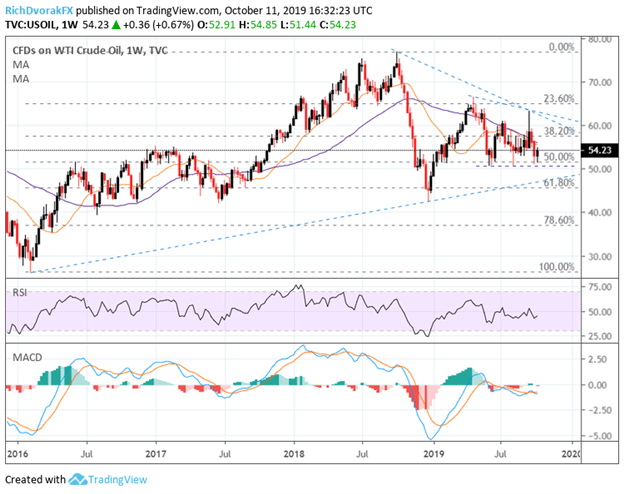 Also, I recently noted that crude oil price outlook brightened on a firm NFP report, which helped the commodity find support around a major technical level. Nevertheless, crude oil price outlook hinges predominantly on the ebb and flow of US-China trade war developments. This is due to the material impact that lingering trade war uncertainty has had on global GDP growth and prospects for future economic activity. 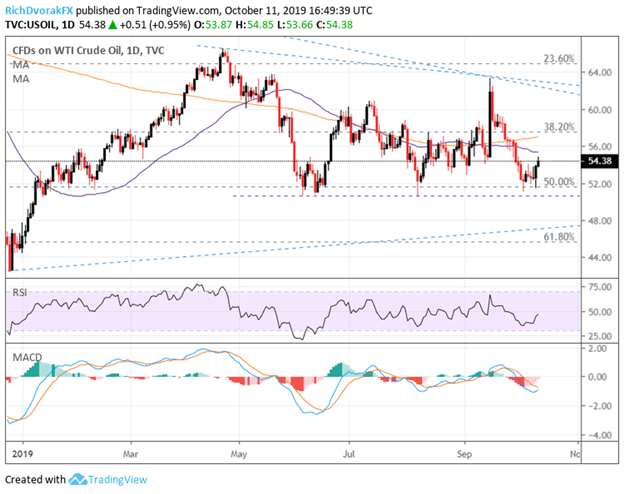 An intermittent floor around the 51.00-52.00 handles underpinned by the swing lows back in June, August and earlier this month will look to continue serving as a potential area of technical support for crude oil prices. The 50-day and 200-day simple moving averages stands to serve as a nearside obstacle for crude oil bulls before confluent resistance highlighted by the 38.2% Fibonacci retracement level of the commodity’s trading range since 2016 comes into play.

If Donald Trump and Liu He fail to find common ground after this round of trade talks, a breach of the aforementioned support level could open up the door for crude oil bears to target the uptrend support line extended from the February 2016 and December 2018 swing lows. On the other hand, if trade talks make positive progress and the price of crude oil could eclipse nearside resistance previously noted, bulls could then look higher to the downtrend resistance line that connects the April 23 and September 16 intraday swing highs.