As Jackson Hole’s famous Yellen speech came and went, the price of WTI was volatile but ended up nearly where it began the trading day near $47/bbl. The surprise of Friday’s session came when Janet Yellen’s perceived dovishness was rebranded by Federal Reserve Vice Chairman Stanley Fischer who said that Yellen’s remarks leave open the possibility of a September interest-rate hike. This comment strengthened the US Dollar and brought Oil below its intraday highs of $43.45/bbl.

Absent a late-Friday rally, Oil could be on its way to the first weekly decline in four weeks. The market still seems uncertain as to the long-term direction of the US Dollar as UST 2yr Yields pushed above the 80bp level that seems indicative of a credible rate hike shortly. However, less than 1% for two-year yields in treasuries favor a lower for longer than previously perceived, which the Oil market could easily gain should demand rise to the levels prediction.

In addition to future demand growth, positive signs of an OPEC agreement continue to emerge. Iran’s Oil Minister said on Friday that Tehran would work together with OPEC to stability the market.

Another positive sign comes from acquisitions building in the shale basins where extraction is cheaper, and efficient firms can stay profitable in the current environment. We’ve begun to see M&A is on the rise as Wood Mackenzie noted that there had been more than $11 Billion in July. Buyers have been both public and private firms like Exxon Mobil Corp. as well as Blackstone Energy Partners LP.

There a lot of encouraging developments in the Oil market that could accelerate the price appreciation of Crude if the US Dollar weakness continues. For more definitive levels, let’s go to the charts.

The chart above has consistently provided a helpful framing price action in WTI Crude Oil. After failing at the top channel in June, the price quickly dropped down to a pre-identified zone provided by the median line and the Fibonacci Retracement levels in focus between $41.85-$35.22/bbl.

As you can see, the price has moved right back up to formidable resistance that is provided by the Channel Top and the price is now resting at the top of the Weekly Ichimoku Cloud. A break above this Andrew’s Pitchfork resistance (Red) could provide real excitement as it would be the first time since summer of 2014 that we have seen what looks to be a sustainable bullish break for Crude Oil that could keep the price comfortably above the $50/bbl level for a while.

You can also see on the chart what looks to be the framework of a Bullish Head & Shoulder’s Pattern. A legitimate breakout would be validated by a break of the price of Crude Oil above $51.64/bbl. If the price broke out and sustained above the highlighted range near ~$50/bbl, we would favor a move to $66.16, which would be 61.8% extension of the Head & Shoulder’s range and $75.60/bbl, a 100% extension, and traditional Head & Shoulder’s target.

A breakout above the bearish channel (red) that would be followed by the price holding above $50/bbl would be an incredibly bullish sign for the Crude Oil Market. Such a development would likely be followed by an increase in aggressive acquisitions in the Oil market with first that have weak balance sheets. Resistance should be respected until broken, but if broken, it may be foolish to fight what could be the strongest move higher yet in 2016. 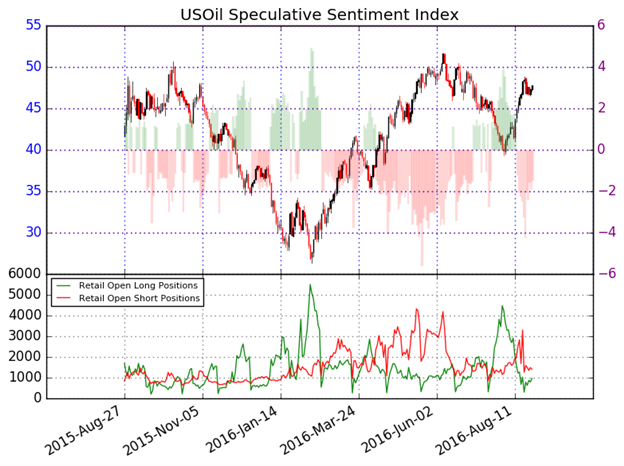 We use our SSI as a contrarian indicator to price action, and the fact that the majority of traders are short gives a signal that the USOil may continue higher. The trading crowd has grown less net-short from yesterday and last week. The combination of current sentiment and recent changes gives a further mixed trading bias.