Despite continual improvements in the Canadian economy, the Canadian Dollar continues to fall to the USD. In the Canadian Dollar’s defense, most currencies have been falling to the USD since the Federal Reserve presidents, and chairwoman Yellen spoke last week to help convince the market that hikes would begin at the March 15 FOMC meeting. Over the last two weeks, the implied probability of an FOMC rate hike has surged from ~33% on February 22 to 98%-implied probability as of Tuesday.

Canada posting its third straight trade surplus was not enough to turn the trend in USD/CAD, which as had short-term momentum decidedly higher. Much of the credit to three straight trade surpluses have gone to energy price stabilization as well as other commodity exports to emerging markets, which have been playing a larger role in Canada’s global trade relationship during the energy crash of 2014/2015.

The momentum of positive data from Canada will be tested for continuation on Friday when February employment data will be released at the same time as US employment data, also known as non-farm payrolls. From the US perspective, the highimplied probability of tightening from the Fed provides a view that risk is becoming asymmetric meaning that bad news would hurt the USD more than the good news would boost USD.

The charts show a clean move to the top-half of a channel that has frames price action very well. The spot price of 1.3415 sits above the March 6 and 2 low support at 1.3365 and 1.3324 respectively. The resistance in focus in the January 4 high of 1.3457 has a majority of traders attention as the daily RSI(5) sits in overbought territory.

While risks do appear asymmetric on the USD, it is worth noting the S/W relationship at play right now that has USD as the strongest G8 currency on a relative basis when comparing on a 240-minute chart with a 200-DMA filter. The strength of the USD should be provided the benefit of the doubt given the widening rate differentials that could continue to keep buyers jumping in on any dips in USD/CAD.

A pull-back to the Ichimoku cloud as new-found support would likely be a buying opportunity for traders with a focus on a continual move higher toward the January 4 high. The channel above is drawn off the May extremes with internal lines at the 23.6%, 50%, & 78.6% point of the initial range with the same slope as the channel. The top of the prior range is the December 28 high of 1.3598, which would also be the beginning of the top quartile in the price range. The top quartile will be an appropriate focus if the ST momentum remains bullish and 2yr US/CA yield differential remain wide. The top of the channel comes in near 1.3750.

A reversal below the stellar support of 1.3150 is needed to turn the technical view from neutral to bearish from my standpoint. 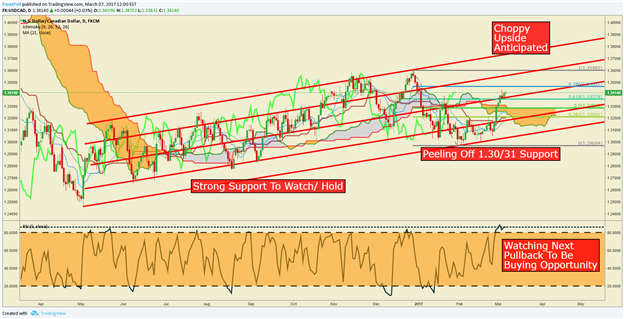