FTSE – A Lot of Resistance, Some Support, a Pound of Impact

A week ago, when we were discussing the FTSE it was noted that the volatile price action around resistance gave shorts the upper-hand. But this would likely only be the case for a little while as big support arrived not far below in the 7315/290 vicinity, of which the zone was only breached by a couple of points before turning around this week. It was thoroughly tested twice, once on Friday and again yesterday. Solid support, but…

Overall, the trend since the high a month-ago remains postured bearishly with a series of lower-lows and lower-highs in place, however; there is enough solid footing for the market to hold onto that it now leaves shorts with limited ‘open space’ to operate without running the risk of another bounce. It’s a tricky spot at the moment, but it looks likely there will still be pressure on the footsie for now, and as such, rallies are likely to face sellers.

Resistance arrives from around 7370 up to 7400-ish. This area consists of the bottoms created during the swing-low in November, underside of the recently broken December 2016 trend-line, 200-day MA, and trend-line off the record high. Indeed, a lot of resistance to contend with. Support clocks in right around 7290, and below there the trend-line extending from April beneath the September low, roughly 7255.

Muddying the waters further are Brexit talks through Friday, when the UK is to give a recommendation to the EU council. Pound volatility is set to impact UK stocks, especially the currency-sensitive FTSE 100 with its largely multi-national make-up (FTSE/GBPUSD 1-mo correlation = -63%). For now, we’ll take a neutral stance and come back when the picture presents a better-looking scenario.

Struggling with confidence? Check out this guide for ideas on Building Confidence in Trading 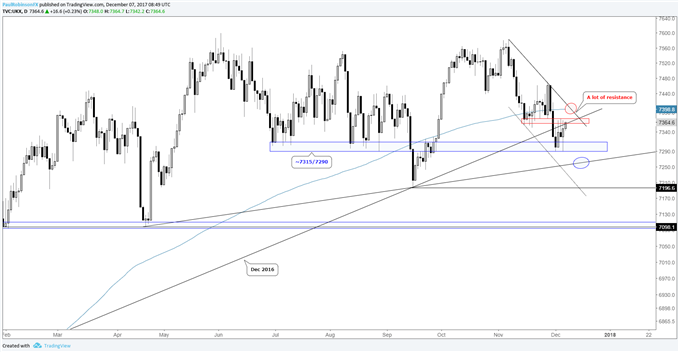