FTSE 100 Caught Between the Lines, BoE on Thursday

Last week, the FTSE 100 started off edging lower from record highs, but then a rush of a selling came in on Thursday and pushed the index down below the first area of support in the 7330/00 vicinity, almost nearing lower parallel support before seeing a solid turnaround on the day. We made note of similar price action in the S&P 500 (mini short-term capitulation-like bottom).

Moving on to the current situation, the Thursday turnaround day low of 7263 along with the lower parallel will be our first focus as support. A decline below those levels and the intermediate bullish structure of higher highs and higher lows will come into question despite support (June t-lines) coming in not far below.

Operating off the assumption the recent low holds, the footsie has resistance very nearby – mostly in the form of top-side trend-lines. The first one in the vicinity is a long-term trend-line connecting the 2013, 2015, and January peaks (edged slightly above to start the month). Arriving very quickly beyond the long-term line of resistance (roughly 7370) lies the record high of 7394/January top-side trend-line. It’s once the market can clear above (let’s call it >7400) with vigor that the market can find a little room to run before finding new top-side resistance by way of the February to current trend-line and a pair of top-side trend-lines extending higher from 2016. Given the lines slope higher with the market they are considered minor in degree, but nonetheless can be enough to put in meaningful swing highs. Watching how price action behaves upon arrival of these levels (if they are met) will help provide clues as to how the market will respond.

Heads up: On Wednesday, the FOMC meets and is expected to raise rates, so it will be about the Fed’s language as it most often times is. Any U.S. volatility could spill over into early-day trade on Thursday, which brings us to the BoE meeting that day. Expectations on Thursday are for no changes to monetary policy by the the U.K. central bank. ‘Brexit’ discussions at this time are the primary focus, with the U.K. government planning to trigger Article 50 by the end of March. 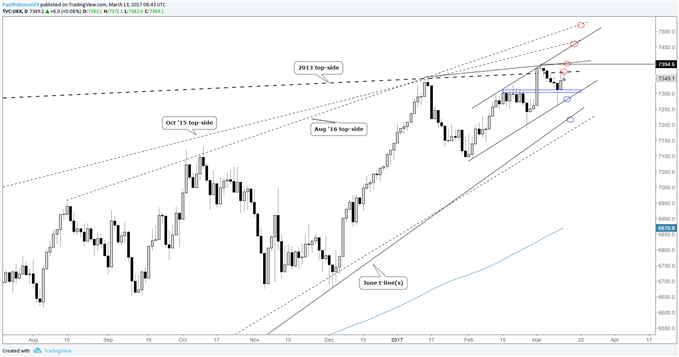