British Pound Bogged Down By Brexit and Fears of Economic Weakness 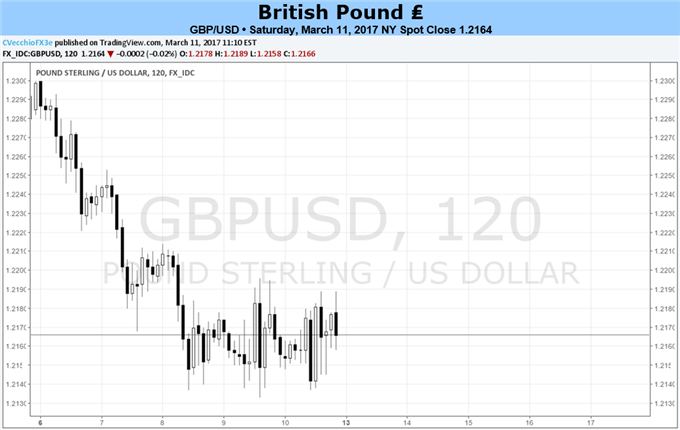 - UK data has disappointed of late; Citi Economic Surprise Index down over the past month.

- Bank of England highly unlikely to alter its ultra-accommodative policy stance on Thursday.

- Labor market one crumb of comfort amid disappointing data elsewhere.

The British Pound has been bogged down by fears of economic weakness, Brexit uncertainty, and of recent, the strength of the US Dollar and the Euro. Rising Fed rate hike expectations for March and a less dovish ECB are doing the Sterling no favors, as the BOE remains in an ultra-accommodative policy stance. The British Poundclosed out the week dropping for a sixth day versus the Euro, its worse run since August, and had a second straight week of declines against the Greenback.

UK data have disappointed of late, highlighting fears that the negative effect of the Brexit decision is beginning to bite. House price data this week show that buyer demand growth stalled in February. Before that, on Tuesday, UK retail sales softened in February, according to data from the British Retail Consortium, with non-food sales falling on an annual basis for the first time since 2011 in the three months to the end of February: more evidence that the hit to consumer spending growth from higher inflation caused by Sterling’s Brexit-related slump is starting to be felt on the British high street.

Wednesday’s budget statement did little to alter the headwinds facing the UK economy. Data on Friday revealed the UK’s industrial production and manufacturing output contracted in January, as expected, after the broader industrial measure hit a six-year high at the end of last year. Overall, the Citi Economic Surprise Index for the UK has slipped from +101.3 on February 15 to +80 by the week’s end.

In the coming quarters, the fall in the manufacturing PMI to 54.6 in February from 55.7 in January suggests that the strong growth in manufacturing in Q4’16 is unlikely to be repeated, with some economists warning that the UK is entering “stagflation,” a period where the economy faces high inflation and low growth, a veritable policy nightmare.

With that said, the labour market is holding up well, and for now any slowdown in activity looks modest. We’ll get more info on that front next week with the release of labour market data Wednesday. Apart from the jobless claims figures, next week there’s little in the way of fundamental data that could help prop up the ailing Pound. The Bank of England has its March policy meeting on Thursday, but it is highly unlikely to alter its ultra-accommodative policy stance and forecast to keep rates at 0.25%.

Brexit discussions can also be expected to weigh further on Sterling. The UK government plans to trigger Article 50 by the end of March, and the lack of any further details from PM Theresa May and Brexit Minister David Davis continues to weigh. The House of Lords’ vote to ensure Parliament has the final say on any UK-EU agreement has subtly increased the chances of a ‘hard Brexit’ once the two-year negotiating window closes; the May government is expected to trigger Article 50 by the end of this month.

Piggybacking on the Brexit headlines, news emerged this past week that there could also be the prospect of another Scottish referendum. Scotland’s First Minister Nicola Sturgeon claims autumn 2018, just months before the UK is expected to leave the EU, would be a "common sense time" to hold another independence vote. Scotland voted 62% in favor of ‘Remain,’ while the UK on the whole 52% in favor of ‘Leave.’ The outlook for the British Pound appears to remain quite gloomy for the foreseeable future. -OM