DAX Technical Analysis: Volatile Range Persists, to Resolve Up or Down?

Struggling? You’re not alone. Find out 4 ways which can help you start Building Confidence in Trading.

On Friday, it looked as though the DAX was going to make a break for it and finally climb out of the nearly one-month-long trading range. No such luck as by the end of the session a key-reversal bar was carved out, hinting at a bearish tone heading into this week.

The area which makes up the range is receiving quite a bit of attention in the short-term despite the long-term nature of its culprit. The trend-lines extending over from 2000 and 2015 have made the area very sticky. This was first the case back in October, although the range was considerably narrower, and now the level of indecision couldn’t be much higher. The range has been unusually volatile, but should we see one soon a resolution it may lead to sustained follow-through as market participants jump aboard the breakout.

At this point the direction of the break is anyone’s guess, however; it looks more likely the DAX will move in-line with the general trend higher. But rather than anticipate the breakout, it’s a more prudent approach to wait for a strong daily close outside of the range before drawing conclusions. A run higher out of the range will quickly bring the record high at 13525 into view, while a break on the downside will have attention focused on 12676 and the June 2016 trend-line which is in confluence with the 200-day MA. 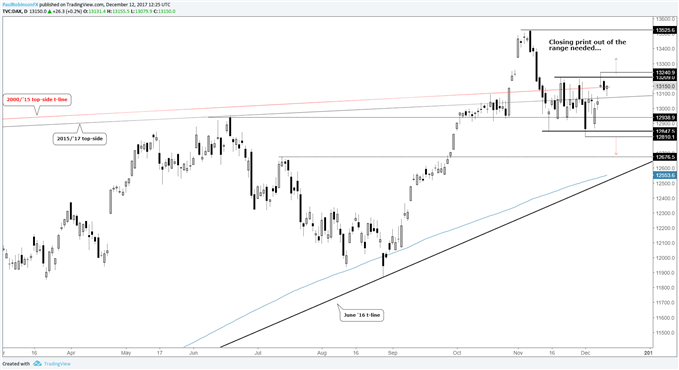