In our last article, we looked at the continued range in GBP/USD that developed shortly after the ‘flash crash’ in the British Pound. This range was largely governed by the competing forces of the continued dovish stance of the BoE with the rising tide of inflation being seen in the economy. As more evidence of stronger inflation presented itself, Cable caught bids to the upper-portion of that range; and then when various members of the Bank of England opined on the matter, prices had a tendency to drive back-down as it didn’t appear that the bank was in any rush to tighten policy.

And then a curveball showed up…

Yesterday morning, Prime Minister Theresa May announced that general elections would be held early, on June 8th of this year. The move was largely applauded as cogent political strategy in the effort of gaining a Conservative super majority to push through Brexit negotiations. And this very much may be the case; but given the volatility seen in global elections over the past year, it would seem that a bit of reservation should be due before any long-term prognostications are built based on early polling numbers.

The immediate impact to the British Pound was a quick run of strength that finally sent price action above the 1.2775-level. Prices continued to run in a rather aggressive fashion, all the way up to 1.2903 before sellers came-in. This led many outlets to claim that PM May’s announcement was a ‘game-changer’; and again, this very much may be the case but for traders putting money on the line, this is a leap-of-faith that shouldn’t yet be initiated until more information presents itself. 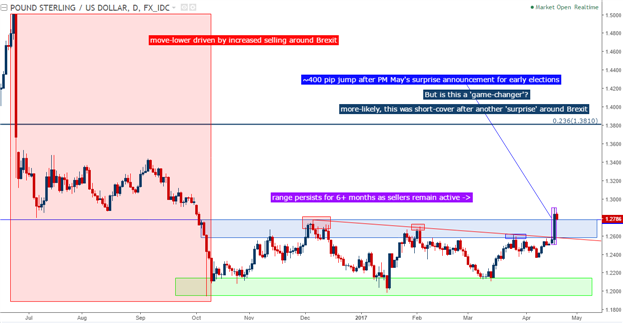 More likely, this surprise announcement added uncertainty to an already brutally uncertain future for the U.K., and investors responded as they generally do to additional uncertainty: By closing positions and ‘tightening up’ risk outlay. The degree of strength seen in Cable after yesterday’s announcement very much alludes to this being at least partly a factor to the Cable’s run-higher.

Given that yesterday’s move was at least partially-driven by short cover after another surprise development in the Brexit-saga, this leaves Cable in a fairly precarious position. Short-term price action remains bullish as we’re seeing some element of support show-up around that prior high of 1.2775; but the question remains as to whether yesterday’s announcement is a true driver for a tidal wave of change in GBP-price action.

Nonetheless, price is always ‘right’, and at this stage traders need to at least be open to the idea of the potential for bullish continuation in Cable. For those looking to or open to adding GBP-exposure after yesterday’s burst of strength, the prior price action swings from the February high (1.2706) and the March high (1.2616) can be helpful for seeking out deeper support or for setting risk levels. 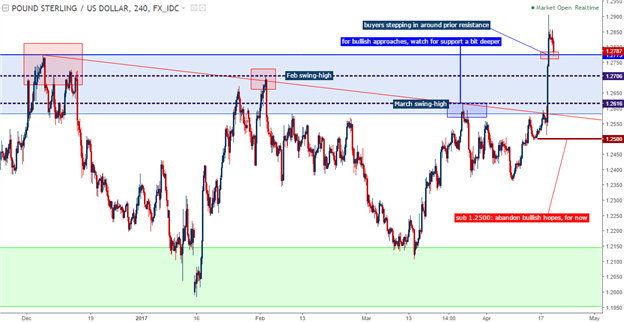 As we’ve been discussing for the better part of the past six months, there is very much a recipe for Cable strength brewing right now. But that’s largely because of the already significant drop seen in GBP after the Brexit referendum. After the ‘sharp repricing’ in the British Pound after Brexit, inflation has begun to tick-higher, and this has created the thought that the Bank of England may move away from their post-Brexit accommodation because a) the brutal slowdown they were expecting never really materialized and b) staying on that unnecessary accommodation only opened up more risk on the inflationary front that would, eventually, force the BoE into action.

To be sure, many bullish trends begin as ‘short squeezes’. But until we have more information behind this move, we won’t be able to decipher if this does, in fact, carry potential for further gains.

Until then, trade the chart. And if you don’t like what the chart is showing (if you’re bearish on GBP), simply move over to another chart or wait until that market sets up more appropriately for you.