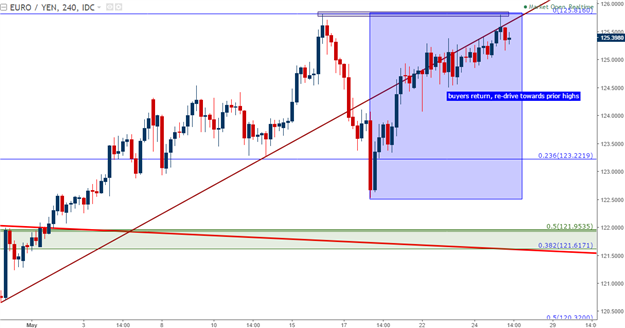 In our last article, we looked at the retracement of the previously overbought bullish trend in EUR/JPY. After the pair had shown indications of ‘topping out’ in the week prior, sellers finally grasped some element of control in EUR/JPY as a move of strength in the Yen drove through multiple support levels. But as we warned, the longer-term formation here was still bullish in nature. And given the potential for continuation in themes of Euro-strength and Yen-weakness, the bid side of the pair could remain favored if support began to show on longer-term charts.

That support did show up, and buyers returned to perch EUR/JPY right back towards those previous highs.

But as this morning’s price action neared that prior swing-high, something interesting happened: Bulls lost motivation, and sellers began to show-up with a bit more strength, pulling shorter-term price action lower. 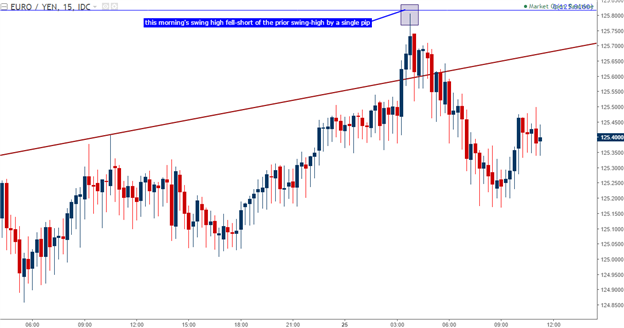 The fact that bulls stopped short of those prior highs by a single pip may be deductively telling us something: While the trend in EUR/JPY is decidedly bullish, prices may still be a bit overbought. While prior bullish trends in USD/JPY and GBP/JPY have put in deeper retracements, continued strength in the Euro has kept a larger sell-off or pullback at bay. Meaning that there are likely far more longer-term bullish positions still being held in EUR/JPY as the prior retracement was shallower than what was seen in other JPY-pairs.

Moving forward, traders would want to acknowledge the continued strength here while exuding some element of caution given the potential for the pair being at a turning point. If EUR/JPY finally breaks above that prior swing-high at 125.82, bullish continuation can be in order by looking to catch the next ‘higher-low’ in the pair. But - if we do not break above that prior high, meaning that this morning’s swing was a ‘lower-high’ by a single pip, the fact that bulls got shy as we approached that prior swing may be noteworthy. If prior swing support around 124.50 gets taken out after bulls were unable to over-take this prior high, the door could be re-opened to short-term bearish momentum strategies. 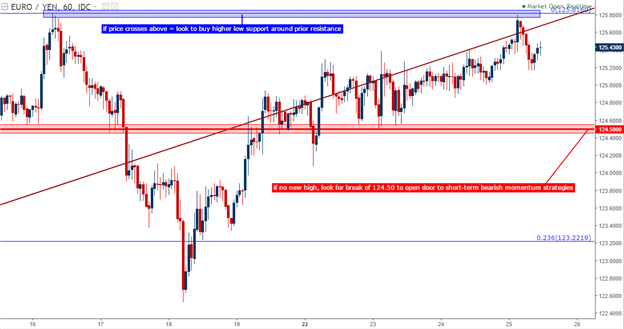