The sideways to choppy move higher in USDJPY over the past several months has been confusing to track in real time. That type of price action is typically indicative of a corrective wave. It is best to wait for clarity in levels before proceeding to trade them.

How does Elliott Wave Theory help us identify the reversal on USDJPY Chart?

The trend higher which began in March 2018 appears as a clear zigzag pattern labeled ((a))-((b))-((c)) where ((b)) is a triangle pattern. We are confident this is the higher probability pattern as the May to July 2018 wave terminated within the 1.618 level (purple arrow). This is a common bound for the second wave of a triangle. Once wave ((b)) finished, USDJPY jumped quickly to new highs, which is another common characteristic of post-triangle behavior.

The jump higher out of the triangle is labeled wave ((c)) and traveled to .618 times the length of wave ((a))…this is a common wave relationship between alternating waves in a zigzag.

As a result, we have several wave relationships illustrating the zigzag that began in March is finished. This zigzag could be counted as wave ‘D’ of a larger Elliott wave triangle that began from the 2015 high. Therefore, we anticipate wave ‘E’ to fall below 110 and possibly towards 107. For the triangle pattern to remain valid, wave ‘E’ would need to terminate above the March 2018 low of 104.63.

An interesting observation from a longer-term chart is that USDJPY appears to be respecting a 10-month cycle. In the chart below, we can see how approximately every 10 months since 2014, USDJPY establishes a tradeable low. Timing cycles are tricky and will phase in and out of favor without any notice. Once they become obvious use that as a warning of the cycle about to phase out.

In this case, as the waves hint towards downward price action for this final leg of a three-year triangle, we will be watching closely for an important bottom to form in the coming months. Perhaps December 2018 is that period…only time will tell but we will give priority to the Elliott wave structure and price action. 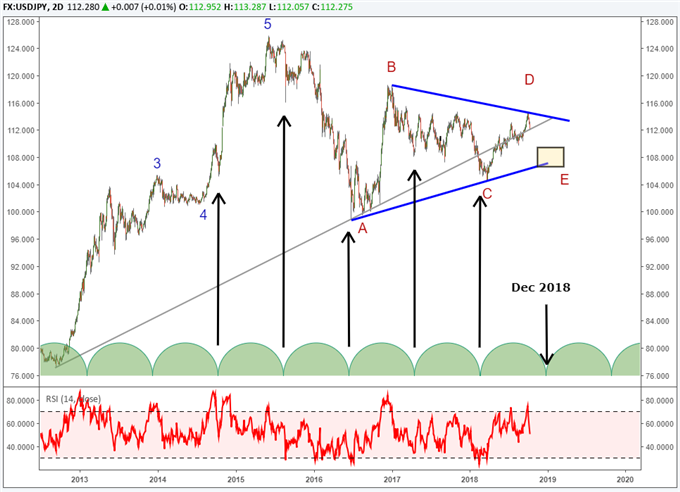