The Australian Dollar remained under pressure despite Australian month-on-month retail sales rising by 1.8% for January, against 0.3% expected and a prior number of -4.4%.

The solid number is likely a result of the further easing of restrictions as the nation emerges from the Covid-19 pandemic.

Private credit data also hit the wires, with the month-on-month number coming in at 0.6% for January, against 0.7% forecast and the previous print of -4.4%.

However, the market is focused on the unfolding events around the military conflict in Ukraine.

The fallout of excluding Russia from the international payment system, SWIFT, has yet to be fully revealed, but there are reports emerging that several Russian banks could fail in the coming days.

Other sanctions appear to be likely to be announced in the days ahead. This uncertainty could see the Aussie subject to higher than usual volatility.

In periods of uncertainty the Australian Dollar can be exposed as investors seek so called “safe haven” assets, such as the US Dollar.

The Japanese Yen may also benefit in this risk-off environment and the AUD/JPY cross rate might be worth watching to gauge market sentiment.

The RBA will meet on Tuesday and are expected to keep rates on hold. While the asset purchase program was deleted at the last meeting, the market will be focused on any announcement regarding the future of the assets they already own.

The general consensus is that they are likely to let these assets mature, rather than sell them back to the market.

Fourth quarter Australian GDP data is due out on Wednesday, the market is anticipating 3% growth for the period.

It then retreated back below them to then create a shooting star candlestick pattern which could signal a reversal.

The 21-day SMA could also provide support, a close below it may indicate bearish momentum. 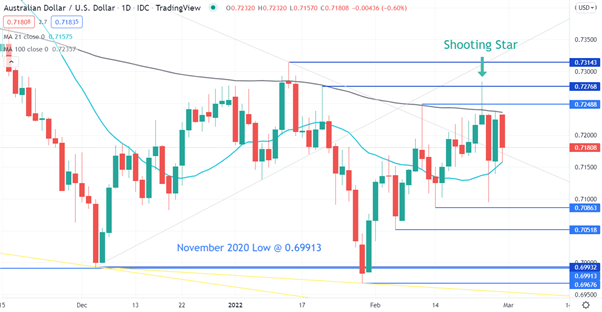