Late February’s rise in US Treasury bond yields has had knock-on effects across financial markets. Longer-term yields in other developed countries rose in a similar pattern and equity markets moved to reflect the increasing risk free rate of return.

The S&P 500 has failed to reclaim the levels above 3,900 set just before the rise in yields triggered an acceleration in market volatility. Wednesday’s weak prints in ISM services activity and ADP employment numbers for February drove the index slightly lower and could continue to pose another headwind to equities, alongside further moves higher in Treasury yields.After some early-week calm, Treasury yields appear to be moving notably higher on Wednesday. The yield on the US 10yr is nearing the 1.50% level again, encroaching on the estimated S&P 500 dividend yield. 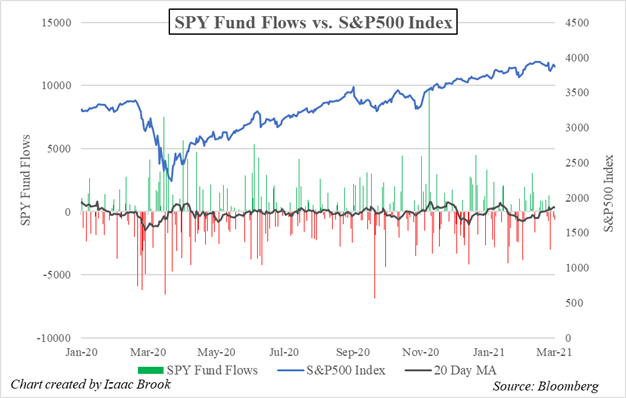 The SPY ETF, which tracks the S&P 500, has been mixed in the new year. Since January 1, the ETF has seen around $10 billion in net outflows. Market volatility on February 25th saw some dip-buying activity in the ETF following three days of outflows, and the 20-day average of flows continues to trend higher.

Mixed economic data has also threatened the rally in WTI Crude Oil. WTI has boomed in 2021, rising from 48.00 to a high above 63.00 on February 25th. Since then the oil rally has struggled, with the price of WTI Crude falling to consolidate below the 61.00 level. Thursday’s OPEC+ meeting can have a significant impact on the price going forward. Sources suggest that the JMMC made no recommendations on oil output at their Wednesday meeting. 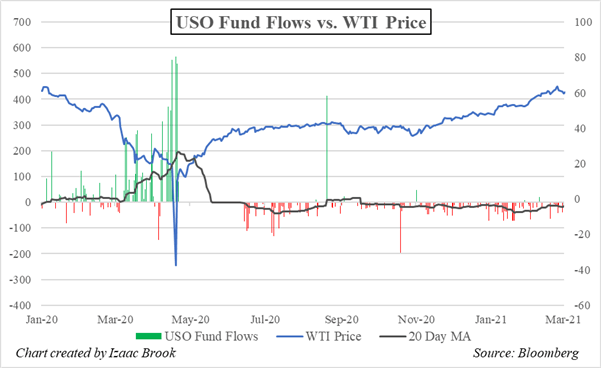 Despite the strong rise in crude oil prices in 2021, the USO ETF has seen consistent outflows since the beginning of the year. In total, the ETF has seen nearly $1 billion in net outflows since January 1, with very few days of inflows. This discrepancy between oil price movements and ETF-derived sentiment may be driven by profit taking activities or from expectations that oil prices do not have much more room to climb higher as the world economy still remains far from its pre-pandemic potential.

Volatility in Treasury yields has the most direct impact on the bond market, where interest rate shocks can quickly have a material impact on the value of individual debt securities. The rise in longer-term US interest rates that began in early January as had a variety of impacts on the different classes of bond funds. 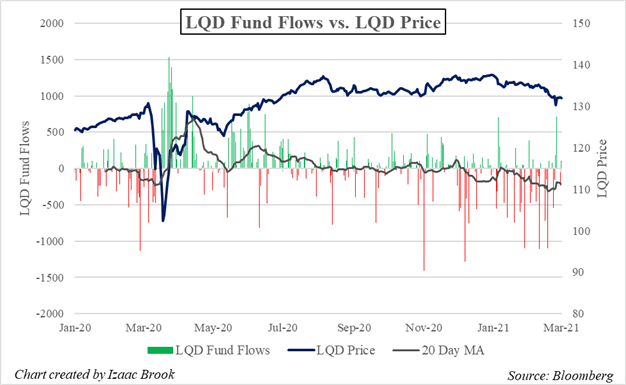 The LQD ETF, which tracks investment grade corporate bonds, has seen consistently large outflows since January 1, around $7 billion net. A number of these flows are of a similar size to the ones seen in March 2020 before the Federal Reserve stepped in to backstop the corporate debt markets, spurring on huge inflows in April as investors attempted to front run the Fed. With the expiration of the Fed’s corporate bond purchase programs at the end of 2020, investors have shied away from related ETFs. 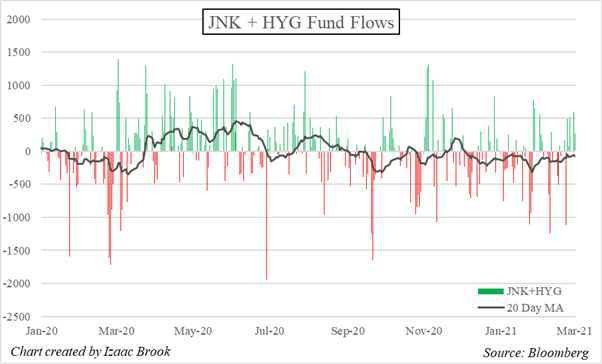 HYG and JNK, two corporate bond ETFs that track high yield “junk” corporate bonds, have also seen large outflows in 2021. Since January 1, the two ETFs have seen a combined net outflow of around $5 billion. Junk corporate debt levels were already at record highs before the onset of the pandemic and issuances increased heavily following the Fed’s announcement of support as companies rushed to take advantage of low yields. While these markets remain steady for the time being, a rise in risk-off sentiment could trigger stresses that could reverberate throughout markets. 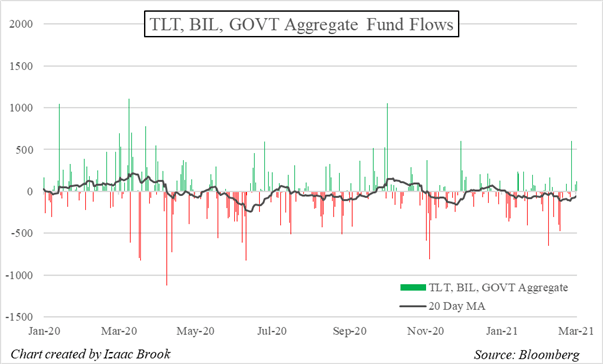 Flows into US Government Bond ETFs have fared well from recent moves in interest rates. While the aggregate fund flows for the TLT, BIL, and GOVT ETFs has been mostly negative since early January alongside the rise in longer-term yields, the day following late February’s yields volatility saw the largest inflow into these ETFs since late November.

While Fed officials have welcomed the rise in yields, many market participants expect the Fed to turn to a yield curve control policy later in the year if the march in yields continues higher. Increased Fed purchases would drive the price of Treasuries higher, netting gains to investors who purchased these bonds ahead of the Fed’s purchases.