Dow Jones Industrial Average index (Dow) futures are oscillating between gains and losses after falling 0.47% on Thursday. This may set a sour tone for Asia-Pacific markets. Investors are wary about the US fiscal stimulus plan, which was pending due to dissents between Republicans and Democrats on the size of the package. With the Fed, BoE and BoJ deciding to hold fire and adopt a “wait-and-see” attitude this week, US fiscal stimulus left to be a potential catalyst to revitalize equity market sentiment.

Yesterday’s BoJ and BoE meetings gave little clues in terms of monetary policy shifts. Both central banks have left the interest rates unchanged and have maintained the current level of asset purchases amid economic uncertainties.

Asia-Pacific markets face a quiet calendar day and thus may drift along the ebb and flow. The volatility index (VIX) has fallen back to around 30.0. Read more on our economic calendar website. 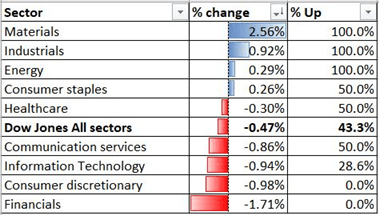 Technically,the Dow is consolidating at the lower half of its “Bollinger Band” over the past two weeks. The lower bound of its Bollinger Band serves as an immediate support level, which is now at 27,430. An immediate resistance level can be found at 28,200 – the 20-Day Simple Moving Average (SMA) line. Momentum indicator MACD remains in bearish set-up, which suggests that there might be more consolidations ahead.

Germany’s DAX 30 index recovered most of the post-Covid losses in the past six months and traded just beneath its all-time high of 13,830. The index has likely formed an “Ascending Triangle” (chart below), with a strong resistance level found at the upper ceiling of 13,300. The overall trend remains bullish as its 20-, 50- and 100-Day SMAs are trending upwards.

Australia’s ASX 200 index opened marginally higher on Friday after falling more than 1% a day before. This happened despite a much stronger-than-expected employment data release yesterday. The short-term trend of ASX 200 index is bearish-biased, as the index failed to break above its “Ascending Triangle” and since entered into a correction. An immediate support level can be found at 5,810.